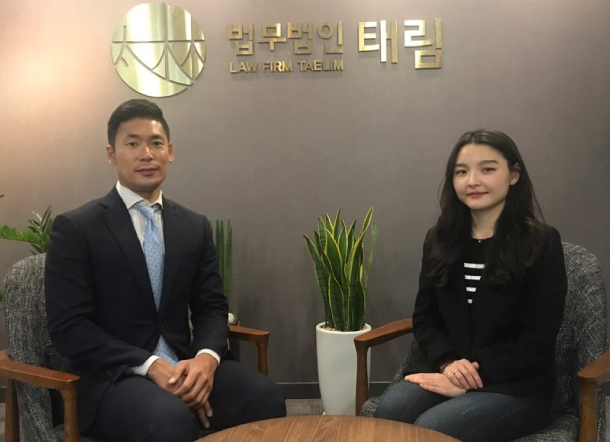 Lawyer Park Hyun-sik, left, of the law firm Taelim and lawyer Choi Cho-rong, right, the CEO of a class-action suit platform “Angry People,” at the office of Taelim in Gangnam District, southern Seoul. The two lawyers are representing plaintiffs in a class-action lawsuit against Korean Air Lines. [JOONGANG ILBO]

Nearly 2,000 Korean Air Lines (KAL) customers have fired the opening volley in a legal battle to get the airline to walk back changes it made to the way it honors the “miles” earned through affiliated credit cards.

On Monday, law firm Taelim filed a complaint with the Fair Trade Commission requesting a revision of alleged unfair terms and conditions of the air carrier’s change in its mileage program.

Taelim is the legal representative of 1,817 consumers who have filed a class-action suit against Korean Air Lines.

The group action is a backlash to Korean Air Lines’ revised SKYPASS membership reward program announced on Jan. 13. Customers have expressed complaints that such changes will disadvantage economy passengers by downgrading the value of their existing air mileage.

The JoongAng Ilbo on Jan. 15 sat down with attorney Park Hyun-sik of the law firm Taelim and Choi Cho-rong, CEO of “Angry People,” a website for crowd-sourced class-action lawsuits, at Taeim’s office in Gangnam District, southern Seoul.

But Park and Choi argue that mileage is consumers’ own property. They claim that consumers paid annual fees via a specific brand of credit cards to acquire extra mileage, and in doing so gave up benefits they could obtain by using a different credit card. Noting that Korean Air Lines also receives money from credit card companies in return for providing mileage, they argue the benefits should be classified as property.

According to Park, the Korea Fair Trade Commission (FTC) already recognized the rights of ownership for mileage points. In 2003, the commission ordered the company to take corrective measures to nullify its policy changes, stating that mileage rewards are not offered for free and have independent economic value.

“If KAL lowers the value of customers’ mileage, under Clause 149 of the civic law, customers have the right to sue the air carrier for compensation since it interferes with individual interests,” Park added.

The fact that Korean Air Lines records mileage points as “property” in its accounting also backs up the lawyers’ claim that the airline views mileage as money.

“It does not make sense for KAL to claim that mileage is a service, not money, because it’s a liability worth about 15 to 20 won per mile,” said Choi.

In 2011 the Seoul Southern District Court ruled that customers’ rights to use mileage should be protected under property rights.

Korean Air Lines has maintained its stance that the new rewards program is beneficial to consumers.

“KAL offered more mileage than other international carriers such as British Airways, the airline Emirates, Singapore Airlines and Japan Airlines,” the company argued in a press release.

Korean Air Lines has also said that the changes allow customers to purchase more discounted flights, meaning that in many instances they won’t need to cash in as many miles per flight as they did previously.

Park and Choi pushed back against that national air carrier’s claim, saying there are fewer benefits returned to customers in the changed system. For an instance, they said, even though Korean Air Lines will offer more mileage for first class passengers, most flights do not provide first class seats.

According to the law firm’s written request to the trade commission, 75 percent of Korean Air Lines customers will see their benefits decrease by 14 to 68 percent after the new revised rewards program takes effect. Meanwhile, the amount of mileage needed to buy a plane ticket will increase by up to a maximum of 107 percent.

According to the judicial review paper submitted to the FTC by Taelim and Choi, the new mileage rules will boost Korean Air Lines’ profitability by 150 billion won ($127 million).

Both Park and Choi noted that they use the same brand of credit card that partners with Korean Air Lines for mileage points.

The pair called on the airline to stick by customers “who have been loyal to the airline for the past 17 years.”