These washers and driers make a smart pair

These washers and driers make a smart pair 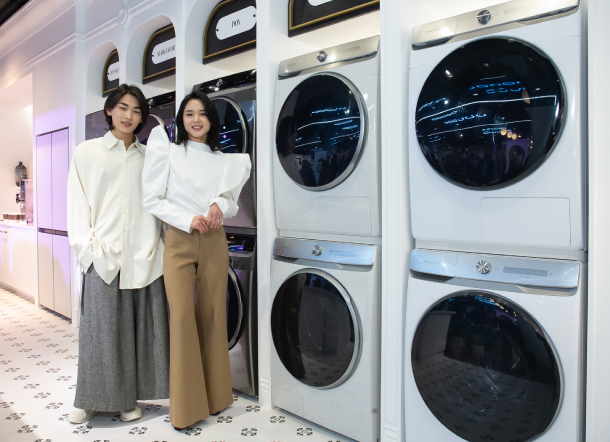 Samsung Electronics introduced a set of home laundry machines that work together and with artificial intelligence to make laundry day faster.

Samsung merged the control boards of the washing machine and drier into one in its Grande AI. The machines can suggest the best operation mode, according to the type of laundry and the user’s preferences.

The software automatically decides which drying mode would best suit the laundry. It takes into consideration weather information and the owner’s preferences. The AI technology in the Grande AI models is based on user data collected from more than 500,000 laundry machines, the company said.

The Grande AI determines the right amount of liquid detergent for washing according to the laundry’s weight. On top of that, it is capable of measuring how dirty the laundry is to work out the optimal amount of detergent, water and operation time. The drier has an upgraded compressor and new heat exchangers, which allows the washing and drying or a shirt in 36 minutes.

The machines are more environmentally friendly and simpler to use. According to an internal survey, 63 percent of washing machine users opted for standard operation mode when they did their laundry because it was the easiest choice.

“Washing machines and driers are an object of fear to people like me who only occasionally use them,” said Lee Jae-seung, Samsung’s executive vice president and head of digital appliances, at a Wednesday press event in Gangnam, southern Seoul.

“The Grande AI machines will change this experience.”

The Grande AI line is the second in Samsung’s “Project Prism,” a strategy to develop home appliances that offer new experiences to a wider range of customers. The first were the Bespoke refrigerators unveiled last June that allowed customization of the color of fridge doors and modular sub-units. That series was a success, and cited as a revenue booster for Samsung’s consumer electronics business in last year’s third quarter.

“We’ll continue what we’ve been doing,” he said. “There are also things I’ve been thinking about since I was the development head. One is eco-friendliness. That’s one segment we want to strengthen.”

Kim added the third product in the Prism series will come out in the first half of this year but did not give any more details.