In ‘Birds of Prey,’ the ladies are flying together: Harley Quinn is back with a group of badass women to save the day

In ‘Birds of Prey,’ the ladies are flying together: Harley Quinn is back with a group of badass women to save the day 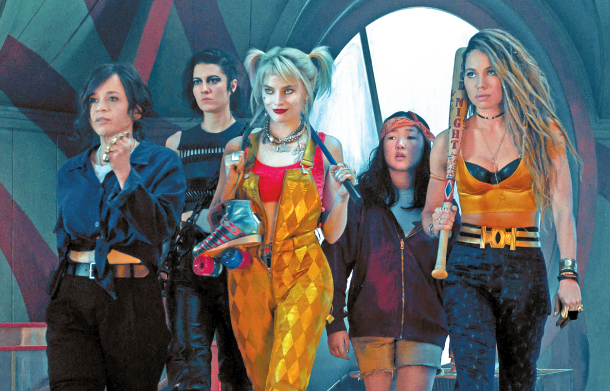 Harley Quinn, played by Margo Robbie, above, and the Birds of Prey superheroes set out to conquer Gotham City in “Birds of Prey (and the Fantabulous Emancipation of One Harley Quinn).” [WARNER BROS KOREA]

Although “Suicide Squad” got its share of bad reviews when it hit the box office three years ago, viewers and critics alike were unanimous about one thing: Margot Robbie nailed the role as DC Universe’s favorite vigilante, Harley Quinn.

Apparently DC Films thought so too, as evidenced by their upcoming film “Birds of Prey (and the Fantabulous Emancipation of One Harley Quinn),” which depicts what happens to Harley Quinn after she and Joker break up.

However, if you thought this was going to be a one-woman show about Harley, you’ve got it wrong.

Alongside the more vulnerable Harley, the audience is also introduced to a bunch of female characters who may only be familiar to die-hard comic book fans.

Black Canary, played by Jurnee Smollett-Bell, owns up to her name by emitting hypersonic screams. She’s not yet aware of her full potential, so she works as a singer in a club owned by the villain Roman Sionis.

Huntress, portrayed by Mary Elizabeth Winstead, is known to the Gotham City as the “crossbow killer” and has spent her whole life seeking revenge for the death of her family after they were killed in the hunt for a diamond encrypted with information about an unfathomable amount of money. 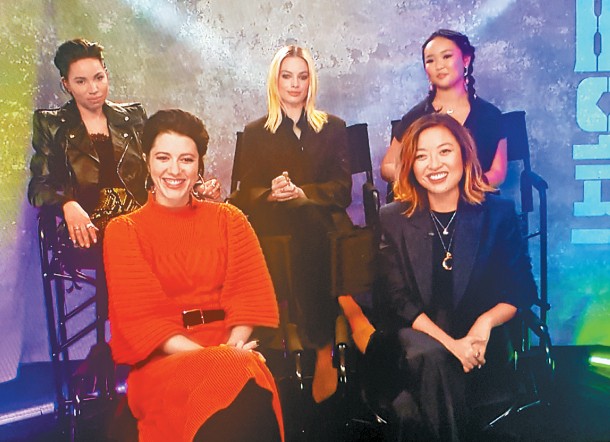 On the other hand, Renee Montoya, played by Rosie Perez, is a regular police detective with a fiery determination for justice.

Last but not least, Cassandra Cain, played by Ella Jay Basco, is a kid pickpocket who unknowingly steals the diamond that Sionis is looking for.

The film is an origin story, the beginning of how an unlikely group of characters get together to form the Birds of Prey. The all-female superhero team was featured in several comic books and special editions over the years.

Although the film’s producers did their research using a pile of original comics, they wanted to add their own perspective as well, according to director Cathy Yan.

“The takeaway [of this film] is that we are showing these women vulnerable, raw, imperfect but still empowered, especially at the end together,” Yan said at a live press conference that took place at CGV Yongsan, central Seoul, on Tuesday evening.

The film, made up of a fairly even amount of each characters’ story, is told from Harley’s perspective.

“You hear the story from her point of view, which is incredibly unreliable and erratic and colorful and violent and weird, just like her,” Robbie said. “[But] most of all I just didn’t want to stop playing Harley.”

When asked whether or not she was afraid to show a new, more human side of Harley after audiences loved her character in “Suicide Squad” for her unpredictability, Robbie said that she saw things differently.

“The Harley we met in the first ‘Suicide Squad’ film had the prestige of protection in a relationship with the Joker. She was always going to be cocky, but she had a very steady confidence that things were always going to be taken care of no matter how bad they got,” Robbie said. “So she’s a little more shaky, a little more vulnerable than we’ve seen her before, which is fun for us to explore.

“But we also do get to see when she has to feel a sense of responsibility for a young kid […] we see her wrestle with that. Because I do love these shades of light and dark that Harley has in the comics, and we saw briefly but not to such an extent in ‘Suicide Squad.’ She does, every so often, have a conscious. (laughs) When it kicks in, she is compelled do to the right thing ,and to watch her struggle with that is fascinating.”

The rest of the cast also showed affection for their respective characters.

Winstead mentioned that she loved the Huntress’s singular devotion to attaining her goal.

“I really loved Huntress’s just complete and total commitment to the mission - at certain angles she could be viewed as villainess because she kills without any compassion or care for her victims, but in her own mind she’s a real hero. According to her value system, she’s doing absolutely what’s right - she’s getting justice for her family,” Winstead said. “[After] the mission is completed, [however], she doesn’t know what to do with her life from then on, and I think you kind of see her realize that maybe justice for herself isn’t the most important thing. Maybe she could find justice for other people as well.”

In the film, Black Canary doesn’t yet realize the extent of her power and follows orders from Sionis against her will.

“As an actor, it was challenging to play both: [strength] and vulnerability, but I really enjoyed playing someone who encompasses that duality,” Smollett-Bell said.

“I also remember how Canary has so much heart,” Yan added. “In that, she’s sort of the moral compass in the movie in a way that Harley is not. (laughs) She’s not capable of that power yet, and I think that’s the journey Canary goes on in the movie.”

The director told the press that she did her best to cast the actors who most closely mirrored the personalities their characters had.

“I also tried to cast actors who I think embodied the soul of their characters so there isn’t so much emotional cognitive distance between an actor and the roles they’re playing - I really believe [they] are perfectly cast for these characters,” Yan said.

The actors not only seemed to match their characters well, but also their fellow castmates.

“Being on this film set in particular, given the fact that it was an ensemble of predominantly female cast, [knit] us in a very unique and specific way because it doesn’t happen that often where you’re working with so many other actresses,” Robbie said.

“For us, the bond happened quite quickly and I think it went deeper than sometimes you [expect] it could get […] I mean we haven’t seen a female ensemble R-rated action film - especially not in the comic book world - so I think the idea that we might be giving the world something that they want and haven’t seen before is exciting and thrilling.”