No huge profit for the North? No problem

No huge profit for the North? No problem 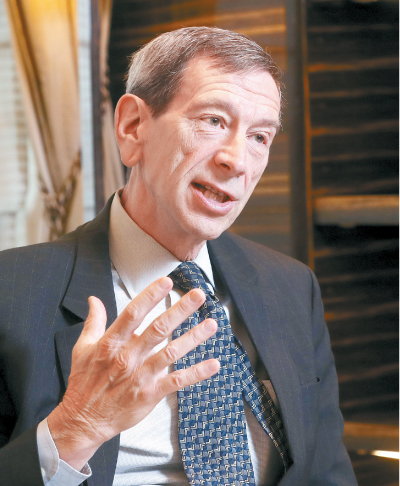 Robert Einhorn, a senior fellow in the Brookings Institution’s Arms Control and Non-Proliferation Initiative and the Center for 21st Century Security and Intelligence, sits for an interview with the JoongAng Ilbo at Lotte Hotel in central Seoul on Jan. 22. [KANG JUNG-HYUN]

Robert Einhorn, a former special adviser for nonproliferation and arms control at the U.S. State Department, said that unless individual tourism to North Korea reaps huge profits, the United States should not try to block it.

Einhorn, a senior fellow at the Washington-based think tank the Brookings Institution, sat for an interview with the JoongAng Ilbo at a hotel in central Seoul on Jan. 22 and addressed the recent controversy surrounding whether South Korea needs permission from the United States to go ahead with individual tourism to North Korea.

“If tourism is not prohibited by sanctions and it does not generate huge amounts of revenue for the North Korean regime, then the United States should not try to stand in the way,” said Einhorn.

The United States will hold a presidential election later this year, but resolving the Korean Peninsula situation continues to remain murky.

North Korean leader Kim Jong-un has vowed to take on a new path after two years of denuclearization negotiations with the United States.

Einhorn noted, however, that North Korea is unlikely to conduct a nuclear test or intercontinental ballistic missile (ICBM) test, pointing out, “I think the North Koreans know that if they engage in major provocations, then they could alienate the Chinese and the Russians.”

A. I think Ambassador Harris is correct that this is an issue that should be discussed bilaterally between United States and the ROK [Republic of Korea]. It is not a strictly domestic issue. It has important international implications, and it has important implications for U.S.-ROK strategy for dealing with North Korea. So of course it should be a subject for consultation. However, that does not mean that the United States should have a veto over an ROK position. The ROK is a sovereign country. It can go ahead and support these individual tourist ideas. It would have to take into consideration some important factors.

It’s often asserted that individual tourism is not precluded by existing sanctions. Experts need to look at that and decide. But if individual tourism is not prohibited by sanctions, then I think that the ROK has a sovereign right to go forward. I think it has to take certain things into account. I mean, an important factor is how much revenue will go to North Korea. And it should look at how much revenue is going, and compare that to the revenues that North Korea acquires from Chinese revenues. If it is a relatively small amount, then I don’t see a big problem with it. Again, I say the United States should not have a veto over the ROK decision, but it should keep in mind that North Koreans do have a veto over individual tourism. They can say no... The track record in recent months suggests that the North has decided to shut out South Korea. So it may be reluctant to accept South Korean tourists. One thing is for sure: North Korea will not decide to accept South Korean tourists for the sake of better inter-Korean relations and people-to-people exchanges and all of that. It would do that for only one reason - if it gets enough hard currency out of it. That would be its dominant consideration. But my own preference, if tourism is not prohibited by sanctions and it does not generate huge amounts of revenue for the North Korean regime, then the United States should not try to stand in the way.

North Korean leader Kim Jong-un declared that he would take a new path, if the United States did not show sincerity at the end of last year. What kind of provocation do you think North Korea would take?

Will it go ahead and conduct a nuclear weapons test or an ICBM test? I doubt it. I think the North Koreans know that if they engage in major provocations, then they could alienate the Chinese and the Russians. The Chinese are giving them lots of support in terms of food supplies, energy, in terms of tourists. The Russians and Chinese are in New York trying to get a [United Nations] Security Council resolution that will provide sanctions relief. I think Kim Jong-un might be reluctant to alienate them with a major provocation. I think at least for the time being, he will continue with activities below the threshold of major provocation. Activities such as short-range missile tests, tests of submarine-launched missiles, tests on the ground of large engines that might go into ICBMs. He might make major announcements saying, “We have ICBMs already deployed,” things like that. I hope he’s sensible enough to not escalate because he would know that there could be a strong reaction; not just from Russians and Chinese - the United States and the ROK would react by strengthening their own defenses, missiles defenses and other defensive capabilities. They would also respond by trying to ratchet up sanctions even more. So, hopefully Kim Jong-un will be sensible enough not to be too provocative.

If Kim Jong-un conducts a provocative test, do you think there is a possibility U.S. President Donald Trump could carry out military action against North Korea?

No. I think it is exceedingly unlikely that the United States will react with military strikes or any kind of military action. After all, North Korea conducted these kinds of activities before, and the United States did not react with military responses, and I think especially this year, in an election year, Trump does not want to risk major armed conflict on the Korean Peninsula, which would be incredibly destructive. I think Trump, despite his aggressive rhetoric, wants to keep America out of wars, especially out of wars that would be so costly as one would be with North Korea. Trump approved the operation to kill [Iranian commander Qassim] Suleimani, but that is very different. The Iranians would not be in a position to conduct very, very damaging retaliatory strikes.

Do you think the U.S. presidential election will affect policy toward North Korea?

I think it could affect policy because No. 1, in an election year, President Trump doesn’t want his policy toward North Korea to appear to be a failure. So I think he will try with his public statements and tweets to suggest that negotiations are still alive, that he still has a good personal relationship with Kim Jong-un and that he continues to hope that Kim will do the right thing and agree to resume negotiations and proceed down the path to resolution. I think he has a political interest in showing that his policy hasn’t failed and that negotiations are still possible. I think he also has an interest in not getting engaged in an armed conflict with North Korea in an election year. He said he wants to keep America out of wars. He certainly does not want to start a war with North Korea in a year when he is seeking re-election.

There is a speculation that the United States may be satisfied with North Korea’s incomplete denuclearization and lift sanctions or normalize diplomatic relations unless North Korea developed an ICBM. What do you think about this perception?

Could you give us an example of reasonable interim compensation?

A compensation package for such an interim deal might include a declaration ending the Korean War, establishing liaison offices in Pyongyang and Washington [and] humanitarian relief. Perhaps if the U.S. and ROK militaries could agree, some scaling back of joint military exercises, maybe some exceptions to existing sanctions to permit inter-Korean projects, perhaps some exceptions to Security Council sanctions that would permit North Korea imports of petroleum products.

The United States is demanding that South Korea should pay $5 billion for defense cost sharing. What do you think about this figure?

I think this demand is excessive. Yes, it is reasonable for the U.S. to ask all of its allies to contribute more to the common defense. The U.S. is doing that with respect to its NATO allies, and I think it is reasonable with respect to its Asian allies as well. But the amount has to be reasonable. And it has to take into account all that our allies are already doing in the common defense. I think the ROK is already doing a lot, perhaps there’s more it can do, but it should not be of such a nature five times the current amount. I think it is important for the allies to reach an accommodation on this quickly because it is undermining confidence in the alliance, and that is very damaging. We may be approaching now a period of prolonged confrontation with North Korea. To do that effectively, the allies have to be united, and this is an issue that is undermining the unity and solidarity of our alliance.