Koreans fleeing from Wuhan not wanted

Koreans fleeing from Wuhan not wanted 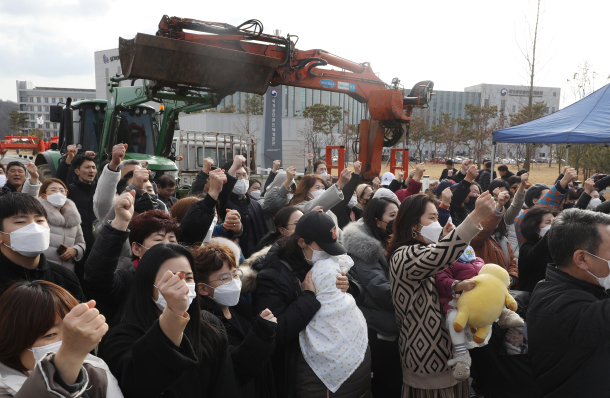 Residents of Jincheon County in North Chungcheong hold a rally Wednesday in front of the National Human Resources Development Institute, blocking it with tractors and vehicles, to protest the government’s decision to use it as one of two public facilities to isolate hundreds of Koreans airlifted out of China today and tomorrow after the outbreak of the new coronavirus.[NEWS1]

The 700 Koreans being evacuated from Wuhan will be glad to get out of the plague zone - but they shouldn’t expect a warm welcome home.

People living near the two facilities in Korea where they will be quarantined expressed their discomfort at the plans Wednesday.

“There are many families in this neighborhood with two to three children,” a 41-year-old woman who wished to be identified only as Choi said Wednesday. Choi lives near a government facility in Jincheon County, North Chungcheong, that’s been chosen to house some of the Wuhan evacuees for 14 days, which is the incubation period for the Wuhan coronavirus.

“I’m flabbergasted and upset that the government chose Jincheon for the isolation facilities. No matter how rushed they are, authorities shouldn’t make unilateral decisions without asking our opinion.”

The second facility is in Asan, South Chungcheong.

Wuhan is the epicenter of the coronavirus outbreak, which has so far infected nearly 6,000 people in China and a handful of other countries. The total death toll was 132 by Wednesday, all in China. Korea has confirmed four cases so far.

Some 700 Korean nationals will be airlifted from Wuhan via four chartered flights today and tomorrow.

Following its Tuesday announcement about the airlift, the Korean government announced Wednesday afternoon that two public facilities would be their homes for 14 days.

One is the National Human Resources Development Institute in Jincheon, about 90 kilometers (56 miles) south of Seoul as the crow flies, which is used for training government officials.

The other is the Police Human Resources Development Institute in Asan, South Chungcheong, 86 kilometers south of Seoul, where police officers train.

The Koreans flying in from Wuhan are expected to be assigned to dormitories in the two facilities. Patients who show symptoms of the virus will be immediately transferred to one among 29 government-designated hospitals scattered across the nation for isolation and treatment.

Local health officials said all 700 people will be screened before they board their flights in Wuhan and if they show symptoms, they won’t be allowed on.

The Korean government said none of the 700 people so far have been diagnosed with the virus.

In Jincheon and Asan, residents immediately expressed fears that they might be exposed to the illness.

The virus is transmittable between humans, according to Chinese authorities, though local health authorities have so far downplayed the possibility of transmissions during the incubation period.

Ms. Park, 39, said she’s decided to take matters into her own hands: by moving out of Jincheon.

“I’m leaving this place to stay at my relative’s place or at some other lodging facility,” said Park, who insisted on being identified only by her surname for this article. “First thing’s first. I’m going to buy some facial masks and detergent.”

Kim Jae-ho, 63, a resident of Asan, chimed in. “What was the government thinking to push through the plan without canvassing opinions from the local community?” he asked.

Some Asan residents blocked the entrance of the Police Human Resources Development Institute with farm trucks in a show of defiance.

In a statement Wednesday, a local branch of the Citizens’ Coalition for Economic Justice representing Asan and the neighboring city of Cheonan, South Chungcheong, urged the government to isolate the returnees in the country’s evacuation center for natural disasters near Gimpo International Airport, asking why the government chose locations so far away from their point of arrival.

The returnees are supposed to land at Gimpo airport in Gangseo District, western Seoul.