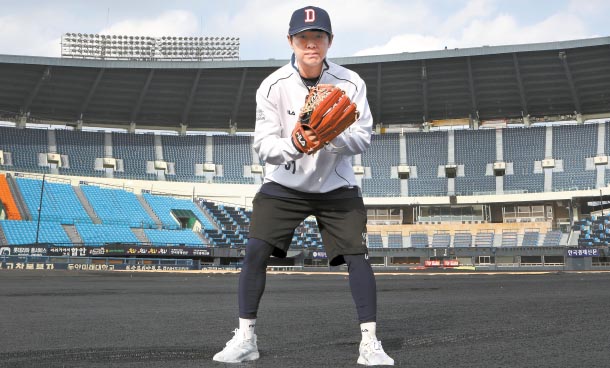 Jung Soo-bin of the Doosan Bears poses for a photo at Jamsil Baseball Stadium in southern Seoul on Jan. 20. [PARK SANG-MOON]

Curveball Interview
Over the next few weeks, the Korea JoongAng Daily will meet with athletes from across the sporting world to discuss how they got their start and earned their fame as well as their lives on and off the field.

This week’s interview is with Jung Soo-bin of the Doosan Bears. 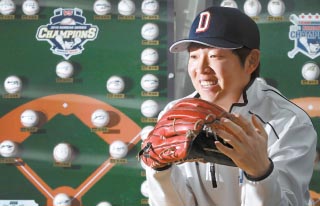 While his baby face may give the impression that he is not a threat to other players on the field, he does his best to counter that false assumption with a serious persona during games and in interviews. But when Jung Soo-bin is with his friends, he says it’s a different story altogether.

“I think there’s a difference between the image that’s shown on the field and how I am off the field,” Jung said. “When I’m with people I feel comfortable with, I think I have a different personality. I think I’m pretty funny.”

It may have been this fun and lighthearted side to Jung that got him involved in baseball in the first place.

In elementary school, Jung was a runner for his school’s track and field team.

“I really liked sports at the time,” Jung said. “I ran track, played soccer, swam and so much more.”

He started to focus more on baseball when a neighboring school showed interest in him.

One day, his homeroom teacher, who was asked to look for players by a scout from another school said, “Raise your hand if you want to play baseball.” Jung just lifted his hand high, without a second thought.

“Another school that had a baseball team came to scout some young players who liked baseball,” Jung said. “So I volunteered for that team too, and there, I played alright. So the school suggested that it would be a good idea for me to pursue baseball.”

His experience on the track and field team meant he had speed. He got to play in all the positions, but it was outfielder that suited him the most.

When he was in high school, he also tried his hand at pitching.

“In terms of [playing as a] pitcher, everyone does it when they’re young,” Jung said. “The good thing about playing as a pitcher was that my shoulder got stronger. But I didn’t want to become a pitcher. Since being a fielder suited me better, I thought of pitching as a hobby.”

Much like his start in the sport, his decision to turn pro was not clear-cut.

“In elementary, I was too young to know anything,” Jung said. “But once I got to middle school and high school, I started [to realize that] I’ve been playing baseball for a long time. Then, I started seriously thinking about trying to become successful by playing baseball. I think right between graduating from middle school to high school, that’s when I started thinking about [being a pro].”

Back when little Jung was awaiting his turn to get drafted by a KBO team, he was hoping for any club but the Doosan Bears.

“At the time, the Bears had such a strong team of outfielders,” Jung said. “Once the Bears called my name, I just thought to myself that I’ll have to work hard in the futures league team for a few years.”

However, in spite of his fears of having to face tough competition for a starting spot, he got in action with the Bears right away.

Standing only at 1.75 meters (5 feet, 9 inches) and weighing 70 kilograms (154 pounds), Bears’ Jung doesn’t have the typical physique of a baseball player, but on the field he is all-mighty, and in his rookie season, he defied expectations.

In the 85 games he played throughout his rookie season, he left quite the impression on not only the club but on the fans too and finished with a 0.264 batting average with 3 home runs and 61 hits. Although he wasn’t a slugger, he was quick, and Jung particularly stood out in defense.

Following his incredible debut season, he quickly earned the nickname “man of Autumn,” thanks to his transformation into a completely different player once the weather cools down.

Jung went from strength to strength.

In 2015, when the Bears advanced to the Korean Series, Jung played in four Korean Series games and earned himself an impressive 0.571 batting average with five RBIs and 6 runs. Of all these impressive stats, his on-base percentage of 0.647 stood out the most and was undoubtedly the leading factor in Jung being named the 2015 Korean Series MVP.

“During the awards ceremony, when they called my name as the winner of the MVP, everyone looked at me,” Jung said. “I got goose bumps. When the fans cheer for me, I feel blessed to play baseball.”

Jung owes some of his success to the rituals he insists on sticking to before games.

“On days when I play well, I remember what I ate for lunch and what I wore. And I eat and wear the same thing before the game the next day,” Jung said. “One time, I ate the exact same food for a week.”

That habit goes both ways, and he refuses to re-eat or re-wear anything from days when he plays badly, too.

Also similar to most professional athletes, Jung’s career has had its ebbs and flows.

“I’ve never thought about that except once,” Jung said. “I think it’s during 2016 season. It was my 12th year as a pro, but I think that was the hardest time [for me]. I didn’t want to play baseball and thought [baseball] was too difficult. For the first time, I started to think that baseball is really difficult and wondered why I chose this, half seriously and half-jokingly.”

Perhaps some time away from the game would be the refresher that Jung so desperately needed, and this break came in the form of his mandatory military service.

However, serving his country didn’t take him away from the game entirely as he joined the Police Baseball Team.

After he got discharged from the military and returned to the Bears, he didn’t need such time to adjust back to his team. In the 26 games after his return in the 2018 season, Jung finished with a 0.367 batting average with 23 RBIs and five stolen bases.

“Since I played for a long time, even though I missed two years for military service, it didn’t take much time for me to adjust,” Jung said.

He got off to a strong start right from the beginning of the 2019 season. Quite a number of players in the KBO struggled to get used to a new baseball, which has a lower restitution coefficient that can affect the distance it flies, but it seemed as if such change wasn’t a problem for Jung.

But everything changed after a game against the Lotte Giants on April 28.

In the bottom of the eighth inning, while the Bears were leading the Giants 9-2, Jung, who was the leadoff at the time, was hit by a pitch from the Giants’ pitcher Koo Seung-min. The stadium went quiet as he screamed and dropped to the field. Jung suffered a broken rib but was back on the field in less than a month.

His quick recovery led many to suspect that his injury hadn’t been as serious as was first claimed.

Truthfully, Jung said, it was his strong will and determination that allowed him to make such a quick comeback despite the intense pain he was in.

“Since I returned earlier than expected, some people may have thought that it was a light [injury],” Jung said. “Normally, it would take about two months or so of rest to fully recover from a broken rib. But in my case, I was a professional player who had to continue playing the season. Once I somewhat recovered, I heard from the doctor that I’d be able to play but would be in some pain. I just suppressed the pain and played.“

Upon his comeback, Jung’s defense was just as strong as it used to be, but in terms of his batting, it wasn’t like the start of the season. He tried changing his swing form among other things, but it just took him longer than expected.

“Since I’m not a player who has talent in batting, I just felt like I had to try different things,” Jung said. “I think it’s been a thing since I was little. I didn’t play baseball because I had outstanding skills in batting.”

Speaking of trying different things, off the field, Jung has another hobby - golf - and similar to baseball, his start in the sport came unexpectedly.

“People around me played,” Jung said. “So I went along and just played and found it really fun. Since it’s the only time I can have for a hobby, I started to enjoy it. It seemed similar to baseball, but it was actually very different. I think golf is harder.”

His personal best round, 99. When he first started playing, he was scolded by his friends quite a lot for being loud when others are hitting their shots. Jung said he was used to the loud atmosphere created by stadiums filled with people.

Jung may not have seen the results that he wanted in the 2019 season - finishing with a 0.265 batting average with 117 hits and 26 stolen bases - due to the unexpected injury, but this season, he is more determined than ever.

Heading into his 11th season with the Bears, Jung will once again be competing for a lineup spot. This year, he aims to be more motivated and determined than any other year, as he is one of nine Doosan Bears players set to become free agents (FA) after the 2020 season.

“Of course,” Jung said, “no matter who it is, since the FA is coming up, I start to realize the reality and am trying to work harder [than any other year]. I think this can be overwhelming but at the same time also motivate us to work harder.”

As the Bears will have the most FAs this year, manager Kim Tae-hyung is expecting to see some success with the team for another season, as it can motivate them to play at their best.

“The world of professionals is all about competition, so if there’s a good player, then he should play,” Jung said. “I also always try to stay on my toes and continue to play with a mindset of competing [for the starting spot with the club]. I’m trying my best in defense.”

Jung has also set himself another goal for this season. As he is not a slugger, he will be once again working hard to improve his batting, while taking care of his defensive skills, as well as stolen bases, as that is what makes him stands out in the league.

“It’s probably the same for all the players,” Jung said. “Rather than defense, we think more about batting. I will also be practicing my batting a lot this year, to make up for my weakness last year. In terms of base stealing and defense, I basically have to be better than the others, so I’ll also prepare well for that. Last year, it was just so bad after the injury. If I don’t get any major injury [this year], then I think it’ll be better.”

Jung has a long-term goal, too, but this one is more about pride than statistical performance.

“From now, I think I have about seven to eight years remaining, so first, I want to see [some good results] as an FA, meaning playing well and signing a good contract. Then, until I retire, I want to keep on playing as a starter, and at the end, I want to leave with the fans still cheering for me.”