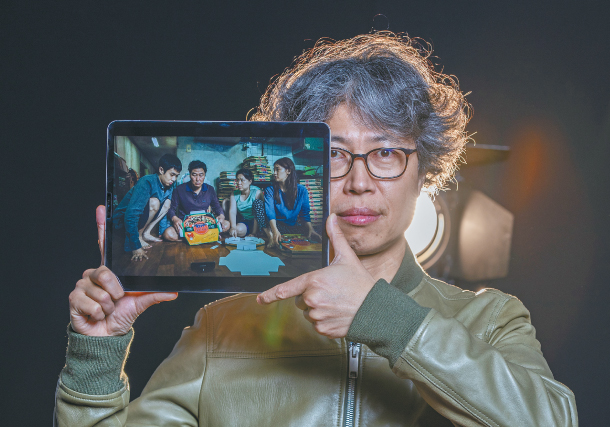 Still photographer Lee Jae-hyuk shows a photo that he took while working on the set of “Parasite” (2019). [KWON HYUK-JAE]

Still photographer Lee Jae-hyuk began taking film stills in 1997. His older brother Gwang-mo, the director of the 1997 film “Spring in My Hometown,” asked Lee to take photos for his film debut.

Having majored in commercial photography at Kyungsung University, Lee stumbled upon the job of a still photographer.

He once tried to stay away from the job to produce films and other kinds of photos but found himself coming back to a film set while working on “The War of Flowers” (2006), and it was then that he knew it was “his way.”

Recently, however, the 50-year-old photographer thought to himself, “I have no regrets if I quit my job right away.” That’s because a single photo of his has become world-famous.

The film poster for “Parasite,” above, is inspired by “Portrait of an Artist” (1972) by David Hockney, top. [CHRISTIE’S, LEE JAE-HYUK]

“Of all the posters that were nominated for the Golden Globes and Academy Award, nothing was as captivating as the poster of ‘Parasite.’ Looking at all of the parody posters [that were made], I realized that this photo will be remembered by many people,” said Lee during a recent interview with JoongAng Ilbo, an affiliate of the Korea JoongAng Daily.

The black comedy was released last May in Korea, but it has been on a winning spree and has single-handedly rewritten Korean film history.

The film won the Palme d’Or at the 2019 Cannes Film Festival and a Golden Globe for Best Foreign Language Film. It was recently nominated for six Academy Awards.

Lee was in the United States with the director until early this month.

“Bong barely slept as he was having interviews every single minute. He was mentally exhausted from moving between Los Angeles to New York to appear at various film award ceremonies.”

Lee accompanied Bong at a party held in Los Angles earlier this month hosted by Neon, the film distributor of “Parasite” in the North American region, and took photos of Bong and Hollywood actor Kevin Bacon. “[Leonardo] DiCaprio was also at that party!”

Lee said that everything felt so surreal.

“A friend of mine is working as an assistant director in Hollywood. One day he asked me to pass on his resume to Bong. It was unbelievable when the film won the Palme d’Or, but everything still feels so unrealistic,” said Lee with a laugh.

The film poster went viral along with a quick song from the film known as the “Jessica Jingle,” sung by Ki-jung, one of the film characters.

Lee took the photos for the poster without knowing that the eyes of each actor would be blocked with bars. The actors also had no idea about the censor bars.

“Until we had meetings for the poster and selected the final cuts, there was no mention of censor bars. When final posters came out, there were two different versions - one with the bars and the other without the bars. The poster with the censor bars had its own feeling. It was an idea of Kim Sang-man, who created the poster.”

Kim is a poster designer and filmmaker who directed “The Tenor - Lirico Spinto” (2014).

Unreleased stills from “Parasite,” left and center, capture moments from the film that still photographer Lee Jae-hyuk and director Bong Joon-ho say are their favorites. Lee was also the still photographer on set for the film “The Handmaiden” (2016), right, directed by award-winning director Park Chan-wook. [CJ ENTERTAINMENT, GREEN NARAE MEDIA ]

In fact, Lee and Kim attended the same high school.

“He showed me one of the pieces of the swimming pool series of David Hockney and said that he wanted to have that Hockney feeling in the film poster.”

The swimming pool series was made by Hockney after he moved from London to Los Angeles.

Lee said that he assumed that Hockney was impressed by the perfect weather of Los Angeles, because the artist was born and grew up under the overcast skies of London. To Lee, it comes as no surprise that Hockney reflected his feelings in the swimming pool series.

“I went to Los Angeles two years ago for the first time, and I was surprised by the weather there. The weather was so nice. We shot the film poster with lighting that is similar to the sunlight you can expect at noon.”

Only one day was given for the poster shoot and the venue was the garden belonging to the Park family.

The main light was installed high and to the left while another strong light was put on actor Song Kang-ho.

“I showed the drawing of Hockney to the actors so that they could pose for the photo without being too expressive. I took the same photo multiple times to get each actor in focus and later cut and paste all the actors into one photo.”

When asked why the eyes of the characters are barred, “Even director Bong has no idea why. Kim is the only one who knows the answer, and I didn’t ask why. If it still remains unknown, we can leave it as it is,” said Lee.

But he pinpointed the different colors of censor bars. The bars over the eyes of the wealthy Park family are white while the Kim family’s are black. “Even though their faces are partially blocked, they still belong to different classes.”

Over the course of collaborating with Bong, Lee has come to understand why the director is often dubbed Bongtail. The nickname is a compound of the director’s family name and the word “detail,” as he is famously meticulous and spends a great deal of time paying attention to the smallest things on set.

“His storyboards are precise. In the film, there is a scene where human blood blends with Japanese apricot extract. Bong asked the special effects team to create a specific shape with the flying blood and the extract [before they mix with each other mid-air.]”

In the past, still photographers were able to take photos during rehearsals or when the shooting neared its end, but now that photographers can turn off the shutter sounds on their cameras, they can follow around actors as long as they are not distracting them.

Lee followed the actors during every scene throughout the production of “Parasite.”

“On a Bong Joon-ho film set, the cameras are not fixed, and they move a lot. Cameras move along the actors, and we know when to go in and go out.

“You can never beat a genius who keeps trying hard,” said Lee recalling Bong on set.

“When we shot the flood scene, he was cooped up inside the monitor room. He didn’t sleep that much.”

Lee took numerous photos on set, but Bong’s favorite was a photo capturing Kim’s family descending from the affluent neighborhood to their seedy quarter in the pouring rain.

“The photo was taken near the Malli-dong Hill. The director liked the overall tone of the photo because the neighborhood is different from the neat Seongbuk-dong area [in central Seoul]. Some films are highly dependent on actors, but ‘Parasite’ was not like that. Everything from space to props took on lead roles along with the actors.”

When asked to select his favorite still photos from the film, Lee chose two. One captures the moment in which Ki-taek (played by Song) is walking down from the Park family house.

Lee’s other favorite is a photo of Moon-gwang, the housekeeper played by Lee Jung-eun.

“The photo was taken just right after the sunset. Her hair and scarf are flying in the wind. She’s wearing fancy outfits, but she was fired and we see the mansion of the rich family behind her. I told Jung-eun that she looks like a European actress in the photo.

“The real charm of this job lies in capturing a fleeting moment of the actors that they are not aware of.”

Lee mostly finds inspiration from paintings. A drawing he saw at the Museum of Modern Art in New York helped him visualize Ki-taek’s house.

He has also worked on some Hollywood flicks, such as “Equals” (2016) and “Endings, Beginnings” (2019). When Marvel series “Avengers: Age of Ultron” was shot in Korea, Lee participated in the production as a still photographer as well.

Most recently, Lee wrapped up working on the sci-fi flick “Seo Bok,” starring Gong Yoo and Park Bo-gum, and he is set to join a new project with director Choi Dong-hoon. He is also working with director Park to release a book of unreleased still photos from “The Handmaiden.”

The photographer couldn’t ask for more in his career, but still some people ask him why he has not made the transition from still photographer to cameraman. Whenever he gets these questions, Lee said he is upset by the people who see his job as a stepping stone. But veteran still photographers that he has met overseas have inspired him.

Lee met a still photographer in his 70s when he worked on “Okja.”