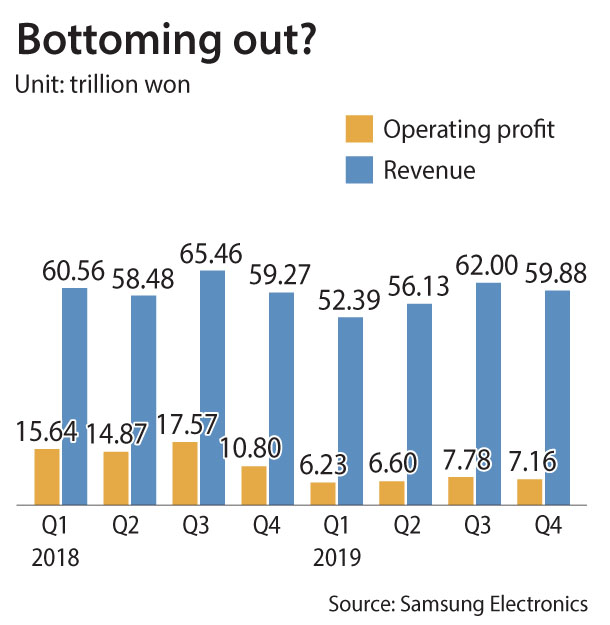 The electronics behemoth, however, predicted a recovery this year in an earnings report released Thursday.

Revenues fell to 230.4 trillion won last year, down 5.5 percent from a year earlier.

But some improvement was evident in the final quarter of last year, with the tech company posting 7.16 trillion won in operating profit, a 33.7 percent decrease over a year earlier, and 59.88 trillion won in revenue, up 1 percent, both in line with an earnings guidance announced earlier this month.

The semiconductor business underwent a cyclical downturn last year. That business brought in 14.02 trillion won in operating profit last year, a 68.54 percent decrease compared to the previous year, on 64.94 trillion won in revenue, down 24.7 percent.

“The fourth quarter was affected by the decline in the prices of dynamic random access memory (DRAM), which led to an overall decrease in profitability,” the company said in a statement.

The company projected a continued downturn through the first quarter of this year due to seasonal factors but said a recovery was expected during the rest of the year.

“DRAMs are expected to experience sound increases in demand this year,” Han Jin-man, senior vice president, said in a conference call. “Especially going through the second half of this year, DRAMs could see a rebound in demand due to increased investment in the data center industry.”

Samsung estimated its so-called DRAM bit growth at around 15 percent and that of NAND flash memory in the mid-20 percent range.

Bit growth refers to the amount of memory produced by a company and is a key index of demand.

Otherwise in the semiconductor business, Samsung said it had high hopes for its foundry business, or custom chipmaking, this year, expecting double-digit growth in revenue.

The IT and mobile communications division, which handles smartphones, generated 9.27 trillion won in profit, down 8.8 percent compared to the previous year.

Releases of a new Galaxy S high-end phone, foldable phones and 5G-enabled smartphones will help boost profits in the first quarter, it said.

The new Galaxy S phone is set to be announced on Feb. 11.

As for 5G phones, Samsung is currently the second-biggest player after Huawei in terms of shipments. According to Strategy Analytics, Samsung’s share of 5G smartphone shipments was 35.8 percent in 2019, after selling a total of 6.7 million units.

The profit from the consumer electronics business went up 29.2 percent to 2.61 trillion won last year, helped by improved sales in televisions, refrigerators and air-conditioners.

The display division suffered a profit decline of 37 percent to 1.58 trillion won in 2019 due primarily to increased costs of production.