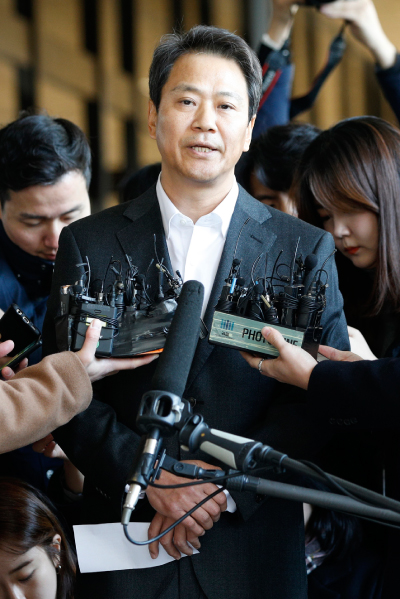 Im Jong-seok, President Moon Jae-in’s former chief of staff, voluntarily faced the press on his way to be questioned as a criminal suspect Thursday and attacked Prosecutor General Yoon Seok-youl for conducting a politically motivated investigation of him.

Im, who served as Moon’s chief of staff from May 2017 till January 2019, arrived at the Seoul Central District Prosecutors’ Office in southern Seoul around 10 a.m. and addressed the press before entering the building. Im was questioned by prosecutors about an allegation that top Blue House officials abused their power to influence the Ulsan mayoral election in 2018.

The presidential office is accused of masterminding a police probe against then-Ulsan Mayor Kim Gi-hyeon of the opposition Liberty Korea Party (LKP) in order to help Moon’s friend, Song Cheol-ho, win the race. Song and 12 others were indicted on Wednesday on charges of election law violations.

“The prosecutors in Ulsan did not address this case for one year and eight months but handed it over to the Seoul Central District Prosecutors’ Office last November on the order of Prosecutor General Yoon,” Im said. “I am confident that the handover was made with a strong motive.

“Can they really prove that I intervened in the Ulsan mayoral election?” Im continued. “If not, will they apologize and take responsibility?”

Im said the prosecution must think about why it is losing public trust instead of bragging about its powers.

Im didn’t have to face reporters thanks to changes in regulations made by the Ministry of Justice last December. Now, prosecutors are barred from summoning a suspect publicly. No media access is allowed to people appearing for questioning or arrest.

Former Justice Minister Cho Kuk was one of the first beneficiaries of the new regulations - which were passed during his brief period as head of the Justice Ministry. He did not face the press when he came in multiple times for questioning in various corruption and abuse of power cases.

Im faced the media voluntarily but did not answer reporters’ questions.

The public security investigation department II of the Seoul Central District Prosecutors’ Office believes that Im was at the center of the Blue House’s campaign to help Song, a longtime friend of Moon, win the Ulsan race. Im is suspected of trying to persuade a rival of Song to drop out of the primary of the ruling Democratic Party (DP) for its mayoral nomination.

Im appeared at the prosecution with a defense team. Cho Min-haeng, a lawyer who worked as legal adviser for Moon’s presidential campaigns since 2012, is representing Im.

Cho, who passed the bar exam in 2004, joined the DP in 2012 to start a political career. He, however, lost a primary for a legislative election later that year.

“Taking into account the nomination system of the DP, it is impossible for the presidential chief of staff to unilaterally support someone to arrange a victory,” one of Im’s aides told the JoongAng Ilbo. “Im will explain this in detail to the prosecution.”

The Blue House remained tight-lipped Thursday about the investigation, although several former presidential aides were indicted on Wednesday.

“President Moon must give an answer to the people,” Hwang said Thursday. “Are you the mastermind of all of these criminal activities? Or was it organized crimes by your aides, who even deceived you?

“Moon’s former chief of staff is being summoned,” Hwang continued. “It is a de facto probe into the president. And the Blue House will try to stop it again.”