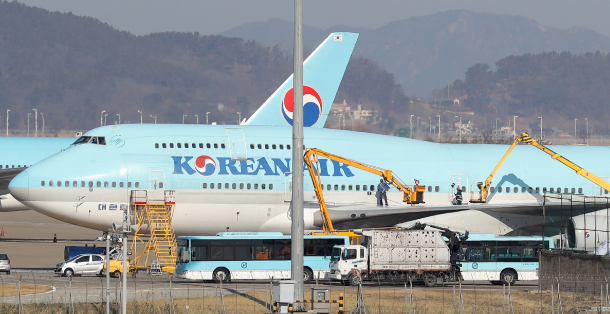 At a mooring in Incheon International Airport on Thursday, workers clean a Korean Air airplane which appears to be the chartered flight that will airlift Koreans from Wuhan, China. [YONHAP]

Korea faced delays in its plans Thursday to evacuate hundreds of its nationals on chartered flights out of Wuhan in China’s Hubei Province, the epicenter of the deadly coronavirus outbreak.

After negotiations with Chinese authorities throughout the day, the Korean Ministry of Foreign Affairs confirmed Thursday afternoon that one chartered plane was set to fly into Wuhan later that night.

The Korean government on Tuesday decided to airlift 700 Korean nationals wishing to leave Wuhan, which is currently under lockdown, on four chartered flights over Thursday and Friday. It initially planned on sending two Korean Air planes to Wuhan at 10 a.m. and 12 p.m. Thursday to evacuate around half these people and bring back the remaining Koreans the following day.

The two chartered planes had also been expected to deliver medical supplies for China such as face masks and protective gear.

But Chinese authorities informed Korea late Wednesday that it would only permit the operation of one plane, setting back Seoul’s initial plans.

Korean Foreign Minister Kang Kyung-wha in a joint press briefing with Health Minister Park Neung-hoo at the government complex in central Seoul Thursday noon, said “China informed us last night that it planned to permit the operation of one plane first.”

She added that consultations with Chinese authorities are continuing to enable permission for flights.

On Tuesday evening, Kang and Chinese Foreign Minister Wang Yi had a phone conversation and discussed the protection of Koreans in China against the coronavirus and ways to extend assistance to China including providing necessary supplies.

Kang said that in her conversation with Wang she requested China’s cooperation in enabling the operation of chartered flights to help Koreans return.

Thus, the Korean evacuees in Wuhan were expected to return to Gimpo airport early Friday.

There are over 7,700 confirmed coronavirus cases globally, according to the World Health Organization and Chinese health authorities, and the virus has caused at least 170 deaths in China.

Amid the spread of the new coronavirus to at least 16 countries, many other governments have been working on arranging ways to evacuate their nationals.

Japan evacuated over 200 of its citizens from Wuhan on a chartered flight Wednesday and plans to send additional flights. Likewise, some 200 Americans, including U.S. State Department personnel, have also been evacuated, arriving at a military base in California Wednesday.

However, Britain also planned to evacuate around 200 citizens Thursday but faced delays because of trouble receiving permission from Chinese authorities, according to the British Foreign Office.

BBC reported that Chinese passport holders are not being allowed to leave, quoting evacuees who have been forced to split from family members.

The Koreans preapproved to leave had been on standby for hours waiting to fly out of Wuhan, where public transportation and flights have been suspended since last week to contain the spread of the virus. They had received notice from the Korean consulate general in Wuhan about the change in flight schedule and being told to wait for further instructions. They had been initially told to get to the airport around five hours ahead of the initial flight schedule.

But even back home, they are not set for a friendly welcome.

The nationals returning from Wuhan, already prescreened and determined to be virus free, will be monitored by medical staff for symptoms before departure and will undergo a 14-day incubation period in isolation upon arrival at two public facilities designated by the government.

Lee Si-jong, governor of North Chungcheong, met with some residents amid continuing rallies from the previous day to seek their understanding on the process of evacuating the Koreans in Wuhan.

Residents of Asan even threw eggs at visiting officials including the Minister of the Interior and Safety Chin Young and the South Chungcheong governor in sign of their protest.

President Moon Jae-in Thursday morning presided over a meeting with the prime minister, related ministers, mayors and governors urging all necessary measures to contain the coronavirus.

The Korean government later announced that it will provide $5 million in emergency humanitarian assistance to China to help combat the spread of the coronavirus.