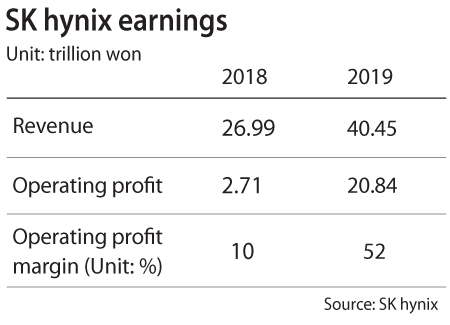 Operating profit plunged 87 percent to 2.71 trillion won ($2.27 billion) in 2019 compared to a year earlier, according to the chipmaker on Friday. That was the lowest since 2012, when SK Group acquired the chipmaker.

The supplier to Apple and Huawei cited unfavorable market conditions.

“Amid increasing global economic uncertainty, the increase in inventories and conservative purchasing policies on the side of the customers led to a slowdown in demand as well as price declines,” SK hynix said in a statement.

The company noted some improvements in the market while striking a cautious note in terms of investment.

“While SK hynix sees the recent improvement in demand flows positively, the company will carry out more prudent production and investment strategies, as complexities and uncertainties still remain much higher than in the past,” it said.

A company official also mentioned reduced inventories by the end of last year - of its own and its customers - during a conference call.

“Inventories of dynamic random access memory [DRAM] were reduced to less than 4 trillion won by the end of last year from around 5 trillion won in the third quarter,” the official said.

“Inventories of NAND Flash memory chips have been cut to less than 5 trillion won.”

As for the risks associated with the Wuhan coronavirus, the official said that the impact will be limited.

“There has been no major problem so far in terms of factory operations in production lines based in China,” the presenter said.

“But if the Lunar New Year holiday is extended beyond Feb. 9, we can’t rule out the possibility of an impact on our business.”