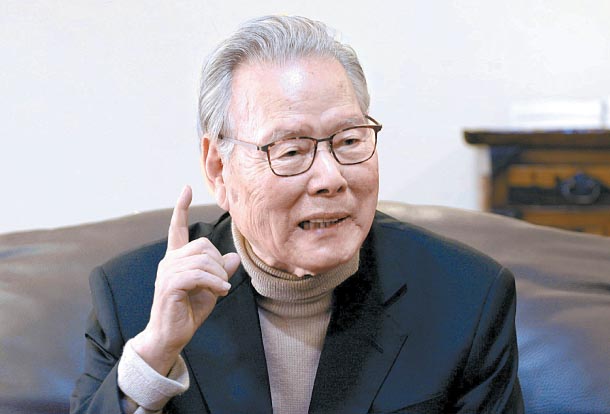 Lee O-young, 86, a former Korean culture minister, has a lot to say to the youth.

Lee has kept a close eye on the future of Korean society through publishing nearly 160 books including “Smaller Is Better: Japan’s Mastery of the Miniature,” “Digilog” and “The Vita Capitalism.” JTBC aired a documentary focused on Lee’s life story last week which Lee said focuses on his message to young people living in today’s modern society.

“We should not force the youth to have dreams, their dreams won’t come true unless society acts with them,” said Lee.

JTBC recently sat down with Lee at the Young-In Literary Museum in Jongno District, central Seoul.

Q. You chose writing over receiving chemotherapy treatment when you were diagnosed with stage-four lung cancer. How did you feel at the time?

A. As soon as I was diagnosed with cancer, one thing that crossed my mind was “I still have lots of things to write, I want to write until I die.” I’m happy that I can write until the very moment of death. I don’t want to spend my last moments of life in a hospital. I will die at home with people I know. That is my last hope.

Can you tell us more about the book that you are currently writing?

Ironically, I’m writing a book about birth and life. It’s a story about humans, Koreans, and how I was born. Life is a long journey from womb to tomb. My mother had an ocean in her stomach, and I was one of the fish in there. There is 3.6 billion-year history of life on the planet. So, I’m 3.6 billion and 86 years old.

In your book “From intellect to spirituality,” which was published in 2017, the message was Memento Mori [remember that you have to die]. Can you talk more about this?

There are two types of people in Memento Mori. Drinkers enjoy their lives drinking and eating all they want because they know that they are going to die. In contrast to them, Christians try to lead good lives as they must die at the end. When I was 6, I felt death for the first time in my life. I was rolling a hoop on a sunny day. All of a sudden, I was frightened and felt anxious about the fact that all people have to die at some point. The idea of the opening ceremony of the 1988 Seoul Olympics, in which a boy led a parade rolling a hoop, came from this experience. [I wanted to show that] death is in the middle of an opening ceremony of a festival, which also means a birth. Irrationally, life’s birth and death co-exist with their backs to one another. I have been agonizing over this all my life.

How was your childhood?

My mother always read books. When I was baby, she held me in her arms and read books. While I was sick in the bed, she stayed by my side and read books. Her favorite books were literary classics such as “The Pilgrim’s Progress” and “Les Misérables.” When I was very young, I thought that people always have to read and write. As soon as I turned 4, I started to write poems in the margin of books that my older sisters finished reading.

You studied Korean language and literature at Seoul National University. What did your parents think about this?

At the time, all smart students obeyed their parents and decided to go to either medical school or law school. However, I think one thing that helped me overcome many desperate times, including the 1950-53 Korean War, was literature. A light that saved me from a dark tunnel of my youth was poetry. If I went to medical school or law school for university, I would not have been able to write until this age. I just love studying humanities.

Many people consider you as a cultural icon who worked in diverse fields. What do you think about that?

I’ve done all kinds of jobs including a professor, journalist, essayist and columnist. Also, I tried writing everything such as poems and plays. Instead of being tied into a frame, I spent my whole life trying to dig deeper into diverse fields. I dug deeper into poems and criticism as well. Although it was not of my own will, I also used to serve as the culture minister of Korea.

You predicted an era of artificial intelligence [AI] and introduced the so-called Digilog concept, a portmanteau for digital and analog, in your book “Digilog” which was published in 2006. Can you talk more about that?

I have argued consistently for the last 10 years that our world can finally be an information society as soon as Digilog becomes reality. When Amazon, the largest e-commerce site in the world, opened brick-and-mortar stores, they achieved a merger between the two. Also, information of streets that had been digitalized by Google Earth becomes a GPS for self-driving cars. These are examples of Digilog. The reason why I have been emphasizing Digilog for a long time is because I thought that Korea could take the lead in information society even though we were late in industrialization.

It is very unfortunate for Korea. If Koreans would have noticed it earlier, AlphaGo [Google’s AI program famous for defeating Lee Se-dol, a master in the traditional Korean board game baduk, also known as Go, in 2016] could’ve be invented in Korea. If humans want to win a race against horses, we should get onto them. We will be kicked by their legs and killed if we only follow behind them. This is the same for AI. We should get into AI and combine what machines can do with what they can’t do. Although AlphaGo is an artificially intelligent system, it was once defeated by Lee Se-dol. Don’t be afraid of AI. If you get into AI, you can gain incredible power. From now on, people who accept AI will be global leaders.

If there’s anything you want to say to youths in Korea, what would it be?

Unlike the older generation, the modern society that youths are living in is essentially a war without guns. We should not force youths to have dreams. Their dreams won’t come true unless society acts with them. If only one person has a dream, it is nothing more than a dream. However, if others who have the same dream hold hands together, their dreams will finally come true.

I want to emphasize the concept of Memento Mori. Nothing is more desperate and important than death. Youths will be able to fully understand what life is only when they realize the value of death. Only people who have suffered from thirst in the desert are able to understand the taste of water and life. Youths must think of death more seriously because they are young. That is the quickest way to recognize life and the best way to design their future.