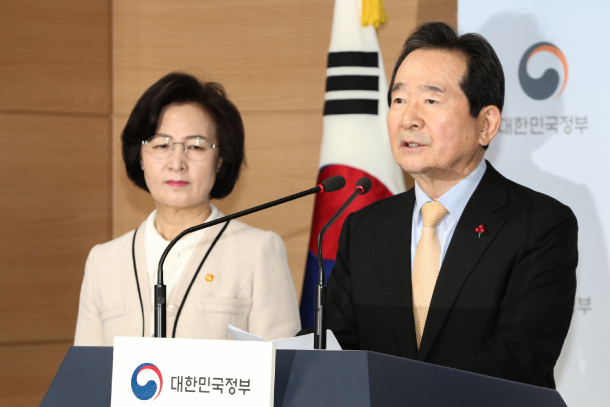 The Moon Jae-in administration announced Friday its roadmap to complete the reform of the prosecution, including preparation plans to launch a new investigative agency for senior public servants in July.

Before the announcement, the three cabinet members briefed Moon at the Blue House about the measures. “The prosecution in the past failed to correct its wrongdoings on its own, so it is especially meaningful to establish the new agency,” Moon was quoted as saying by Choo.

“There should be no sanctuary privilege from investigations and indictments, and law enforcement bodies of the country must be set right. Reform of the prosecution is the most important.”

At the media briefing, Chung said a preparation team will be created to support the creation of a new investigation agency in July. “The agency will be an independent body, and it will conduct investigations without any exceptions.”

Chung also said a preparation team will be created in the government to follow up with the redistribution of investigative powers between the prosecution and police. The team will make necessary changes in the regulations and ordinances that are directly concerning the lives of the people.

On Dec. 30, 2019, the ruling Democratic Party (DP) and its legislative allies railroaded the bill to create a new investigation agency for senior public servants. The new agency is the first organization allowed to take over some of the prosecution’s indictment powers. It will investigate crimes allegedly committed by top officials in the administration and judiciary ranging from the president to judges, prosecutors and lawmakers.

On Jan. 13, the National Assembly also approved a package of bills to redistribute investigative authority between the prosecution and police, further whittling away power from state prosecutors.

During the cabinet meeting on Jan. 21, Moon asked Chung to personally assume the responsibility to complete the reform. “The devil is in the detail,” Moon told Chung, asking him to pay attention to complete specific follow-up measures.

After Chung announced the roadmap, Choo addressed reporters in a briefing and further attacked the prosecution. “During the authoritarian governments, prosecutors enjoyed concentrated powers, amounting to prosecution-led fascism,” Choo said. “They, therefore, violated human rights and formed a cozy relationship with the administration, fueling the people’s concerns.”

Chung also talked about the need to reform the police. “In order to prevent the police from unreasonable power or abusing its newly expanded authority, we will operate the state police and local autonomous police separately,” Chung said. “We will also offer systemic support to improve the police’s investigative abilities by creating a national investigation headquarters.”

No bills to change the police, however, have been passed so far. “We will do our best to pass the measures before the end of the 20th National Assembly,” Chung said.

The 20th National Assembly has about four months left in its tenure. The ruling party plans to pass the bills next month.

Interior and Safety Minister Chin, responsible for supervising the police, said the government originally planned to operate pilot programs of regional autonomous police at five areas including Seoul, but more will be added soon as more local governments expressed their desire to participate.