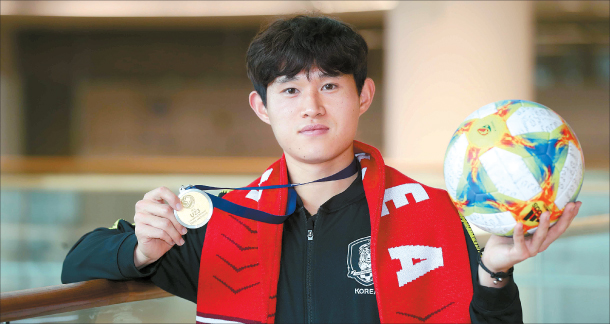 After a successful performance at the AFC U-23 Football Championship, Lee Dong-gyeong now hopes to get added back to the roster for the 2020 Tokyo Olympics. [KIM SANG-SEON]

Looking at head coach Kim Hak-bum’s roster at the recent Asian Football Confederation (AFC) U-23 Football Championship, there wasn’t a specific player that stood out. That’s because Kim has put an emphasis on teamwork.

While every player had their own successes, Lee Dong-gyeong did manage to make sure the fans remembered his name, for his roles in helping the young Taeguk Warriors win their first-ever AFC U-23 Football Championship title.
Throughout six matches, Lee scored two goals and added an assist.

Though Lee had a successful finish, his start to the tournament was not as strong. Lee wore the number 10 jersey, which is normally reserved for the team’s starting player. But his name was very unfamiliar to many until Korea’s quarterfinal match against Jordan. When the two teams were tied at 1-1, Lee scored a thrilling goal in the 95th minute, right before the final whistle. After netting the winning goal, he was caught on camera crying.

“Since our team would have gone into overtime if I didn’t score, I made my kick with confidence,” Lee said. “I prepared for the tournament with confidence, but since it didn’t really work out as I wanted it to in the beginning, I couldn’t really help the team much. I should have met the expectations to prove why I was wearing the number 10 jersey, but instead I felt pressure mentally. So I got emotional.”

The confidence boost was exactly what Lee needed. Following the quarterfinal match against Jordan, Lee once again left an impression, by assisting Jeong Tae-uk’s header in the 113th minute during the final match against Saudi Arabia. His goal not only sealed the victory for Team Korea, it also meant the AFC title was theirs too.

“Originally, head coach Kim Hak-bum told Kim Dae-won [of Daegu FC] to take the kick,” Lee said. “But I asked if I could do it, and he gave me the permission. Since I’d practiced that set play with Tae-uk, I was confident. Our head coach is always passionate, and since he doesn’t like losing, he prepares [for each match] thoroughly. During the meeting, he told us that we’re definitely going to win so he asked us to trust him and follow.”

His performance on the pitch wasn’t the only thing that brought attention to his name. In Korean, “Dong-gyeong” also means “Tokyo.” As the team was also competing for a spot at the 2020 Tokyo Olympics and because the AFC U-23 Football Championship acts as the Asian qualifier, when Lee scored, fans quickly game him the nickname, “Tokyo Lee.”

It was his grandmother who chose his name. When baby Lee was born, his grandma went to a fortune teller who also gave out suggestions for names. At the time, his grandma heard that it would be good for baby Lee to be named after a city or country.
“I think my grandma gave me a great name,” Lee said.

His name may be an unfamiliar to those who don’t follow football closely, but he’s been Korea’s young hopeful in the sport for a while now, as he was selected for the senior national football team twice last year.

His time on the senior team also meant that he got to take a closer look at Lee Jae-sung of Holstein Kiel and Kwon Chang-hoon of SC Freiburg, who are both left-footed strikers like Lee. Aside from the Korean national football team, Lee said he likes Mesut Özil of Arsenal FC.

“By training with the veteran players on the A team [the senior national football team], I learned responsibility and much more,” Lee said.

Now that he’s successfully made a name for himself, Lee has set his sights on getting selected for Kim’s team once again, this time for the 2020 Tokyo Olympics. However, the competition is expected to be much tougher than the AFC tournament as the roster is limited to only 18 players, while the AFC allowed 23.

Not only that, Lee is also up against Europe-based players like Lee Kang-in of Valencia CF, who has been tapped to join the roster for the Olympics.

“For a good result, [Kim will] pick the best players,” Lee said. “I’ll strengthen my weakness and prepare well. I saw Kang-in back when I was with the senior national football team. He is younger [then me], but he surprised me and there was a lot to learn from him. I’ll prepare [for the Games] in anyway to be able to help the team.”

Also, in the men’s Olympic football tournament, each team is allowed three wild cards, where the head coaches are allowed to add three players of any age. Using this strategy, Kim saw success at the 2018 Asian Games when they won gold.

“Competing at the Olympics has been my dream stage and not just because this year’s Games will take place in Tokyo, like my name,” Lee said. “It is a tournament everyone is excited about.”

“Even back when I was cheering [for Korea] for the 2012 and the 2016 [Summer Games], [competing at the] Olympics was my dream. During the Rio Olympics, I really enjoyed watching women’s volleyball games and cheered for them. If I can go to Tokyo, I hope both teams can play well.”