Exports decline in January for 14th month but pace slows

Exports decline in January for 14th month but pace slows 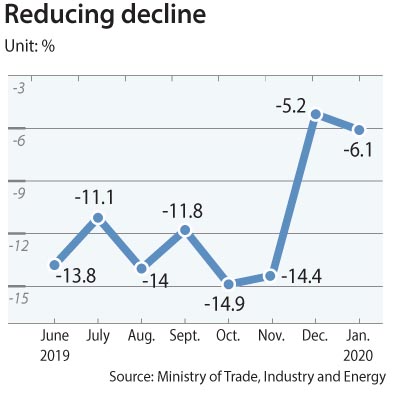 Korea’s exports continued to decline in January for the 14th consecutive month.

The spread of the Wuhan coronavirus could make things worse.

According to the Ministry of Trade, Industry and Energy on Saturday, exports in January shrunk 6.1 percent compared to a year earlier to $43.4 billion.

Exports have been falling since December 2018.

Exports faced major challenges in January, including tensions between the United States and Iran and the shorter working days as a result of the Lunar New Year holidays.

But even faced with further challenges like the virus outbreak, some signs of improvement were seen.

Exports last month dropped at a single-digit rate for the second month in a row.

Declines had been in the double-digits between June and November.

The government expressed confidence in its own efforts to start a recovery.

“We will definitely achieve export recovery through full support including support of export routes such as marketing and offering 240.5 trillion won [$201 billion] in export finance,” Finance Minister Hong Nam-ki said on Jan. 20.

The government stripped out holidays and looked at average daily exports for the month, which were $2 billion, the largest amount since November’s $1.87 billion and greater than last year’s daily average of $1.99 billion.

Exports of semiconductors, Korea’s largest export item, declined at the slowest pace in 14 months, 3.4 percent, compared to a 17.7 percent drop in December and a 30 percent fall in November.

Imports in January shrunk 5.3 percent to $42.7 billion. As a result the trade surplus last month was $620 million, a 40 percent decline from a year earlier.

“Japan’s export controls and the new coronavirus influence on our exports until now seem limited,” said a ministry official.

The ministry emphasized that Korea’s exports to Hubei Province in China, the epicenter of the outbreak, account for only 0.3 percent of the country’s total exports.

Yet the Wuhan coronavirus will be the biggest risk factor for the coming month.

“Our exports since October have maintained an improved momentum especially with the daily average increasing for the first time in 14 months,” Minster of Trade, Industry and Energy Sung Yun-mo said. “The government expects exports to increase in February if the current momentum continues. However, we expect difficulty in exports with China due to the spread of the coronavirus.”

The minister noted the importance of the China market.

According to the Trade Ministry, China’s economy accounted for 4.3 percent of the global economy in 2003 at the time of SARS. In 2018, it accounted for 15.9 percent.

China’s purchases of electronics and telecommunication equipment accounted for 31.6 percent of the global export market in 2018. In 2003, that figure was 12.3 percent.

“The government has activated a team that would minimize the impact of the new virus on our economy while getting daily briefings on [Korean] companies in China as well the export situation,” Sung said.

The minister said he will be hosting an export situation meeting later today.