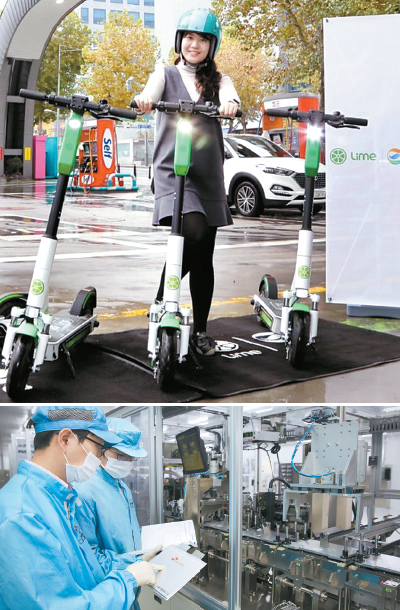 Top: A GS Caltex employee poses with a Lime electric scooter at the company’s gas station in Samseong-dong, southern Seoul. Above: SK Innovation workers at its electric battery production plant. The battery manufacturer plans to maintain its production at 100 percent of capacity, and optimize its production structure by increasing the facility in proportion to new orders placed. [GS CALTEX, SK INNOVATION]

As global investment in green technology promises to reduce demand for petroleum products, four local oil companies - SK Innovation, S-Oil, GS Caltex and Hyundai Oil Bank - are refining their exit strategies in the midst of a long-term decline in demand for oil.

Experts predict the consumption of crude oil to decline by 2038. The global transition to green energy is accelerating alongside a rapid increase in demand for electric vehicles (EVs). The profits returned to oil refineries are decreasing overall as refining margins, which take up a large portion of the industry’s revenue, decreases each year.

With obstacles ahead, the resistant petroleum industry is starting to embrace change.

And some are turning their eyes away from oil to electric mobility.

Market leader SK Innovation is betting big on EV batteries. The company plans to grow its EV battery sector to make up for its declining refining business. SK is building factories in Europe, China and the birthplace of electric vehicles, the United States. The company spent nearly 5 trillion won ($4.2 billion) to build the plants.

Construction is still in its early stages, but SK Innovation’s CEO already has a new investment plan in mind.

Kim Joon, CEO of SK Innovation, said earlier this month at the Consumer Electronics Show (CES) in Las Vegas that the company plans to expand the production capacity of its U.S. factory. If SK Innovation starts to expand its battery plant in the United States, analysts expect the investment to exceed 1 trillion won.

GS Caltex plans to go beyond oil and into micro mobility. The company sealed a partnership deal last November with Lime, a global leader in the electric scooter sharing industry. GS Caltex will provide charging services for electric scooters at its branded gas stations.

The partnership is part of a bigger vision of GS Caltex for future of mobility.

“We want people to drive to a nearby gas station with an electric scooter, transfer into a shared car parked there, and use it to drive to their destination” a GS Caltex official said Thursday.

Others are opting to make the most out of what they do best, using their existing expertise and infrastructure to focus on a broader range of petrochemical products.

S-Oil plans to transform into a chemicals-and-energy company by expanding the range of materials produced.

With the help of Aramco, a Saudi Arabian oil producer, S-Oil used technology provided by its mother company to upgrade low-cost refinery residuals to value-added petrochemical products, including polypropylene and oxidized propylene. The two materials are key ingredients to produce plastic.

The Ulsan factory’s annual production volume was 405,000 tons for polypropylene and 300,000 tons for oxidized propylene.

“The chemical business is beneficial for oil refineries [like us], because we can procure raw materials like naphtha at a much cheaper price,” said an official from S-Oil.

Naphtha is a raw material produced from refined crude oil and is used to make plastic.

GS Caltex is also making its way into the chemicals business. It invested 2.7 billion won to build an olefin production plant in Yeosu, South Jeolla. GS aims to begin commercial operation by next year. Olefin is a chemical compound used to make plastic.

And Hyundai Oil is already working to penetrate the low-sulfur ship fuel market, doubling production in the last three months from 100,000 tons in November 2019 to 200,000 tons in January.

While the market is rather new, low-sulfur fuel is flying off the shelves in the wake of a recent decision from the International Maritime Organization to ban ships from using fuels with sulfur content above 0.5 percent.

“Even though we produce more low-sulfur fuel every month [due to high demand], it’s always sold out,” said an official from Hyundai Oil Bank.

In addition, Hyundai Oil Bank will finalize their takeover of 324 SK-branded gas stations by the second half of this year.

Last November, Hyundai’s affiliate was identified, with the investment fund Koramco, as the preferred bidder for the acquisition deal of gas stations directly managed by SK Networks.

Once the deal is finalized, Hyundai will own 2,542 gas stations across the country, placing Hyundai in second place after SK Energy, which owns 3,404.