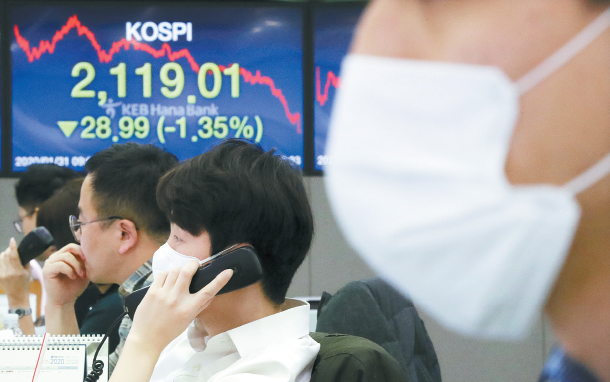 A signboard inside a dealing room of KEB Hana Bank in central Seoul on Friday shows the benchmark Kospi falling 1.35 percent, or 28.99 points, to close at 2,119.01. The index dropped around 5.66 percent throughout last week as investors took a risk-off approach from the spreading Wuhan coronavirus. [YONHAP]

With the Wuhan virus still spreading and the Chinese economy buckling, Korean companies are facing a crisis of their own. Given the importance of Chinese manufacturing and the interdependence of the supply chain, their ability to function efficiently could very well be compromised.

Some companies in Korea are even considering the closing of factories at home for lack of parts, while other are contemplating a shift in production schedules as inventories dwindle.

China is the largest manufacturing country in the world, making one-sixth of all products sold worldwide, and with its large population, it is one of the most important export markets for Korean companies in a wide variety of industries.

The spreading novel virus is considered an especially serious threat to the local semiconductor industry, especially for Samsung Electronics and SK hynix.

According to market tracker IBS, China is the largest semiconductor market in the world, with a 53 percent share. 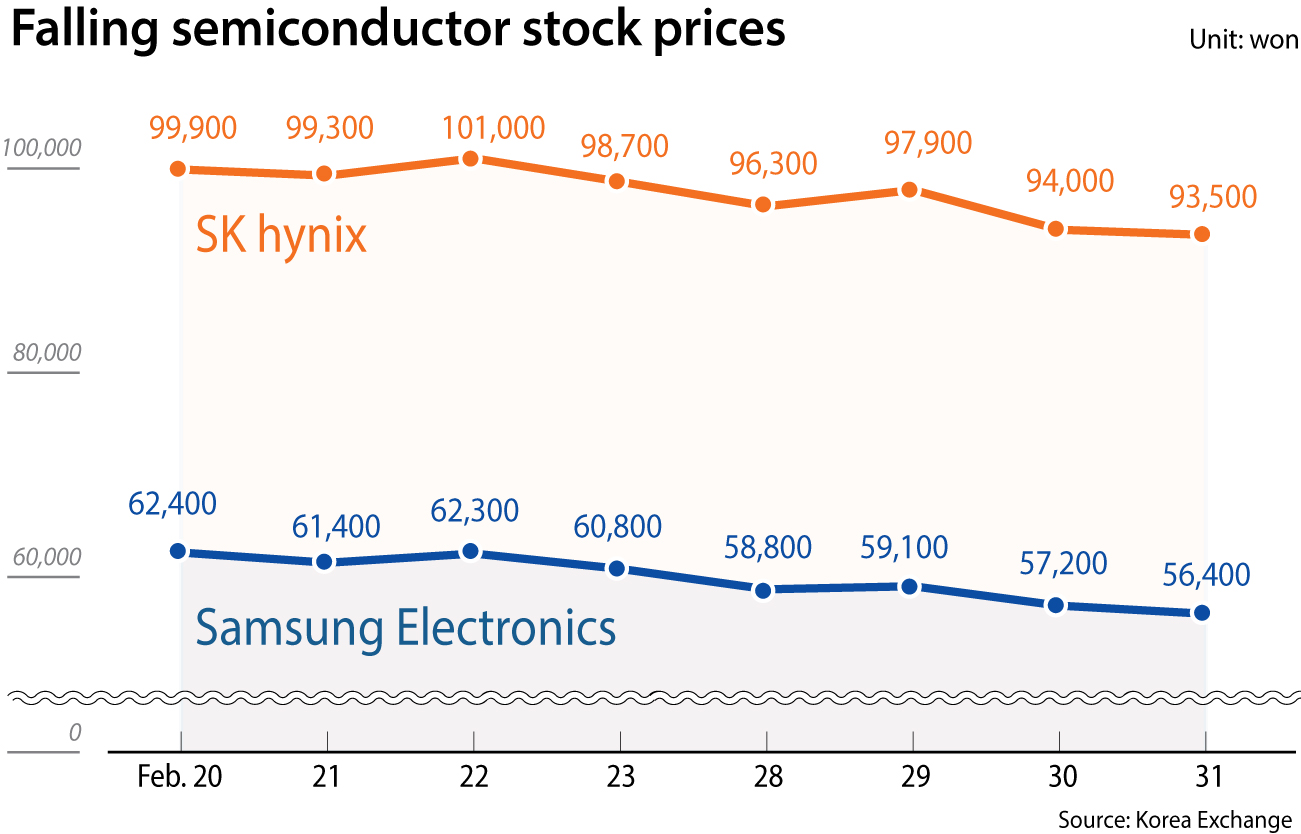 For the local semiconductor industry, which is just coming back and is starting to see some positive numbers after a year of sluggish growth, the coronavirus outbreak is seen as another major roadblock for this year’s growth.

It got hit by the trade war last year. This year, it’s the virus.

Due to the spreading virus, local governments of Shanghai and Suzhou, where many information technology and manufacturing companies have production facilities, ordered companies in the area to shut down facilities though Feb. 9.

If factories can’t continue running as expected, the demand for semiconductors is also inevitably going to shrink. The virus outbreak is also going to hit Chinese consumer demand for technology devices like smartphones. That could in turn lead to a drop in the prices of semiconductors.

“For the semiconductor industry, most factories are automated, so there won’t be big damage immediately, but if the situation doesn’t recover, production facilities could come to a stop from problems with raw material supplies,” said Lee Jae-yoon, an analyst at Yuanta Securities, in a report Friday.

He added that the semiconductor sector could be affected if Samsung Electronics and SK hynix experience problems supplying products to their major customers.

China is also a major market for both companies. The country accounted for 24 percent of sales for Samsung Electronics and 48 percent for SK hynix between January and October last year.

It’s a two way street, and the bottlenecks could form in both directions.

Stocks are being hit.

Korea’s stock market was closed Monday due to the Lunar New Year holidays.

The Wuhan coronavirus isn’t just causing disruption to the semiconductor industry. If the outbreak continues, the global economy could experience significant disruptions in the supply chain. Assembly lines could stop, deliveries would be delayed and demand for a range of products could falter.

Global financial authorities are keeping a close eye on the virus outbreak and gauging its potential effects on the world economy.

“The coronavirus outbreak is a very serious issue,” said U.S. Federal Reserve System Chair Jerome Powell in a press conference Wednesday. “There will clearly be implications at least in the near term for Chinese output.”

IMF spokesperson Gerry Rice said in a news briefing Thursday that although it is too soon to quantify the outbreak’s potential economic impact, the situation is having a direct impact on consumer and business demand in some Chinese cities.

The local automobile industry is another potential victim of the outbreak, as some companies have been producing cars from auto parts sourced from Chinese factories.

SsangYong Motor said Friday that it may close its factory in Pyeongtaek, Gyeonggi, from Feb. 4 to Feb. 12, as it experiences problems securing wiring harness supplies from an auto parts manufacturing plant in Yantai, China.

The Yantai factory was originally ordered to halt production until Sunday, as the Chinese government extended the Lunar New Year holiday season. But the holiday just got longer, as the Yantai city government ordered the production break to Feb. 9.

SsangYong Motor’s management was scheduled to meet with the union Friday afternoon to reach a decision on possible factory closure.

“The assembly line and production process can’t be done if any of the 30,000 parts needed for a single car is missing,” a SsangYong Motor spokesperson said.

Problems seen at the Yantai factory are also causing issues at Hyundai Motor, GM Korea and Renault Samsung Motors, which is also getting wiring harnesses from the facility.

The problem is less severe than for SsangYong Motor, as the largest automaker by sales in Korea has been receiving the part from multiple sources.

But it is still expected to face a slowdown of supply, which is going to affect Hyundai Motor’s production of the Palisade large-size SUV, which has been in high demand in Korea and North America.

Hyundai Motor canceled plans for a weekend work shift for Palisade production at its Ulsan factory to analyze how much capacity the factory should run in facing the coronavirus outbreak.

It is reviewing its supply chain for wiring harnesses from its sources, as the remaining inventory for the auto part is expected to be depleted by early this month.

“Other auto parts sourced from China could also undergo supply issues, so we are under careful review,” a Hyundai Motor spokesperson said.

GM Korea and Renault Samsung Motors said the situation is not so severe as to warrant a discontinuation of vehicle production but added they are preparing for worse.

As supply delays are becoming more apparent, new car deliveries to customers are also expected to be postponed.

Popular models like Hyundai Motor’s Palisade SUV and the Grandeur sedan could deliver later to customers than promised.

Hyundai Motor added that it is implementing flexible work hours and temporary closures for its Chinese subsidiary as ordered by the Chinese central and local governments.

Beijing Hyundai, a joint venture between BAIC Motor and Hyundai Motor, is closing its factory in Chongqing and Sichuan until Feb. 9. The subsidiary’s factories in Beijing and Changzhou are offering flexible work options starting Monday.