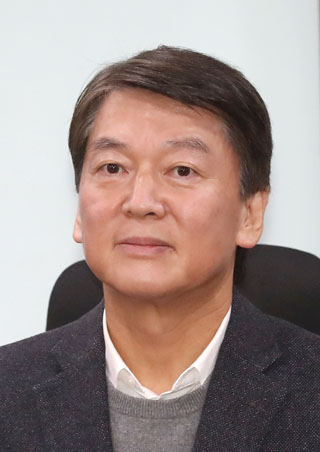 Ahn Cheol-soo, a two-time presidential candidate, announced Sunday the creation of a new political party that would be “small, sharing and innovative.”

Ahn held a press conference Sunday at the National Assembly in Yeouido, western Seoul, to announce his new party’s vision. He said he wanted to create a party that was “pragmatic and moderate,” free from the ideological and regional straightjackets of Korean politics.

“The party I am trying to create is not going to be just another party like the other political parties,” said Ahn, just two weeks after returning to the political scene.

“With the sense of a calling that Korea cannot remain this way, I want to create a political party completely different from others.”

He added, “Through this party, I want to overcome politics centered on ideologies and [regional] blocs and rescue us from irresponsible politics.”

Ahn, a former chairman of the minor opposition Bareunmirae Party (BP), announced last Wednesday he was defecting from the party he co-founded, which is currently headed by Sohn Hak-kyu. The two have collided over reform measures.

This is the doctor-turned-software-mogul-turned-politician’s fourth shot at forming a political party.

Ahn in 2014 merged his political faction with the liberal Democratic Party to form the New Politics Alliance for Democracy, which he co-chaired briefly.

He defected from the party in December 2015 and went onto found the People’s Party in February 2016 ahead of the 2017 presidential election that resulted in the victory of Moon Jae-in.

The party merged with the Bareun Party in 2018 to create the centrist Bareunmirae Party. Yoo Seong-min, a BP co-founder, also defected from the party early last month and created the New Conservative Party.

Ahn ran for Seoul mayor in June 2018 but finished third behind incumbent Mayor Park Won-soon and Kim Moon-soo of the Liberty Korea Party.

Retiring from politics in late 2018 to “reflect and learn,” Ahn studied in Germany, after which he traveled to the United States for a visiting scholarship at Stanford University.

He returned to Korea on Jan. 19. Ahn said he will not run in the April 15 general elections.

During the Sunday press conference, Ahn said he believed it is “impossible to find a new path with the existing old political parties,” adding “there is no time.”

He said, “I believe establishing a party from the very beginning can enable it to be much more upright and properly done and is the way to properly change politics.”

Ahn envisioned a “small and capable” party and said he would consult with experts to create policies based on “networking.”

He said he will make a “sharing” party in which members participate in the party’s decision-making process.

He cited the Estonian administrative system as a benchmark while stressing his party hopes to adopt blockchain technology to achieve financial transparency.

Ahn also said that rather than participating in massive rallies, he wants to create a political party “that can work faithfully within the National Assembly to diligently fight inside the Parliament.”

He said he could announce the members of the preparatory committee to create the party as early as Monday.

Ahn’s mentors present at the press conference included Han Sang-jin, a professor emeritus of sociology at Seoul National University, and a group of Bareunmirae lawmakers known to be Ahn supporters including Kim Su-min, Kwon Eun-hee and Lee Tae-kyu.