Buses carrying Koreans airlifted from the coronavirus-hit Chinese city of Wuhan head for the Police Human Resources Development Institute in Asan, South Chungcheong, on Saturday. The evacuees will be quarantined for two weeks in the temporary shelter. [KIM SEONG-TAE]

Four new people in Korea were confirmed to have been infected by the coronavirus over the weekend, bringing the total number of diagnosed cases to 15.

Local health officials confirmed one case on Saturday and three on Sunday, labeling them Patients No. 12, 13, 14 and 15 in the order they were diagnosed.

Korea has announced at least one additional case everyday since last Thursday, raising fears that the toll will keep rising. Korea confirmed its first patient on Jan. 20. But the spread seems slow, and none of the patients appears to be in critical condition.

Patient No. 12, who was diagnosed Saturday, has been identified as a 48-year-old Chinese national who lived in Bucheon, Gyeonggi, and worked as a travel guide for Chinese tourists. He did not recently visit the Chinese city of Wuhan in Hubei Province, the epicenter of the coronavirus, and appeared to have contracted the virus while in Japan last month as a tour guide for Chinese visitors.

It’s the first time that a person in Korea contracted the virus in a foreign country other than China. He appears to have contracted the disease from a Japanese person, according to Korea Centers for Disease Control and Prevention (KCDC) officials.

Patient No. 12 returned to Korea on Jan. 19 through Gimpo International Airport in Gangseo District, western Seoul, but showed no signs of the disease at the airport.

Over the past few days, however, he felt muscle aches and visited one clinic in Bucheon on Jan. 23 and another in Gunpo, Gyeonggi, on Jan. 25. Korean health officials quoted him as saying he didn’t think he could’ve been infected by the virus because he hadn’t visited Wuhan. 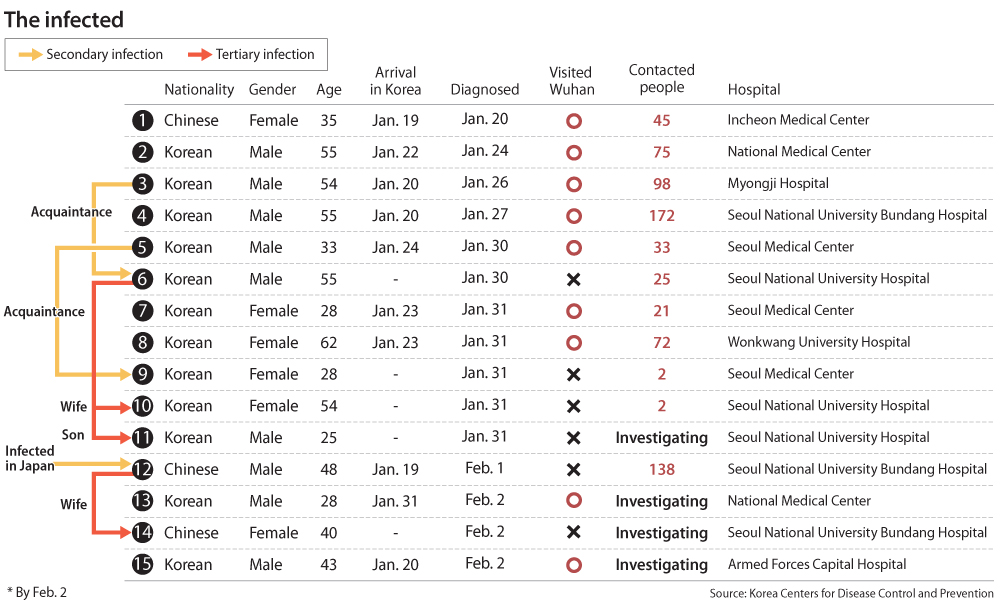 It was only when his symptoms grew worse and he visited a larger hospital in Bucheon on Thursday that he realized his case might be serious. Test results were positive two days later.

Before that, he roamed around Bucheon, Seoul and Gangneung, Gangwon, on subways, taxis, buses and KTX bullet trains. He watched two movies at the CGV theater near Bucheon Station, dined in restaurants and coffee shops and came in the physical proximity of at least 138 people - just second to Korea’s fourth patient, who went near 172 people before he was diagnosed.

Whereas Patient No. 4 doesn’t seem to have transmitted the virus to anyone, Patient No. 12 is believed to have infected his wife, Patient No. 14. Patient No. 14, who is 40 years old and also a Chinese national, was among the three latest patients in Korea confirmed Sunday.

Patient No. 12 and 14 have one young daughter, but health officials said she showed no signs of the virus as of Sunday. The parents are receiving isolated treatment at Seoul National University Bundang Hospital in Seongnam, Gyeonggi, while the child is being quarantined in her home for possible symptoms and cared for by Bucheon officials.

The child attends an elementary school in Bucheon, which is closed for the winter break. The Bucheon city government office said it would postpone the start of the spring semester for all elementary schools in the city.

But KCDC officials also raised the possibility Patient No. 14 might be Korea’s first case of a quaternary infection - which means that the Japanese national who passed on the disease to her husband, Patient No. 12, might have been infected from yet another person. Health authorities said they were investigating the possibility.

It is not known yet how many people Patient No. 14 was within the physical proximity of.

Patient No. 13, whose case was also confirmed Sunday, was among 368 Korean nationals who were airlifted out of Wuhan to Korea last Friday on a chartered flight. The 28-year-old Korean man who used to live in Wuhan tested positive Sunday when local health officials ran a test on all 368 people. The KCDC said the rest tested negative, though some have reported to be experiencing symptoms resembling those of the virus.

The second and last chartered flight from Wuhan brought 333 Korean nationals out of the Chinese city on Saturday morning, and no one from that batch has been confirmed as a virus patient by Sunday.

The returnees are quarantined in two facilities used for training public servants in Asan, South Chungcheong, and Jincheon County, North Chungcheong, where they will stay for 14 days until their incubation period ends.

Patient No. 15 has been described as a 43-year-old Korean national who returned to Korea from Wuhan on Jan. 20 and had been monitored for possible symptoms. The KCDC said he reported a mild fever on Saturday and tested positive Sunday.

Korea’s southern Jeju Island was also on high alert Sunday after local officials announced that a Chinese person who visited the island two weeks ago was confirmed to have contracted the disease last Thursday after she arrived back home in China.

Local health officials don’t know whether the virus is contagious during the incubation period and before symptoms manifest, but Chinese health officials have left that possibility open. Based on this hypothesis, Jeju officials said they were tracking the Chinese visitor’s travel routes in Jeju based on testimony from her daughter, who toured the island with her, as well her credit card transactions.

The daughter has shown no symptoms of the virus so far. Five staff members of a Jeju hotel who came near the infected Chinese patient have also shown no signs, though they’re being quarantined in their homes and being monitored.