Table tennis prodigy Shin Yu-bin is once again making headlines after turning pro at the tender age of 15. 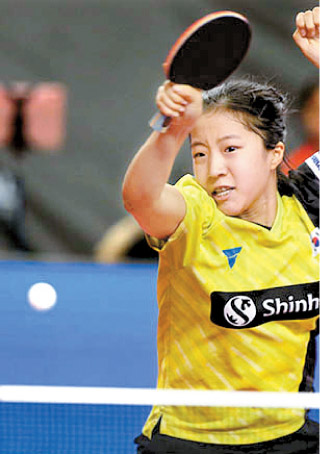 Shin Yu-bin competes at the 2020 ITTF World Team Qualification Tournament for the Tokyo Olympics in Portugal on Jan. 24. [YONHAP]

After quickly becoming a key player on the Korean national women’s team, Shin has decided that she will turn pro after graduating from middle school, rather than continuing to balance her career between school and table tennis.

It has been reported that Shin is currently negotiating her contract with Korean Air’s table tennis team, also known as an elite team for the sport in Korea.

“Regarding the addition of Shin Yu-bin, we’ve finalized the big frame [of the contract],” said an associate from Korean Air. “Once she returns after the [2020 International Table Tennis Federation (ITTF) World Tour Platinum,] German Open, we’ll make an announcement [about her joining the team].”

The 15-year-old has been battling with the decision to turn pro or attend high school since last year, but after taking into account the limitations studying full-time would have on her competition schedule, especially international tournaments, she came to the decision to focus on table tennis.

Another factor that was key in her decision was her inclusion on the national team, and the difficulty she would have finding a training partner that would be at the same level as her on a high school team.

“Studying not only takes away from Yu-bin’s training time but she said it’s really difficult for her to sit at her desk at school,” said Shin’s father. “I wanted her to go to high school, but in the end, I decided to let her do what she wants.”

Shin first found fame back in 2009, when, aged just 5-year-olds, she held own against legends of the sport like Hyun Jung-hwa, who was in her 40s at the time.

Table tennis has been a part of Shin’s life since she was born, as her father used to be a player. Since her father also ran a table tennis venue, she was never far from a game.

By doing so, she became the youngest table tennis player in Korea to join the national team at just 14 years, 11 months and 16 days old.

Table tennis is part of daily conversation in Shin’s household, and she’s also set herself the goal of becoming a better player, by increasing how many hours a day she trains and changing her mindset during matches.

At the beginning of this month, Shin missed her spot onto the national team, after failing to play to her full potential in the qualifying tournament.

However, a recommendation from the Korea Table Tennis Association (KTTA) was enough to secure her a spot. And Shin proved why she earned that recommendation, playing a key role in leading the Korean women’s table tennis team to earn their spot at the 2020 Tokyo Olympics.

At the 2020 ITTF World Team qualification tournament for the Tokyo Games, the 15-year-old played a crucial role in leading the team to win the second stage by defeating France. The women’s team was on the verge of not being able to compete at the Olympics as they lost their game in the first round to North Korea 3-1, but scraped a berth through a 3-1 victory in the second round. Before reaching the final against France, Korea defeated Ukraine 3-1 in the quarterfinals and Spain 3-0 in the semifinals.

With a spot guaranteed at the Summer Games this year, Shin is hoping that she’ll be able to continue her incredible success.

She has her sights set on following in the footsteps of Ryu Seung-min, the president of the KTTA and a member of the International Olympic Committee, who was previously the youngest player, at age 15, to join the Korean men’s table tennis team and won a gold in men’s singles at the 2004 Summer Olympics.