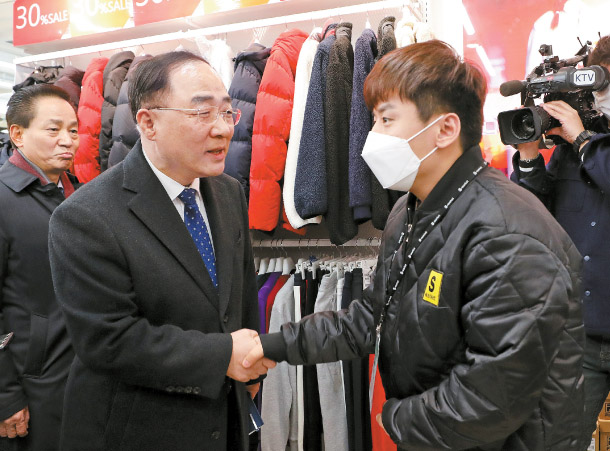 Deputy Prime Minister for Economic Affairs and Finance Minister Hong Nam-ki, left, shakes hands with an employee at a clothing store in Myeong-dong, central Seoul, on Monday. Hong inspected the Myeong-dong area to check the economic zone affected by the new coronavirus. [YONHAP]

Finance Minister Hong Nam-ki admitted that the Korean economy could take a hit from the Wuhan coronavirus infection that is spreading outside Korea and has infected 15 people here.

Meanwhile the Ministry of Trade, Industry and Energy plans to offer 400 billion won ($335 million) in trade financing to companies exporting to China that are affected.

“The negative pressure on the Korean economy is growing,” Hong said Monday during a press conference. “Private [economic] institutions estimate Korea’s annual [economic] growth could shrink 0.6 to 0.7 [percentage points] if the coronavirus continues to spread in Korea in the first quarter.

During a minister-level meeting earlier in the day, Hong expressed similar sentiments.

The government has set this year’s growth target at 2.4 percent after reporting its slowest growth in a decade last year, 2 percent.

During the press conference, Hong admitted that last year was the toughest year for the economy in recent memory.

“As you know, there were numerous difficulties including slowing growth of the global economy and the economic restructuring of the Korean economy,” Hong said. “I believe it was the toughest period in recent years.”

If the virus situation is not controlled soon, he said, the economy could be heavily affected, though its current influence is limited.

The Seoul stock market stabilized Monday afternoon thanks to massive buying by institutional investors, but worries over the virus caused a market panic earlier in the day. The Kospi lost more than 30 points and even threatened to fall through the 2,000 threshold. The Korean won dropped to close to 1,200 won against the greenback.

Hong said the government’s alert level has gone up since additional cases of infection were confirmed locally over the weekend. A total of four cases were confirmed between Saturday and Sunday, raising the total number of patients to 15.

The Ministry of Economy and Finance acknowledged that Korea’s trade with China has significantly increased since the SARS outbreak.

Hong said the government will do everything it can to minimize the impact of the coronavirus and maintain the growth momentum that has been building up in recent months.

“The latest coronavirus started in China, and our economy is closely connected to China,” he said. “This is not only a problem exclusive to China, but also connected to the global economy.

“In relation to exports, the government is working on export support measures that will be announced later this month,” Hong continued. “We are also separately preparing measures to stimulate the domestic market as the impact on the restaurant and lodging businesses concentrated on tourism will be inevitable as the number of Chinese tourists is shrinking.”

The Ministry of Trade, Industry and Energy on Monday said it will offer help of 400 billion won to companies that have directly been hit by the Wuhan coronavirus.

While the impact on factories in China and logistics is limited so far, the ministry said it may grow as the crisis continues.

According to the ministry, 95 percent of Korea’s exports to China are intermediate goods.

With Chinese production and consumption expected to shrink, Korea’s exports to China are likely to follow.

Hong emphasized that the government will not consider a supplementary budget. The government last week announced it was spending 20.8 billion won on coronavirus measures including quarantines and sanitizing.

He warned that the government will take stern measures against anyone disrupting the market for sanitization products such as masks.

There have been reports of hoarding of masks and profiteering.

“In a joint effort of related [government] departments, 120 officials on 30 teams are cracking down on such acts,” Hong said.