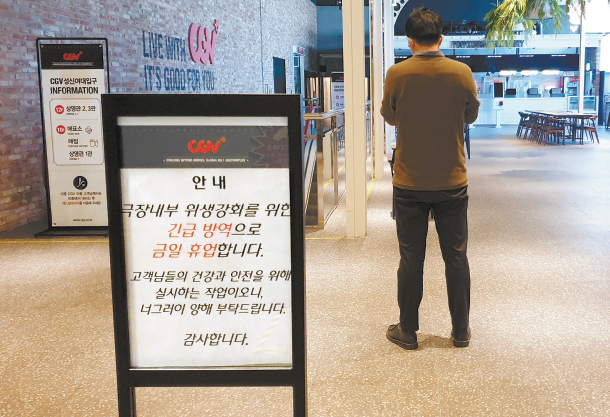 CGV’s Sungshin Women’s University branch temporarily closed down from Thursday to Sunday after the Korea Centers for Disease Control and Prevention reported that Patient No. 5 had been to the cinema on Jan. 25. After disinfecting the area and receiving approval from the health agency, the branch reopened on Monday. [YONHAP]

Concerns over the Wuhan coronavirus outbreak are taking over local cultural events as cinemas, K-pop groups and concert organizers are announcing cancellations of showings or events as they take extra precautions against the ongoing health emergency.

Two branches of Korea’s largest cinema chain, CGV, temporarily halted operations for disinfection when news broke that Patients No. 5 and 12 had been to the Sungshin Women’s University branch in central Seoul and Bucheon branch in Gyeonggi, respectively on Jan. 25 and Jan. 20.

The Sungshin Women’s University branch halted operations beginning late Thursday evening and reopened on Monday after taking preventive measures against the disease and getting official approval from the Korea Centers Disease Control and Prevention (KCDC). The Bucheon branch received confirmation that Patient No. 12 had visited its theaters on Saturday and immediately evacuated the entire complex.

“We will make a decision of whether or not the branch will reopen after we follow all the necessary precautions from the KCDC,” a CGV spokesman said.

In the K-pop industry, local idol groups’ agencies announced cancellations of fan meet events and showcases that were scheduled to be hosted in the upcoming weeks.

“We had an emergency meeting in the morning and decided to cancel the event,” said the agency. “We’ll livestream the showcase through Naver’s V Live.”

Sibling duo AKMU’s upcoming concert in Changwon, South Gyeongsang, this weekend was canceled on Monday by their agency YG Entertainment.

Major broadcasting stations have taken precautions for their music shows. All three major music programs, “Music Bank” on KBS2, “Show! Music Core” on MBC and “Inkigayo” on SBS decided to record this week’s shows without having fans in the auditorium.

Big Hit Entertainment has also canceled their “Big Hit Corporate Briefing with the Community” event, which was originally scheduled to be held today. The briefing was for press, fans and partner companies to share their achievements and updates about the company. Instead, it has been changed to a private event, and the company said it will upload a recording of the event on its official YouTube channel on Wednesday.

The musical “We Will Rock You” announced that it will go on a hiatus until Feb. 20. The musical is being staged at the Royal Theater in southern Seoul.

Another military musical, “Return: The Promise of the Day,” which features Onew from boy band SHINee, Xiumin from Exo and N from Vixx canceled performances in Goyang and Ansan, Gyeonggi, that were scheduled to be held from Feb. 7 to 9 and 21 to 23, respectively.

K-pop groups are also taking a rain check on scheduled fan meets that were set to be held overseas. Girl group Momoland postponed its upcoming fan meet in Tokyo and Osaka, Japan, on March 19 and 21, according to its agency MLD Entertainment.

K-pop artists with plans to visit China have postponed their events indefinitely.

Sechskies, which made a big return last week with its latest EP “All For You,” was planning to meet with its Chinese fans in the latter half of this month, but the event has since been called off.

Lisa, a member of the popular girl group Blackpink, was set to appear on a recorded episode of the Chinese audition program “Idol Producer“ as a dance mentor on Saturday, but her participation was put on indefinite hold by the show’s producers, her agency YG Entertainment said.

Performers from overseas that were planning to visit Korea for concerts have also put a hold on their plans. The Boston Symphony Orchestra announced that it is cancelling its Asia tour due to the virus. Its Asia tour was set to kick off in Seoul on Thursday, moving on to Taipei in Taiwan, then to Shanghai and Hong Kong throughout the month of February.

Although doors are still open at many public museums and galleries around Seoul, they are also taking cautious measures.

The Nam Seoul Annex Building of Seoul Museum of Art (SeMA) has temporarily halted all of its events this month, and all of the SeMA locations have stopped its docent programs.

Hello Museum in eastern Seoul will only be open three days a week - Wednesday, Saturday and Sunday - this month. The children-centered museum is a popular spot for families that has more than 200 visitors a day.

On the days that the museum is open, it will receive visitors based only on reservations. Museum officials said that the museum will disinfect the facility two times a week for the safety of the children who visit.