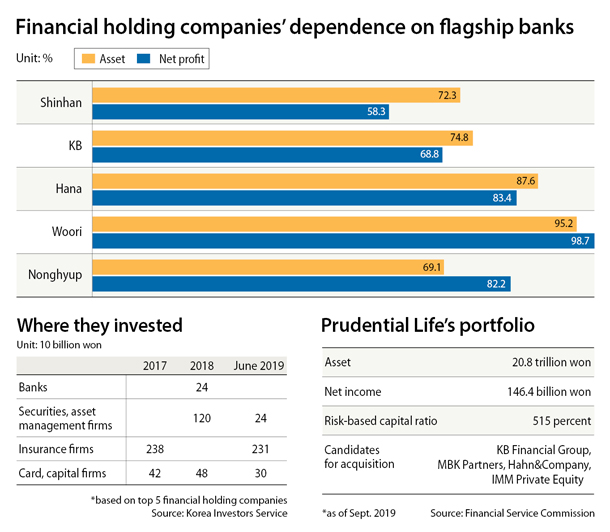 Despite Korean insurance companies having one of their worst years in recent memory, financial holding companies here can’t seem to get enough of them.

This year, Prudential Life Insurance is a big fish in the market, with a bidding price expected to be near 2 trillion won ($1.7 billion). KB Financial Group is among several private equity funds that have participated as a bidder.

In their New Year’s speeches, chiefs of major financial holding companies have unanimously emphasized their interest in mergers and acquisitions (M&A) to fortify company portfolios.

As of June 2019, Korea’s top five financial firms - KB, Shinhan, Hana, Woori and Nonghyup - reported that 78.7 percent of their assets and 75.1 percent of their net income derived from banks.

But the outlook is grim this year, following the central bank’s decision to maintain the low base rate. The net interest margin, the difference between the amount of money generated by financial institutions from interest rate and the amount of interest paid out to the lenders, dropped from 1.62 percent in the first quarter of last year to 1.59 in the third quarter.

The Bank of Korea may even drop the key interest rate in the first half of this year.

That is why major financial firms are expanding their portfolios into non-banking sectors, such as in insurance and securities.

The Korea Investors Service in December released a report saying that the low key rate and low-growth economic environment has led to unfavorable conditions for bank operations. It said the profitability of banks will drop, and dependency on net income will fall more drastically than dependency on assets, which will eventually lead to more demands for expansion in non-banking sectors.

In 2017, KB Financial was able to take the lead in the banking business after acquiring LIG Insurance in 2015 and Hyundai Securities in 2016. Shinhan Financial Group snatched back the top spot by acquiring ING Life in 2018 for 2.3 trillion won. At the time, ING Life had assets worth 31 trillion won.

For KB Financial Group, Prudential Life is a more than a tempting item, with 20 trillion won in assets and 144.8 billion won of operating profit, based on 2018 figures. While KB Financial is a leading player in banking, card, securities and other sectors, it lacks substantial investments in the insurance industry.

The insurance industry may be experiencing slow growth, but it’s a different story for the intersection of insurance and technology, another reason financial groups are eyeing insurance companies despite their low profitability.

The number of those firms included in the list of top 100 financial tech firms announced by global consulting company KPMG International Cooperative and investment company H2 Ventures rose from 11 in 2018 to 17 in 2019.

“Besides the case of Orange Life, there are a lot of cases where [M&A] only end up in intensified competition and poor operation,” said Jo Bo-ram, an analyst at NH Investment & Securities in a report.