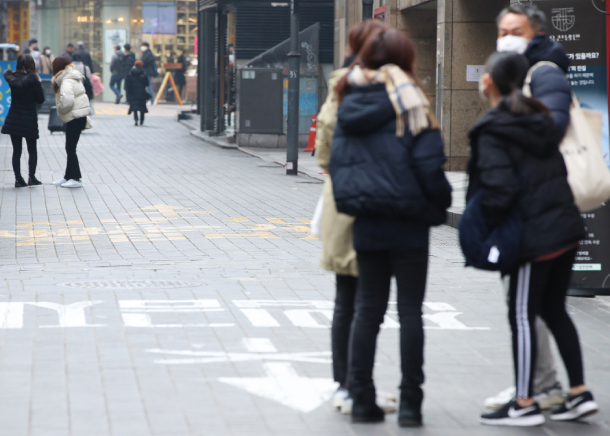 A street in Myeong-dong, central Seoul, is filled with less people than usual on Sunday, following the outbreak of the Wuhan coronavirus. [YONHAP]

The Korean tourism industry is in a panic after the government announced it was limiting the entry of Chinese citizens into Korea as it works to stop the new coronavirus from spreading.

“Since last week, calls cancelling reservations have been pouring in because of the new coronavirus,” said Lee, who runs an Airbnb.

The number of Chinese nationals traveling to the neighboring peninsula has been slowly recovering after the Chinese government banned group tours in retaliation to the Korean government installing a U.S. defense system at a golf resort in Sangju, North Gyeongsang, in 2017.

But the recent Wuhan coronavirus seems to reverse the recent improvement. 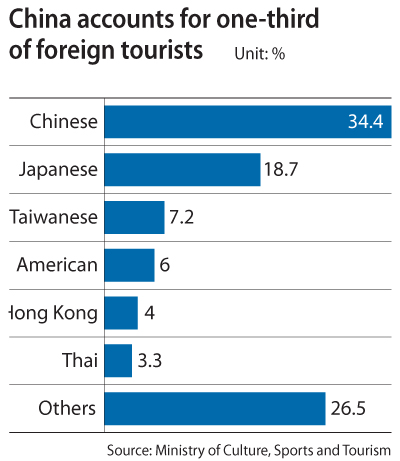 According to members of the Korean tourism industry, Chinese tourism has a significant impact.

The average per person spending of tourists visiting Korea was $1,342 in 2017. By country, Mongolian visitors spent the most on average, at $2,070, while Chinese tourists followed behind with $1,887.

Not only is that more than twice the $791 spent by the average Japanese tourist, but it also exceeds American visitors, who spend $1,190 on average.

While much remains to be seen, the local tourism industry is worried that the number of Chinese nationals visiting Korea could halve.

Although entry is currently limited only to those from Hubei Province, which includes Wuhan, the Korean government could widen the limit to all of China.

Following China’s ban on group tours to Korea, the number of Chinese tourists started to shrink in March of 2017.

Chinese tourists in July and August of 2017 nosedived more than 65 percent compared to the previous year.

By the end of that year the number of Chinese tourists who visited Korea amounted to 4.17 million, barely more than half of the 8.06 million recorded in the previous year.

As a result, earnings from tourism shrunk more than 4 trillion won ($3.3 billion), to roughly 16 trillion won, over the course of just one year.

In a recent report, Hyundai Research Institute estimated that if the coronavirus situation continues to expand, Korea could see 2 million fewer foreign tourists in the first four months of 2020. That would mean an estimated loss of 2.9 million won.

“The longer the situation extends, the [more the] domestic economy will significantly contract on the back of shrinking foreign tourists and domestic consumers cutting back on spending,” said Ju Won, a senior economist at Hyundai Research Institute.

The damage to Korea’s tourism industry could be more extensive than was the case in 2003, when severe acute respiratory syndrome, or SARS, broke out. The number of foreign tourists to Korea, and the earnings made from tourism, has more than tripled since then.

“As [Korea’s tourism industry] is heavily dependent on China, and because it’s difficult to find alternative [foreign tourists that would replace Chinese visitors], damages [from the coronavirus] will be inevitable,” said Lee Hoon, a Hanyang University professor in the school of tourism. “Once the situation settles, the [tourism industry] will recover three to four months later.”

The tourism industry recovery is likely to take some time to see a bounce back, as overseas trip reservations are usually made several months ahead.

Hanyang University Prof. Lee said it is important for the government to show that Korea is a safe country through its quarantine efforts.

“In the long run, there is a need to protect against [the potential economic fallout] by diversifying the markets,” Lee said.