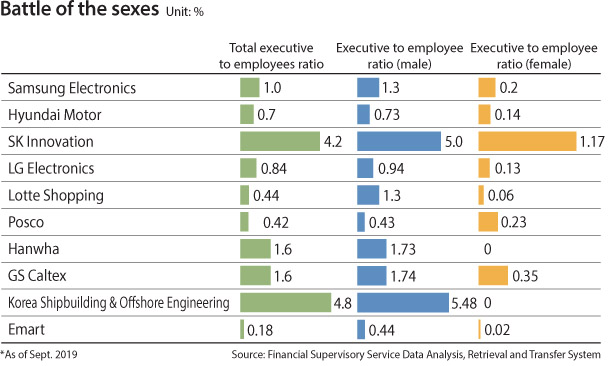 Samsung Electronics, Hyundai Motor and five other major corporations have increased the number of women in positions of power over the last three years.

Based on third-quarter reports from 2017, 2018 and 2019 by 10 companies, the ratio of female executives to female employees has risen.

Each company is mulling ways to expand women’s participation in top management partly as a result of official pressure. A revision of the Capital Markets Act, which requires more than one female on every corporate board, passed the National Policy Committee last year.

Hanwha and Korea Shipbuilding & Offshore Engineering were the two companies with no female executives.

Korea Shipbuilding & Offshore Engineering had the highest proportion of male executives to male employees accounting for 5.48 percent, followed by 5 percent for SK Innovation, 1.74 percent for GS Caltex, 1.73 for Hanwha, 1.3 percent for Samsung Electronics and 0.43 percent for Posco.

The average proportion of executives-to-employees in the 10 companies analyzed was 1.58 percent. The ratio of male executives to male employees was 1.9 percent on average. In the case of female executives, it was only 0.23 percent.

There are structural reasons for why not many women candidates are made executives. For example, Lotte Shopping’s department store division has only 10 women out of 100 managers, the rank just below executive.

But the ratio of female executives to female employees is steadily rising.

“There is no women-preference policy, but as the battery business grows, there are more opportunities for women to play an active role in marketing compared to when we only had an oil refinery business,” an official of SK Innovation said. “The human resources and strategic business teams have female executives. A surprisingly large number of new applicants are females nowadays, so the number of female executives will naturally increase.”

As companies emphasize the role of women in the workplace, some male employees worry about reverse discrimination.

One is Mr. A in Lotte Group. He is worried that he might miss his second chance at promotion due to special treatment for female employees in the same office. “After Chairman Shin Dong-bin promised the proportion of female executives would increase to 30 percent, the company has been promoting women aggressively,” he said.

“There is not much difference in terms of job capabilities between men and women,” said a female manager at Shinsegae Department Store. “As a working mom, I feel comfortable with female superiors with children. The more female executives we have, the more female employees will be nurtured.”

“In the end, the companies will decide based on their working performance,” said one corporate manager. “The current controversy is due to the small pool of female managers. This issue will naturally disappear when the current deputy general managers reach their senior level.”