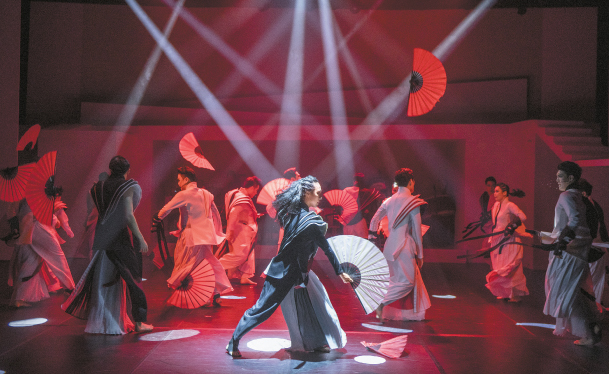 “Red Cliff: Chibi,” a mix of pansori (traditional narrative singing) and modern dance will be performed at Jeongdong Theater in central Seoul from Feb. 14 to April 5, as part of renewed programs at the theater, which recently announced its decision to provide more variety in its shows in addition to the traditional music and dance offerings it has previously staged, as the theater enters its 25th year. [JEONGDONG THEATER]

Jeongdong Theater, known for decades among tourists in Seoul as the center for traditional arts and music performances, will part with its regular traditional programs starting this year.

“We have maintained for years regular traditional performances for foreigners, having hosted as many as 8,825 such shows,” said Kim Hee-chul, director of the theater at a press conference hosted at the theater in central Seoul on Jan. 16. “They have played a crucial part in introducing some of the beliefs and values of traditional Korean society. But the tourism environment has changed and we are ready to adapt and redefine our identity as a public theater.”

Last year’s regular program was “The Palace: Tale of Jang Nok-Su,” which ran from March to December. It incorporated traditional dances of Korea such as janggu dance (dancing with an hourglass-shaped drum strapped to one’s shoulder), hanryang dance (a form of dance that tells a story using characters including hanryang, a word used in the past in Korea to describe men of wealth and connections but not much intellect, a gisaeng, or female courtesan, and a monk), a form of salpuri dance (traditional Korean soul-purifying dance) and fan dance.

It was one of the most popular programs among foreign audiences at the theater, following “Love Songs from Chunhyang” from 2010 to 2013, according to the theater.

“Jeongdong Theater was established to promote both traditional arts, music and dance, as well as advancement in the performing arts sector, and we believe we have been focusing too much on the former goal,” Kim said. “We are therefore varying up our program to offer more plays, musicals, concerts and operas.”

Kim was formerly the head of the performing arts department of the Sejong Center for the Performing Arts. He was appointed director of Jeongdong Theater in August last year.

As part of the line-up for performances for 2020, ballerina Kim Ju-won will present her interpretations of four plants representative of four seasons in Korea. Her act, “The Season of Life,” will be presented at the theater from Oct. 22 to Nov. 1.

Musical actor Yang Joon-mo will hold regular opera concerts at the theater regularly, on dates to be set in February, June, October and December.

Several programs that incorporate modern dance and music into traditional arts and dance of Korea are also part of the new line-up, though less regularly than before.

“Red Cliff: Chibi,” a mix of modern dance with pansori that tells a Chinese classic story, will run from Feb. 14 to April 5 at the theater.

“The work is an interpretation of the traditional story with modern dance moves,” said Lee Hyun-soo, a member of the theater’s planning committee. “Another mix of the traditional and the new is a musical piece called ‘Pann: The Stage.’”

As the theater celebrates its 25th birthday this year, it is also mulling a renovation in the near future.

“The theater is old and we need to face the reality that it will need a serious renovation soon,” Kim said. “We are thinking the decision over and will be discussing the issue with the Ministry of Culture, Sports and Tourism […] But once the renovation works begin, it will be difficult to continue to hold performances at the theater. We will have to find an alternative space for that time being. But nothing is decided yet.”

As part of the initiative to diversify its programs, the theater is seeking to work with more embassies in the future to host international film screenings.

“We have held meetings with Canadian, British and New Zealand embassies on hosting a film festival together, possibly in September or October this year,” Kim said. “More embassies may join the project.

The mother theater of Jeongdong Theater, the National Theater of Korea, also announced last month its line-up of performances for 2020. The theater is 70 years old this year and will be collaborating with the national troupes on theater, ballet, dance, opera, changgeuk (traditional Korean opera), choir and orchestra performances.

“Korea opened the national theater in 1950,” said Kim Chul-ho, director of National Theater of Korea. “It was a difficult time to make ends meet, but those are the times when we need culture and arts even more. Some pioneers of the country saw that.”