Kim Eui-kyeom gives up his bid

Kim Eui-kyeom gives up his bid 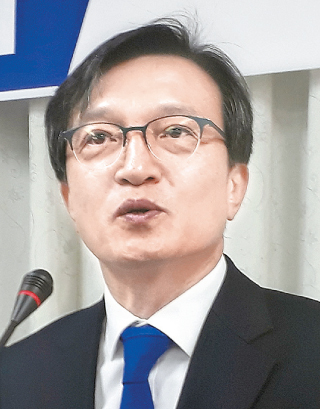 Former presidential spokesman Kim Eui-kyeom, who resigned in March after an explosive backlash to reports that he dabbled in real estate speculation, possibly with inside information, said Monday he will stop seeking the ruling party’s nomination for the April general election.

Kim, who declared his bid on Dec. 19, 2019, to become a lawmaker representing his hometown of Gunsan, North Jeolla, posted a message on his Facebook to announce his decision to not run.

He said he wanted to work for the success of the Moon Jae-in administration and development of Gunsan’s economy. “I did all I can to prove my usefulness. Sometimes, I writhed. But the time has come for me to stop. I won’t run in the general election.”

During the past 47 days, Kim had faced a series of ordeals. Because allegations surrounding his real estate speculation continued, the Democratic Party (DP) has postponed its decision three times on whether he is fit to run in the primary to win the nomination.

Kim made public his decision on Monday morning, one hour before the DP’s candidate verification committee held a meeting.

After the DP leadership asked Kim to stay out of the election on Jan. 27, the committee held a meeting and delayed its decision.

Following his posts, DP lawmakers once again tried to persuade Kim to not run in the April 15 general election. “We told Kim that we understand his intention, but the party has no plan to change its position on real estate policy,” a key member of the DP told the JoongAng Ilbo. “Kim understood this and decided to protect his honor.”

DP sources said the party had decided to rule Kim unfit as a candidate and hinted that to him to pressure his decision. “It was Kim’s own decision to not run,” said DP Secretary General Yun Ho-jung. “The party’s position has never changed.”

The Moon administration has announced a total of 18 measures to stabilize the real estate market. While serving as Moon’s spokesman, Kim purchased a building inside a redevelopment zone for 2.57 billion ($2.2 million) won in July 2018. He sold the property for 3.45 billion won in December last year, earning 880 million won of profit.

Although Kim donated 370 million won, which according to him was any profit he made minus expenses such as tax and mortgage interest payments as well as brokerage fees, to the Korea Student Aid Foundation, public sentiment remained unfavorable.

Party officials said they were worried that Kim’s case would eventually affect the entire campaign. “We had to make a political decision, not just based on whether he is competitive enough to win the [Gunsan] race or not,” a member of the candidate verification committee told the JoongAng Ilbo.

“The party was under great pressure,” Yang Jeong-cheol, head of the DP’s think tank, the Institute for Democracy, told reporters. “I guess he knew the sentiment inside the party was that he should make an honorable choice.”

The candidate verification committee held a press briefing in the afternoon and announced that it has found no fault in Kim’s real estate investment, offering a clear path for Kim’s next career. “He did not make a speculative investment,” the committee said. “He also did not receive any special treatment in taking out a loan.”

“He is well-connected with key members of the party,” said a DP official. “There will be other opportunities for him. He gave up the bid at the best time.”