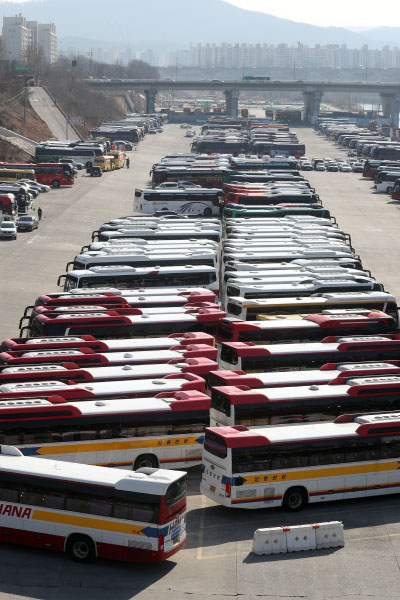 Tour buses sit idle in a parking lot near the Han River on Monday after tourists declined drastically due to the fear of the spread of the new coronavirus.[NEWS1]

Local health officials said Monday that one of Korea’s first coronavirus patients might soon be discharged from the hospital given his “greatly improving” condition.

Korea has confirmed 15 cases of the virus since Jan. 20, but no one has recovered and been discharged from a hospital. Neither has any patient died or been reported to be in critical condition.

The Korea Centers for Disease Control and Prevention (KCDC) said in a press briefing that Korea’s Patient No. 2, the second person in the country to be diagnosed with the disease, was recovering so well that he recently tested negative on the coronavirus test and stopped receiving antiviral drugs.

The agency said the government was canvassing opinions from experts to decide whether to allow him to leave the hospital, which would be the first such case.

The government has labeled each patient by the order in which they were diagnosed. Patient No. 2 was identified as a 55-year-old Korean national who arrived in Korea on Jan. 22 from the Chinese city of Wuhan, Hubei Province, the epicenter of the outbreak. He tested positive for the virus two days later and is being quarantined at the National Medical Center in Jung District, central Seoul.

He was believed to have been in the physical proximity of 75 people after returning to Korea, but none have tested positive for the virus so far.

As of Monday morning, data from the KCDC tallied 17,205 infections and 362 deaths in China. Outside China, more than 20 countries have reported patients, with the Philippines reporting one death.

As the outbreak continues to spread, some nations have reported cases of full recovery. China’s state-run Xinhua News Agency reported Monday that a total of 475 patients have been discharged from hospitals after recovery. Last Friday, CTV News reported that Canada’s first coronavirus patient was discharged from a Toronto hospital as his status continued to improve and no longer required in-patient care.

Korean health authorities are hoping Patient No. 2 will mark a turnaround in the country’s handling of the outbreak - with the health hazard completely under control.

On Monday, the nation’s infection toll remained at 15, marking the first day it hasn’t risen since last Thursday. The KCDC tracked two new patients on Thursday, followed by five on Friday, one on Saturday and three on Sunday.

Health Minister Park Neung-hoo told reporters Monday that the next seven to 10 days would be “a very crucial moment” for the Korean government to halt the spread of the virus, vowing to “combine forces” with every ministry and local government office to accomplish that mission.

As a first step, the KCDC pledged Monday to enforce tougher quarantine measures against the coronavirus by isolating everyone who was in the physical proximity of infected patients in their homes for 14 days, the incubation period of the virus.

That applies to at least 913 people who, according to the KCDC, were within 2 meters (6.6 feet) of the 15 infected patients or were in the same “closed space” like a restaurant, when the patients coughed without a mask on.

Under this new system, the government will also assign one local government official for each quarantined person to closely monitor their symptoms.

Korea’s southernmost Jeju Island had a scare after it was revealed that a Chinese tourist who visited the island two weeks ago was confirmed to have contracted the disease last week after she arrived back home in China. She bought a fever reducer at a pharmacy while staying in Jeju.

Fever is a common symptom of the coronavirus, which meant the tourist might have traveled around the island while showing symptoms. Jeju officials, however, said Monday that the tourist’s daughter, who traveled with her mother, told Jeju authorities that the fever reducer was a gift for someone back home.

Jeju officials are now investigating the patient’s travel on the island and asking islanders whether they were feeling any symptoms.

Schools are taking matters into their own hands by temporarily closing down or postponing the opening of the spring semester. The Ministry of Education said Monday that at least 484 kindergartens, elementary, middle and high schools have informed them of such plans, mostly in areas where infected patients lived or roamed around.

A ministry spokesperson said the government was planning to hold a meeting with university officials later this week to decide whether the government should advise universities to delay their spring semester openings, which mostly fall on March 2.