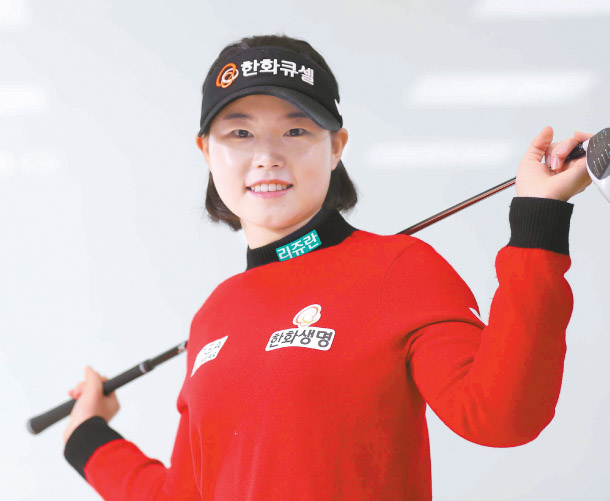 Having picked up three wins during her rookie season in 2019, Lim Hee-jeong hopes for a better season as she’s spent her offseason treating her ankle. [KIM SANG-SEON]

Despite a successful 2019 season as a rookie on the KLPGA Tour, Lim Hee-jeong chose not to go overseas during the offseason and will instead stay in Korea to prepare for this year.

The decision is not to spend more time with her friends, but rather to treat her right ankle. Throughout the 2019 season, Lim played with a torn ligament in her right ankle. Although she needed surgery, she chose to play through the season, and her strong will to play paid off as she picked up three wins.

“To be honest, at the time, I did need to get surgery and take some time off for a medical reason,” Lim said. “But if I did that as a rookie, I felt like I would fall behind and that would just be considered as my excuse forever, so I didn’t.”

Despite her ankle being in such bad condition, Lim said when she was playing her rounds, she didn’t have much time to think about the pain, as she was too focused.

“I may have been so focused that I didn’t really feel [the pain],” Lim said. “But after the round, it hurt so bad.”

Due to her struggle, some of the fans showed disappointment as she was already a star player as an amateur, representing Korea at the 2018 Asian Games. At the beginning of the season, Lim played so bad that she missed six cuts until August. Although she’s had some top-10 finishes, it didn’t meet up to the expectations she had placed on herself.

Despite the disappointment, she never mentioned her ankle injury to the media.

“I didn’t really want to talk about it,” Lim said.

As she continued to play through the season with injuries and rehabilitation, her ankle started to get slightly better, and starting from the end of August, she became a different player.

Lim chose golf instead of bowling because “at the time, bowling balls were too heavy.”

Not too long after she started playing golf, Lim played her very first round at High1 Country Club in Jeongseon, Gangwon. But after that, it took her four years to play her second official round at a golf course, which was also her first-ever tournament in fifth grade in elementary school.

“I worked on my course management at a screen golf club in my neighborhood,” Lim said.

Despite the limited opportunity for Lim to practice on actual grass and the course, she earned her spot on the national development team in second grade of middle school.

Although Lim joined the national team and saw success on the KLPGA Tour in her rookie season, she had a different career path from other players. While hopefuls tend to start competing at a young age, Lim waited until she was in fifth grade in elementary school, on instructions from her mother.

“My mom told me to wait because if I started playing in tournaments when I was too young, then I would get disappointed [if I played badly],” Lim said. “I understand, but at the same time, I have some regrets regarding that because I feel like it could have stimulated me more.”

The area she lived in, in the northern part of Korea, was not the best environment for the sport, but Lim overcame that disadvantage with more practice. The young Lim looked through clips of golfers’ swings and compared it with hers.

For Lim, getting lessons every week or two wasn’t an option. Instead, it was a once-a-year thing. At the time, there was an event where coaches visited areas to offer a “one-point lesson” to a local prodigy.

“I wrote down everything I wanted to learn and asked it all,” Lim said.

Although she spent most of her time practicing her swing by herself on a mat, it has now become a swing that other players study intently.

“I think I got to this point because my mom understood me, rather than pushing me,” Lim said. “We’re really close friends.”

Looking at Lim’s performance in the first half of the season, she said it wasn’t just her who was in pain. As her mother was also sick at the time, Lim said that affected her, perhaps more than the physical pain she was in.

However, as her mother started to get better in the second half of the season, Lim, too, performed better.

She picked up her first win in August at the High1 Resort Ladies Open 2019. That win came as quite a surprise as she had missed six cuts up until that point. Then, a month later in September, Lim picked up her second win of the season at the All for You Renoma Championship, and then in October, she won her third tournament, a major, the KB Financial Group Star Championship.