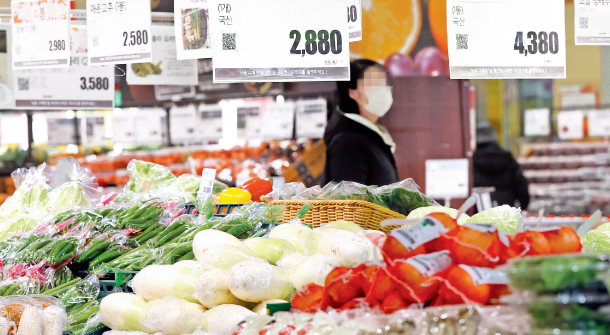 The prices of vegetables are posted at a large grocery store in Seoul Tuesday. The consumer price index (CPI) was up 1.5 percent to 105.79 in January compared to the same month last year, according to Statistics Korea. The price increases of agricultural products and oil contributed to the recovery of the CPI. [YONHAP]

The country’s inflation also rose 0.6 percent on-month in January on the back of increased prices of agricultural and industrial products, according to Statistics Korea.

Utility prices were unchanged on-year in January, while prices of agricultural, livestock and fisheries products went up 0.6 percent, the data showed.

“In January, a rise in consumer prices was driven by gains in oil prices and agricultural products,” Ahn Hyung-joon, a Statistics Korea official, told reporters.

Concerns about the economic impact of the new coronavirus are likely to affect consumer prices in February, Ahn said, but it is too early to predict how the virus will affect inflation in Asia’s fourth-largest economy.

The country’s inflation has been extremely weak, staying far below the Bank of Korea’s 2 percent target as companies and consumers tighten their spending.

The statistics office expected consumer prices to hover above 1 percent this year.

The Bank of Korea slashed its key rate twice last year to support growth amid the U.S.-China trade war.

Last year’s weaker inflation was attributable to a base effect because consumer prices were relatively high in 2018, Ahn said.

In a statement, the Ministry of Economy and Finance said the government will closely monitor the trend of consumer prices this year. 