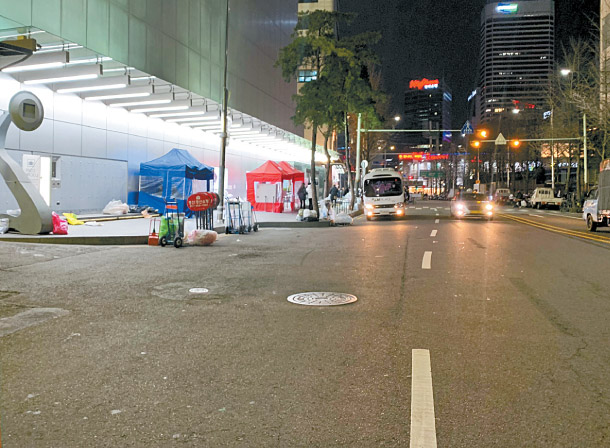 Few customers are venturing into Seoul’s markets and shopping districts as the coronavirus outbreak drags on, with sales dropping by as much as 40 percent in popular locations including Dongdaemun, Garosu-gil and Insa-dong.

The number of visitors to Dongdaemun, one of the biggest fashion districts in central Seoul, has fallen by half since the Lunar New Year holiday.

Wholesale Mall Theot in Dongdaemun is a favorite shopping spot for tourists, with hours running from dawn until noon. On Monday morning, the normally packed marketplace was a ghost town, populated by only a few retailers and fabric sellers wearing masks.

“There is no one around the streets or in the mall since the new year holiday,” Joo Young-jo, a 28-year-old employee at Theot, said. Sales dropped by 30 to 40 percent on average, according to the Corporation Dongdaemun Fashion Town Tourism Zone Association.

And the Korean fabric market is also reeling, with Chinese textile imports largely cut off.

One fabric market in China has postponed its opening date from Feb. 8 to the end of the month, leaving Korean retailers to search out new domestic suppliers. Domestically produced fabrics can cost twice as much as those imported from China.

Companies that use domestic fabrics are also anxious.

Choi Jung-woo, 44, has operated his store in Dongdaemun for more than 10 years.

“We don’t supply much from China, so sales have decreased by 10 to 20 percent,” he said. “But the whole ambiance is so bad that I am worried [about] this state dragging on.”

The district office of Jung District in central Seoul is taking preventive measures against the coronavirus in major areas and has established a center to provide supplies to night visitors in Dongdaemun. The office plans to raise 4 billion won for low-interest emergency loans to support small- and medium-sized businesses targeting tourists.

“Although we are taking self-defense measures, small businesses are suffering too much even in areas where there’s not been a diagnosed case,” said Seo Yaong-ho, head of the Jung District office.

In Garosu-gil, a trendy shopping district in Shinsa-dong, southern Seoul, only two guests bothered to peruse the wares at a brand store Monday afternoon, despite a giant sign advertising “up to 80 percent discounts.” Restaurants were similarly unpopular.

In the daytime, tourist-heavy Insa-dong, central Seoul, was also desolate.

“Sales have dropped from 2 million won to 200,000 won per day due to a sharp drop in the number of customers since last week after the new coronavirus outbreak,” said Byun Hong-seop, who runs a traditional handicraft store in the neighborhood, noting that he has begun closing three hours early for the lack of customers.

Byun added, “This is not enough to even pay the rent.”

Only a handful of customers were visible in Insa Korea, the major shopping complex in Insa-dong that provides a variety of Korean traditional souvenirs.

“The shops are usually so crowded at this time of the day [1:30 p.m.] that the crowd covers my sight across the street,” said a person who declined to be identified.

Group tours were also canceled, adding to the emptiness.

“The economy has been bad all along, but the new coronavirus has made it worse,” Jung Yong-ho, president of Insa Traditional Culture Association Corporation, said.

“It’s so frustrating, because there is not much we can do. We can’t just close down because these are people who run shops for a living. All we can do is to provide masks and hand sanitizers for those who visit the shops.”

Jung added, “Although I want to provide masks to all visitors, the masks are incredibly expensive. To those who are cornering the stock of masks, please loosen some of your stock in the name of patriotism.”