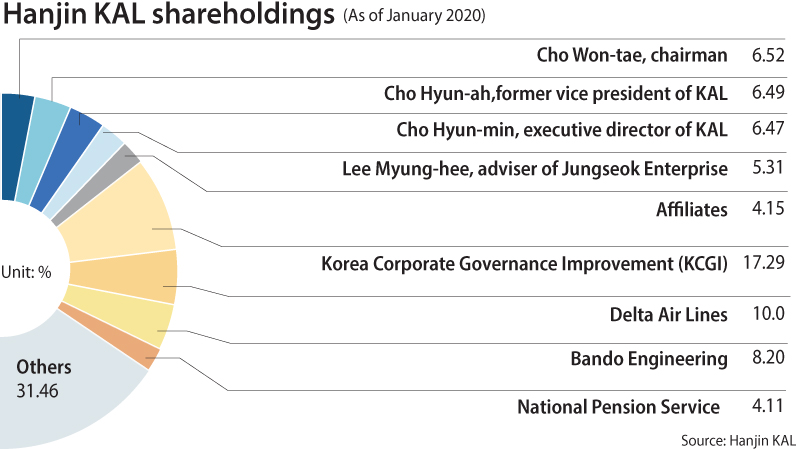 The battle for control of Hanjin KAL, and by extension Korean Air Lines, took a turn as major shareholders announced they would defend chairman Cho Won-tae from a boardroom coup.

Lee Myung-hee, the chairman’s mother, and Cho Hyun-min, the chairman’s sister, issued a statement Tuesday saying they would support Cho Won-tae as Cho Hyun-ah, another sister, works with two other major investors to oust him and replace him with a professional manager.

Cho Hyun-ah is the oldest of the three siblings and a former vice president at Korean Air Lines. She was jailed in Korea for an incident in 2014 in New York that endangered the safety of a Korean Air aircraft.

Cho Won-tae serves as chairman and CEO of Korean Air Lines, chairman of Hanjin KAL and chairman of the Hanjin Group. He became leader of the group after his father, Cho Yang-ho passed away in April 2019.

Though a legal representative, Cho Hyun-ah claimed her brother was running the business against their father’s wishes.

In late January, she teamed up with Bando Engineering & Construction and KCGI to challenge the authority of her brother.

“It is regrettable that Former Vice President Cho announced to partner with external forces. We hope she will come back to join her family and add strength to Hanjin Group’s stability and growth,” Lee Myung-hee and Cho Hyun-min said in a joint statement distributed by Korean Air on Tuesday.

“We support the idea of Hanjin Group being led by a professional manager with Chairman Cho Won-tae sitting at the organization’s center,” the statement added.

Cho Won-tae now has the backing of one sister and his mother, and may also have the support of Delta Air Lines, with 10 percent of the stock, Kakao, with 1 percent, and a number of Hanjin KAL executive. In total, the chairman and his allies have 33.45 percent of the company.

Before the family members came to his side, the chairman could only count on 16.52 percent of the votes.

The announcement from the mother and the younger daughter comes just ahead of Hanjin KAL’s annual shareholders meeting in March, where a vote will be held as to whether Cho Won-tae will stay on the board.

What transpires will depend greatly on shareholders not already committed. Together, they own 30.46 percent of Hanjin KAL.

“It will be hard for external advisors to find a clear justification to oppose chairman Cho’s reappointment to the board,” said Yang, noting that Cho Hyun-ah was recently sentenced 10 months behind bars for the incident in New York.

“KCGI suggested introducing professional managers to cover up for the shortfalls [of Cho Hyun-ah]. The big question is whether proxy advisors will be convinced,” he added.