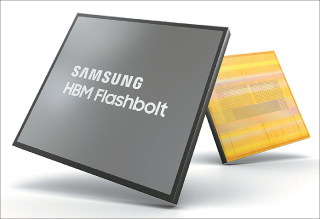 The tech giant said the new chips, dubbed the “Flashbolt,” are suitable for use on artificial intelligence-driven data analytics and supercomputers.

The new chip consists of eight 16-gigabit DRAM chips, each measuring one nanometer in size. It is the latest of Samsung Electronics’ high-bandwidth memory lineup, two years after the release of the Aquabolt DRAM.

Samsung officials say their third-generation Flashbolt is 1.75 times faster than its predecessor. The chip can transfer 410 gigabytes at a speed of 3.2 gigabits per second. It enables download speeds at the equivalent of 82 high-definition, two-hour-long movies in one second, the company said.

The chip’s processing speed can be tailored to different customer needs, but Samsung Electronics said the Flashbolt can attain a maximum transfer speed of 4.2 gigabits per second, the highest tested data rate to date.

Artificial intelligence data analysis, high-performance graphics systems and supercomputers - which all require massive amounts of calculations to be done simultaneously - were fields the company said the Flashbolt can serve.

The memory chips use a technology that vertically stacks DRAM chips cut to be as slim as paper, punching holes in them and directly connecting the stacked layers through bumps, instead of interconnecting them with physical wires. This allows for higher bandwidth while reducing the chip’s size.

In case of the Flashbolt, each of the eight thin layers of DRAM has more than 5,600 microscopic holes.

Samsung expects to begin volume production during the first half of this year.

“With the introduction of the highest-performing DRAM available today, we are taking a critical step to enhance our role as the leading innovator in the fast-growing premium memory market,” Choi Cheol, the company’s executive vice president of memory sales and marketing, said in a press release.