How to welcome the first full moon indoors: Ring in the new year with grains, nuts and a glass of cold rice wine

How to welcome the first full moon indoors: Ring in the new year with grains, nuts and a glass of cold rice wine 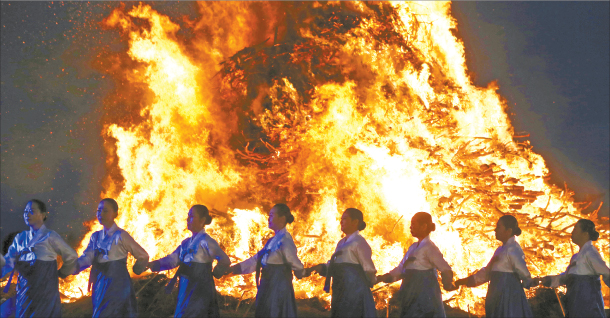 Usually, Koreans enjoy Jeongwol Daeboreum, or the first full moon on the lunar calendar, by participating in various traditional activities like setting up a large daljip, or “moon house,” and setting it on fire to ward off bad luck. However, due to the outbreak of the coronavirus, various cultural events have been canceled this year. [YONHAP]

Traditionally, on the day of Jeongwol Daeboreum, or the first full moon of the year, which falls on Feb. 8 this year, organizations like national museums, traditional institutions or city governments set up a large daljip, or “moon house,” at certain locations and set it on fire to ward off any bad luck that may come in the new year.

Various traditional performances are held around the daljip, such as ganggangsullae, known as the maiden’s circle dance in English. Many people today still enjoy the tradition in Korea, and every year, they tend to visit venues where they can watch with family and friends.

However, as the country is working to prevent the further spread of the coronavirus, organizers that usually host Jeongwol Daeboreum events every year, including the Korea House and the National Folk Museum of Korea in central Seoul, as well as many county offices in the country’s southern provinces, are announcing one after another that they are canceling their celebrations this year.

Although there won’t be many large daljip set ablaze this year, the traditional holiday can still be enjoyed at home with friends and family.

Many Jeongwol Daeboreum traditions have been kept for hundreds of years. Here are some that you can try. From left: Eating ogokbap, or a bowl of rice with five different grains; playing jwibulnori, a game that children play by spinning a can filled with burning charcoal; and cracking bureom, or nuts, with your teeth to avoid getting boils on your skin and keep your teeth strong. [JOONGANG ILBO]

Busy Koreans tend to eat ogokbap, or a bowl of rice with five different grains, because its a dish that represents Jeongwol Daeboreum. But since there’s so much time to kill at home, why not try making your own ogokbap this year?

According to Samgukyusa (Memorabilia of the Three Kingdoms), the custom of eating ogokbap began during the Silla Dynasty (57 B.C. to A.D. 935). Legend says that a crow saved King Soji, the 21st king of Silla, from being assassinated on the day of the year’s first full moon, so that henceforth, Jeongwol Daeboreum was honored with a ceremonial offering of mixed grain rice.

The types of grains used vary from region as people prefer to include ingredients they can afford or are abundant nearby. But generally, the ogokbap you can cook at a home in Seoul will include chapssal (glutinous rice), susu (sorghum), gijang (proso millet), chajo (glutinous millet) and adzuki beans. Grains can be easily purchased at supermarkets, especially in small portions during the week of Jeongwol Daeboreum. It’s not difficult to cook - all you need is enough time to steep the grains before cooking them. Step-by-step recipes are available on YouTube by searching “ogokbap.”

One of the most popular traditions of Jeongwol Daeboreum is cracking bureom, or nuts. There are various ways to crack nuts, but on Jeongwol Daegoreum, you have to use your teeth. The list of nuts you can crack includes peanuts, pine nuts, chestnuts, gingko nuts and even walnuts.

In the past, Koreans believed that if the number of nuts you crack with your teeth equals your age, you will avoid getting boils on your skin as well as have strong and healthy teeth. These days, hardly anyone cracks walnuts with their teeth and many choose to open up just two or three to eat.

On the morning of Jeongwol Daeboreum, adults often drink a cold rice wine known as guibargi wine. This ritual has long been enjoyed by adult men who believes that it will allow them to hear only good news all year round, plus improve their hearing.

There’s no special recipe to make this cold wine, but in the past, people enjoyed drinking leftover cheongju, a Korean liquor that is usually clear and made with fermented rice or other crops, from the ancestral ceremonies held during the Lunar New Year holiday held only few weeks prior.

Another tradition that has carried on throughout the years is calling your friends and family on the day of Jeongwol Daeboreum to sell them some heat. But you have to be sure to talk to them before sunrise.

If a family member or friend responds to you after calling their name, you can immediately say “Buy my heat,” to them. As soon as you say this phrase, the recipient is believed to absorb all the heat that you would otherwise feel in the coming summer. You can sell your heat more than once, to as many people as you want. However, no money should be exchanged during the process.