Lee Hee-jun makes his biggest transformation yet: For his role in ‘The Man Standing Next,’ the actor gained 25kg

Lee Hee-jun makes his biggest transformation yet: For his role in ‘The Man Standing Next,’ the actor gained 25kg 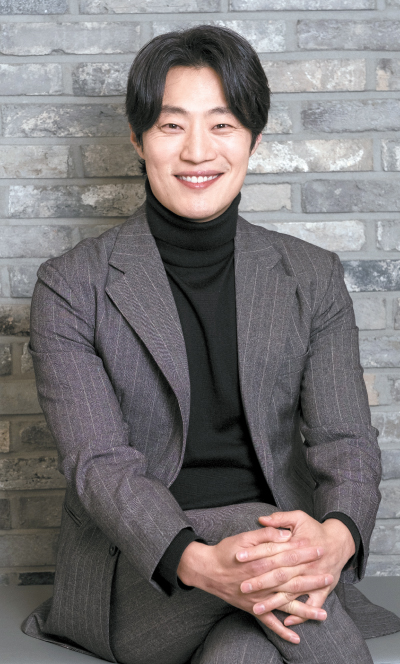 At press conferences, actors often say that they “hope to show a new side” of themselves that the public hasn’t seen before. But for actor Lee Hee-jun, audiences will truly see him as they never have before in the film “The Man Standing Next.”

To portray his character Kwak Sang-chun, Lee went through radical transition both physically and mentally, including gaining 25 kilograms (55 pounds) in three months.

“There was absolutely no pressure from director Woo Min-ho asking me to gain weight,” said the actor at an interview at a cafe in Samcheong-dong, central Seoul. “But when I read the script, I naturally felt that Kwak should have this weight. Later on, after I fattened up, Woo told me that he already knew that I would make this decision when he gave me the script. (laughs)”

“I felt like I was wearing a well-crafted body mask,” Lee added. “I began to enjoy the difference on the set, but still, I felt somewhat betrayed when I saw how Thor gained weight [in ‘Avengers: Endgame’]. The actor [Chris Hemsworth] will still have a good body because the fat of his character was made from silicon. I thought that Korean actors had to go through a lot more [to play their roles]. [We] don’t have silicon fat. We need to fatten up for real and even risk getting diabetes.”

After maintaining the weight for nine months during filming, Lee slimmed down again in three months after his doctor warned him that the extra weight would affect his health.

However, Lee said that physical transition was nothing compared to the process of understanding the character. 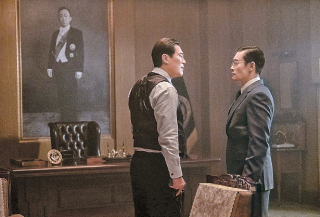 Kwak Sang-chun (played by Lee Hee-jun), left, and Korean Central Intelligence director Kim Gyu-pyung (played by Lee Byung-hun) argue over what is best for President Park in “The Man Standing Next.” [SHOWBOX]

“I was so excited [to have received this script], but after I calmed down, I felt a streak of fear,” the actor said. “He says such terrible things and does things that I did not understand at all. If I met a person like Kwak in real life, I wouldn’t be within a 10 meter (33-foot)-radius of him.”

If Lee Byung-hun and rest of the characters had to mask their emotions or conceal their real intentions, Kwak, on the other hand, is a very simple man. As the chief bodyguard of President Park, he steadfastly remains fiercely royal to his leader, ready to sacrifice everything, even his life, for the president. One of Kwak’s lines that shows the extent of his devotion, and also his indifference to cruelty, makes it more chilling when he eagerly suggests to the president to “massacre a million people” to detain democratic uprising against the military government in Busan and Masan in 1979.

“It was so horrifying,” Lee said, referring to Kwak’s nonchalant suggestion for a massacre. “Which made it more than difficult to understand Kwak […] What I focused on most [to understand him] was to look beyond the final 40 days. I formulated the character based on research and meticulous reasoning - how he had grown up, met Park during the May 16 military coup, and how Park trusted and took care of Kwak. After going through all of that together, from Kwak’s perspective, Park may not be his biological father, but nevertheless his real father, the only person that trusts and dotes on him like no one else had.”

According to the actor, all of Kwak’s lines were straightforward - there would be no hidden intentions, no double contexts to mull over.

“But that was also a change for me too, because all the other characters that I played before were so complicated,” Lee said. “I usually played roles that would say one thing, but secretly had another subtext, layer or intention and that’s the kind of charisma that [everyone] found attractive.

“Kwak is different. When he tells Kim Gyu-pyung to ‘do well,’ he is simply telling him to improve for the sake of the president’s well-being. At first, it was very strange [to play a simple character], like I was missing something. I wondered if I, like the others, should bring a complex set of emotions to the character. But in the end, leaving that out made the character more real, someone who truly existed in the era [of the Park Chung Hee regime].”

In the end, the actor learned to sympathize with his character.

“Personally I found Kwak repulsive, but as I continuously tried to feel for him, I thought that maybe he did the best he could from his position and situation,” the actor said. “I tried to lower my barrier and my stereotypes not only about Kwak, but my acting as well. After all, each of the characters we act believes that what they do is the right thing to do.”

As Lee tackles one role after another, he says that what attracts him most about being an actor is his growing capacity to understand diverse sides of humanity. In “Haemoo” (2014) Lee is a sailor loyal to his desires, in “1987: When the Day Comes” (2017) a righteous reporter seeking justice at the risk of his life and loved ones, while in “Miss Baek” (2018) he is a responsible police detective.

“If I hadn’t done ‘Haemoo,’ I would have never had an opportunity to meet and talk to fishermen and to ask them about their hardships. In ‘1987: When the Day Comes,’ I wondered if I could have written that article if I was a journalist. In ‘Miss Baek,’ I came to understand the detective’s motive to protect this woman.

“As I grow older and luckily ended up playing characters with diverse personalities, I feel that little by little, the range of my ability to sympathize is growing wider,” the actor said. “[As I continue to act] I have this anticipation for how far and wide my tenacles can spread to feel empathy [for new characters].”