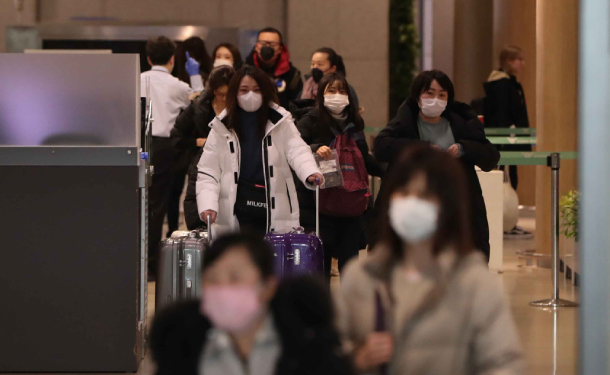 One more person was diagnosed with the new coronavirus Tuesday, bringing the total number of infected patients in Korea to 16.

Local health officials identified Korea’s Patient No. 16 as a 42-year-old Korean national who seems to have contracted the disease in Thailand during a visit there last month. That would mark the second time that a coronavirus patient in Korea contracted the virus in a foreign country other than China, where the epidemic broke out.

Patient No. 12, who worked as a tour guide specializing in Chinese visitors, was infected in Japan during a business trip.

Officials from the Korea Centers for Disease Control and Prevention (KCDC) are trying to figure out how many people Patient No. 16 came into contact with in Korea after her arrival from Thailand. Based on that information, scores of people could be quarantined for 14 days, the incubation period of the coronavirus.

KCDC officials said Patients No. 1 through 15 are in stable condition. All are hospitalized in government-designated hospitals for isolated treatment. Patient No. 2 will likely be the first patient to be discharged after the KCDC said Monday that his condition was “significantly improving” and possibly good enough to go back home.

Chung Ki-hyun, head of the National Medical Center in Jung District, central Seoul, where Patient No. 2 is being treated, was quoted by Yonhap News Agency Tuesday as saying that the patient was “already fully cured,” adding he might go home as early as this week.

The doctor said he used H.I.V. drugs on the second patient. In Thailand, health officials have reported success in treating coronavirus infections with a combination of medications for H.I.V. and flu.

But Chung refrained from saying whether H.I.V. medication was a panacea for the new coronavirus, saying further research was needed, and that other hospitals in Korea appear to be using other treatments for their patients.

According to details from the KCDC and the Gwangju Metropolitan Government Office, Patient No. 16 is a Gwangju resident who traveled to Thailand with her family from Jan. 15 to 19. She said she felt no symptoms of the virus during her trip. But from the evening of Jan. 25, she felt a cold coming on.

The cold didn’t get better, so she visited Gwangju 21st Century Hospital on Jan. 27. Later the same day, she went to Chonnam National University Hospital in Gwangju, but doctors didn’t believe she could have contracted the coronavirus because she hadn’t visited China and she was diagnosed with lung disease before. She was diagnosed with pneumonia and went home.

But she didn’t recover. On Jan. 28, she went back to the Gwangju 21st Century Hospital for pneumonia treatment and went again on Saturday and Sunday. Test results showed her pneumonia-like symptoms were worsening. On Monday, she was sent to the emergency room of Chonnam National University Hospital, which put her in quarantine and asked the Gwangju branch of the Health and Environment Research Institute for a virus test. On Tuesday morning, test results turned out positive, health officials said.

KCDC officials said Patient No. 16’s family members have shown no symptoms so far and were isolated in their home. The first Gwangju hospital that the patient visited has been temporarily shut down.

Upon hearing the news that a Gwangju citizen has been infected, local government offices in South Jeolla scrambled to cancel various events this week.

As of Tuesday, the coronavirus infected more than 20,600 people around the world and killed at least 427, mostly in China. Only two deaths have been reported outside of China so far, in the Philippines and Hong Kong. Thailand has seen 25 infections.

In a cabinet meeting at the Blue House Tuesday, President Moon Jae-in pledged to end the coronavirus outbreak in Korea as quickly as possible and called on ministries to get to work.

Incheon police are trying to track down the producer of an online post late last month that claimed a patient at a medical center in the city was confirmed to have contracted the coronavirus. The post was uploaded to an online forum used by Incheon mothers and spread to another online forum used by mothers in Gimpo, Gyeonggi.

The Incheon hospital was inundated with calls asking whether the post was true. It was not.

In South Gyeongsang, police arrested a 27-year-old man for spreading false rumors about a coronavirus patient having been confirmed in Changwon.
The suspect allegedly created and spread a fake government document that described personal details of the patient, leading the area’s community health center to be paralyzed by incoming calls.

The suspect told police he was regretting his actions and didn’t know the case would spread so far.

Jeju police are investigating a 35-year-old man for spreading fake news about an infected patient getting transferred to Jeju National University Hospital.

Under Korea’s information protection laws, those who intentionally spread fake information to arouse public anxiety could face a year in prison or up to 10 million won ($8,400) in fines.

In Seongbuk District, central Seoul, workers at the district’s community health center face allegations they leaked the personal information of Patient No. 5, causing it to spread online. The Ministry of Health and Welfare asked police to investigate the case, and officers said they were considering holding them accountable for violating the duty of confidentiality in public work, which carries a two-year sentence or a five-year suspension from work.