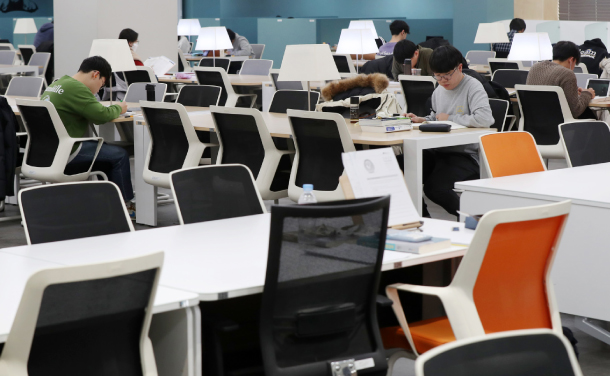 Students study in a near-empty college library in Seoul on Tuesday amid fears of the spread of the new coronavirus. Many colleges have postponed the start dates for the spring semester. [NEWS1]

Schools are temporarily closing down or postponing the opening of the spring semester to prevent the further spread of the Wuhan coronavirus.

According to the Ministry of Education on Tuesday, at least 372 kindergartens, elementary, middle and high schools across the country temporarily closed down or postponed the opening of the spring semester amid growing concerns about the spread of the virus. Of them, more than 70 percent, or about 267, were kindergartens.

After it was confirmed that Patient No. 12, a 48-year-old Chinese national, and his wife, Patient No. 14, visited Gangneung in Gangwon on Jan. 23, Gangneung Provincial Office of Education suggested public and private kindergartens temporarily close until Wednesday.

Kyunghee University announced on Monday they decided to postpone the opening of the spring semester for a week to prevent the further spread of the coronavirus. Sogang University and Dankook University also postponed their opening for two weeks.

Kyunghee University also ordered 150 students from its Institute of International Education in central Seoul who visited China, as well as who had contact with Chinese nationals while in Korea, to go into quarantine for two weeks. The students are staying at a dormitory building outside of the university and taking online courses. The school also said it will quarantine newly enrolled Chinese students, who plan to arrive in Korea by the end of the month, before they start to attend classes.

Chung-Ang University installed thermal cameras in its dormitory buildings and international office to conduct temperature checks on students. The university will order all students who plan to enter school from China to submit photos of their chest X-rays that have been taken within the last two weeks. Two floors of a dormitory building in southern Seoul are being left empty in case students show symptoms of coronavirus and need to be quarantined.

Yonsei University in western Seoul canceled an inaugural ceremony of its new president Suh Seoung-Hwan that was planned for Monday, as well as its entrance and graduation ceremonies that were scheduled to be held in February.

Gangwon Provincial Office of Education announced on Tuesday that it enforced tougher measures to prevent the further spread of the coronavirus and ordered all students who have visited China, regardless of if they display symptoms or not, to go into quarantine for 14 days from their time of arrival in Korea.

Kangwon National University canceled its graduation ceremonies which were scheduled to be held in its Samcheok campus on Feb. 20 and its main campus in Chuncheon on Feb. 21. The university also canceled many events including its overseas volunteer program in which students were supposed to leave to Laos from this Monday to Feb. 15.

The university ordered seven students from a division of language education who visited China during the Lunar New Year break to go into quarantine for two weeks. Also, it will quarantine 55 newly enrolled Chinese students and 18 exchange students from China, who plan to arrive in Korea by end of the month, before they can attend classes.