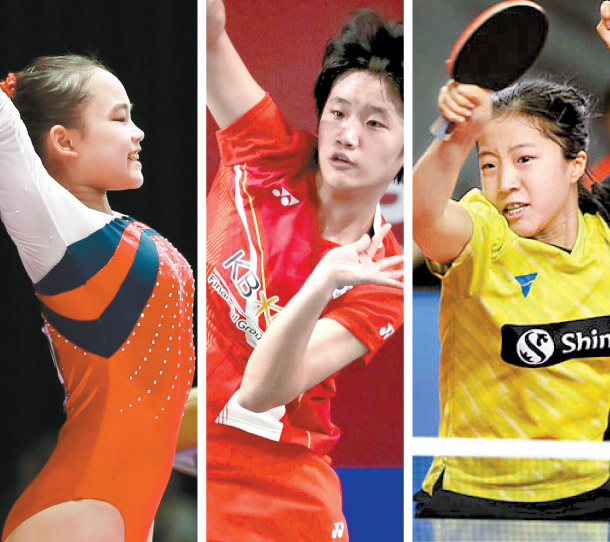 They might be young, but they are not to be underestimated.

At the 2020 Tokyo Olympics, some of the younger members of Team Korea are expected to play vital roles in winning medals. In gymnastics, Korea is hoping to see a medal from 17-year-old Yeo Seo-jeong in women’s vault, while in badminton, 18-year-old An Se-young is leading the women’s team. Most recently, 15-year-old Shin Yu-bin garnered attention as the key player for the Korean women’s table tennis team.

Away from their respective sports, they may seem like normal teenagers, but once they put on the uniform with taeguk marks, all three prodigies prove why they represent Korea.

In women’s gymnastics, Korea is hoping to see success with Yeo. Before she gained recognition based on her own performances, Yeo was already a familiar name in Korean gymnastics as the younger daughter of Yeo Hong-chul, who won silver in men’s vault at the 1996 Summer Olympics in Atlanta.

Her mother, too, was once on the Korean gymnastics team, so she has lofty footsteps to follow.

When she first started, she competed in events across the board, but she was outstanding in vault. After focusing her efforts on that event she rose to the stardom by winning gold at the 2018 Asian Games at age 16.

At times, Yeo said her father’s success added pressure on her, and ahead of the Asian Games she even considered quitting the sport. But thanks to her dad’s encouragement, she regained her confidence and earned gold.

“I was under a lot of pressure at the Asian Games,” Yeo said. “I was very nervous. At the Tokyo Olympics, I’ll have to overcome the pressure. I want to win an Olympic medal, just like my dad.”

Following the Asian Games, Yeo continued to improve. During the Korea Cup in Jeju in June last year, she successfully performed a new skill named the “Yeo Seo-jeong.” With a difficulty score of 6.2, the new vault includes a forward handspring and a salto forward with a 720-degree twist at the end. Yeo’s new skill is a mix of her father Yeo Hong-chul’s skills “Yeo1” and “Yeo2.”

After successfully performing her vault at the Korea Cup, Yeo’s vault was recognized by the International Gymnastics Federation (FIG) and was listed on the FIG Code of Points.

Despite the achievement, winning a medal won’t be easy for the 17-year-old. During the 2019 World Artistic Gymnastics Championships in Stuttgart, Germany, in October last year, Yeo once again tried her new skill, but as she couldn’t land a perfect finish she ended up finishing eighth in the event. Due to this, she is currently focusing on perfecting the “Yeo Seo-jeong” at Jincheon National Training Center in Jincheon, North Chungcheong.

“Training is tough, but I’m getting through it everyday,” Yeo said. “I’m going to try my best so I don’t have any regrets about my results at the Olympics.”

Yeo isn’t the only teenager feeling the pressure from high expectations. In badminton, An Se-young quickly made headlines with her performance throughout 2019. An started badminton in her first year of elementary school, when her parents played as a hobby. She quickly proved to be a prodigy. An used her above-average height to her advantage. Standing at 1.69 meters, she quickly topped the junior rankings in Korea. For five straight years, from 2013 to 2017, An took the title at the women’s singles event at the Yonex Korea Junior Open.

Then, in December 2017 when An was only in middle school, she was added to the senior national badminton team, becoming the first middle school student ever to qualify. But at the 2018 Asian Games, she had her first real taste of defeat after being eliminated in the round of 32.

She continued to make waves, and in 2019 she managed to win five tournaments and increase her world ranking from 99th to ninth. The massive rankings jump thanks to her impressive performance earned her the 2019 Most Promising Player of the Year award by the Badminton World Federation (BWF). She made history by becoming the first-ever Korean badminton player to win such an award.

“An Se-young has a very powerful style of play, like the men’s matches,” said Sung Han-gook, the former head coach of the Korean badminton team. “Since this kind of style cannot be seen among female players, it also works at international tournaments.”

Korean badminton may not be the best in the world, but the team has still managed to win a medal or two at the Olympics. At the most recent Rio Games, the Korean badminton team appeared less competitive, only managing to win one bronze medal. Things got worse when the country finished with no medals at the 2018 Asian Games in Jakarta-Palembang.

But the Badminton Korea Association has high expectations for this year and hopes An will bring back the popularity of the sport at the Tokyo Games. To help lessen her stress, head coach Ahn Jae-chang has been telling her, “you have to fight through [the pressure] to become a better player.”

Ahn’s advice seemed to have worked as she recently finished runner-up at the Princess Sirivannavari Thailand Masters 2020 on Jan. 26.

“I need to work harder so Korea can stand out in women’s singles at the Olympics,” An said.

Like Yeo, table tennis has always been a part of Shin’s life as her father used to be a player and operated a table tennis venue.

“When my friends were watching cartoons, I was watching clips of table tennis matches,” Shin said. “Videos about table tennis were more fun to me than cartoons.”

Shin first found fame back in 2009, when, aged just 5, she held her own against legends of the sport like Hyun Jung-hwa, who was in her 40s at the time. In 2013, when she was only 9 years old, Shin made headlines for defeating a university student 4-0 at the national championships. Last year, she earned her spot at the Asian championship by finishing third at the national team qualifier.

By doing so, she became the youngest table tennis player in Korea to join the national team at just 14 years, 11 months and 16 days old.

Despite being only 15 years old, Shin has now become an ace player on the Korean women’s table tennis team. Not only is Shin taller than other players of her age or other professional players, standing at 1.68 meters, she also doesn’t fall behind in her skills.

At the beginning of this month, Shin missed her spot onto the national team, after failing to play to her full potential in the qualifying tournament.

However, a recommendation from the Korea Table Tennis Association (KTTA) was enough to secure her a spot. And Shin proved why she earned that recommendation, playing a key role in leading the Korean women’s table tennis team to earn their spot at the 2020 Tokyo Olympics.

At the 2020 ITTF World Team qualification tournament for the Tokyo Games, the 15-year-old played a crucial role in leading the team to win the second stage by defeating France. The women’s team was on the verge of not being able to compete at the Olympics as they lost their game in the first round to North Korea 3-1, but scraped a berth through a 3-1 victory in the second round. Before reaching the final against France, Korea defeated Ukraine 3-1 in the quarterfinals and Spain 3-0 in the semifinals.

With a win, the women’s team also earned their spot onto the Tokyo Games, along with the men’s team.

Shin recently announced her decision to turn pro, rather than going to high school.