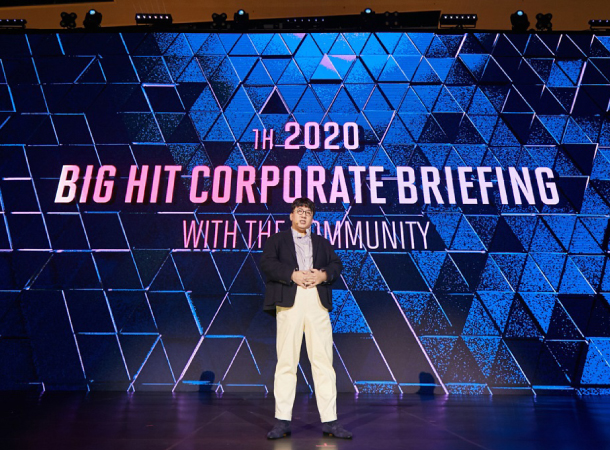 BTS’s home, Big Hit Entertainment, made 587.9 billion won ($494 million) in sales last year, almost twice as much as the year before, the company revealed on Wednesday.

The agency held its company corporate business briefing on Tuesday at the Dongdaemun Design Plaza, central Seoul, at which CEOs Bang Si-hyuk and Yoon Seok-jun discussed their “winning formula” for improving and innovating the local music industry.

“2019 was a time to realize the goal of innovating the music industry, which [we touched on] in our previous presentation,” Bang said.

The agency’s success came thanks to expanding its field of business by acquiring Source Music - home to girl group GFriend - and co-founding Belift Lab with CJ ENM, which helped to diversify their strategy, according to CEO Bang.

Co-CEO Yoon said that this year will be all about finding “Big Hit’s winning formula” to formulate a successful model and apply it to the artists of Big Hit’s affiliate companies.

“We will work together with artists in and outside of Korea in order to do so,” said Yoon. The first collaboration will be with boy band Seventeen of Pledis Entertainment, who will join BTS and Tomorrow X Together on Big Hit’s own fan community Weverse.

Choi Yun-hyuk, vice president of Belift Lab, announced the coming of a new multi-national boy band to debut within the year through a reality show on CJ ENM’s cable channel Mnet, while Source Music will launch a new girl group next year.

Big Hit Entertainment will also be launching new dramas, characters and items revolving around BTS. The first to come will be “Learn Korean with BTS,” a Korean-language education product using BTS-related contents. It will be released in March.