High-rate deals are being offered by many banks

High-rate deals are being offered by many banks

As savers receive near zero returns on their deposits - or sometimes precisely zero - any product that offers a decent rate is worth the trouble. Consumers are willing to jump through hoops and follow the fine print to beat inflation.

Despite usually offering the most anemic of returns, institutions are rolling out special limited products that offer higher rates on small deposits. Costumers are more than happy to take the bait. 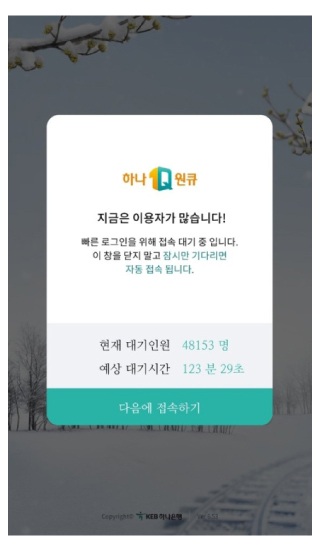 A screen capture of a pop-up page on the Hana Bank mobile app saying there are 48,153 people waiting in line to log in. [SCREEN CAPTURE]

On Monday, Hana Bank introduced an account that pays a maximum of 5.01 percent and is limited to one year.

It is a one-time deal that was offered for only three days, from Monday through Wednesday. News of the product spread by word of mouth, and some customers report waiting for hours to sign up for the promotional account.

While 5 percent looks like an attractive deal, up close, the income to the customers may not be all that significant, critics say.

“I can save the same amount if I stop drinking one cup of coffee every month,” said one commentator online.

Nevertheless, consumers are willing to wait in long lines. As of 5:40 p.m. Monday, just hours after the product’s release, 211,494 accounts were opened and the amount accumulated was 59 billion won, according to a Hana Bank official.

“All of my colleagues were on stand-by to sign up for this product, but I gave up on the first day because there were just too many people on the waiting list. I am going to try again early tomorrow morning,” said a 30-year-old office worker Kim Ji-hye on Monday.

Last July, Kakao Bank offered a savings product paying 5 percent with a cap of 10 billion won. It was a special gift for its bank customers to celebrate reaching 10 million members on the platform. It was reported to have sold out one second after the initial release.

The Industrial Bank of Korea also released a similar product with four percent interest in early January to a limited number of customers. Both were very popular.

Fintech companies are also trying to cash-in on the trend, prompting consumers to save less but more often. Kakao Bank and Finqq offered their own versions of a virtual piggy-bank.

Started last December, around 1.5 million new “piggy bank” accounts were opened on Kakao Bank’s platform. Finnq, an online bank, released an installment savings account which automatically takes an amount equivalent to 5 to 50 percent of each purchase and moves it to a savings account.

“Due to external factors such as the lowering interest rate, and news of huge losses from the derivative-linked funds [DLF] incident, consumers are refraining from making aggressive investment decisions. For the time being, penny-wise small-scale savings will continue to be popular among consumers” said an analyst.