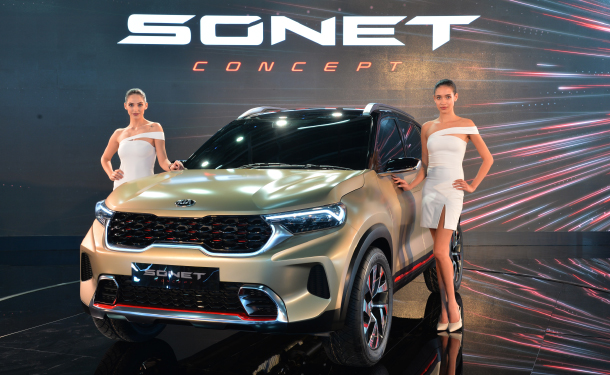 The Sonet concept is on display at the New Delhi Auto Expo running for a full week from Wednesday. The concept is a teaser for Kia Motors’ Sonet compact SUV slated to launch in India in the second half of this year. [KIA MOTORS]

Korea’s second-largest automaker by sales announced Wednesday that it unveiled the Sonet concept during the New Delhi Auto Expo, which runs through next Wednesday in Noida, India. The concept is a teaser for the entry-level, urban-style compact SUV, slated to officially launch in the Indian market in the second half of 2020.

The name Sonet is a mix of “stylish” and “connected,” Kia said in a statement, indicating that the new model will come with a strong design and the latest technological gadgets.

The Sonet will come with a 10.25-inch display-based remote car starting system, multicolor mood lamps, vertical air vents and high fuel efficiency, all of which are features targeting Indian consumers. The compact SUV will be eventually be sold in other Asia-Pacific markets.

The entry-level SUV is expected to feed on the high popularity of SUV models in India, which helped Kia Motors enjoy robust sales after it first entered the market last year.

In the five months since starting sales in August, Kia Motors sold 45,292 units of the Seltos SUV in India last year, which ranked as India’s second-highest-selling car in 2019. The Seltos helped Kia become the ninth-largest automaker by sales in the Indian market last year.

Kia is targeting to become one of the top three carmakers in India in terms of sales by 2022.

The multipurpose van was developed specifically for the Indian market based on its third-generation Carnival sold in Korea. The multipurpose van is marketed as a luxury vehicle option for Indian consumers, as it comes with a touch screen display for backseats, Napa leather seats and one-touch sliding doors.

More than 3,500 units of the van have been reserved since pre-sales started Jan. 21.

In addition to releasing new models, Kia Motors said it will increase its digital presence and expand into more cities to expand its footprint in the Indian market.

The automaker plans to establish 50 additional sales offices in India after creating a network of 265 sales branches in 160 cities last year.

Kia Motors is bringing in a digital channel that will assist Indian consumers through all parts of the sales and after-sales processes while creating an online sales channel.