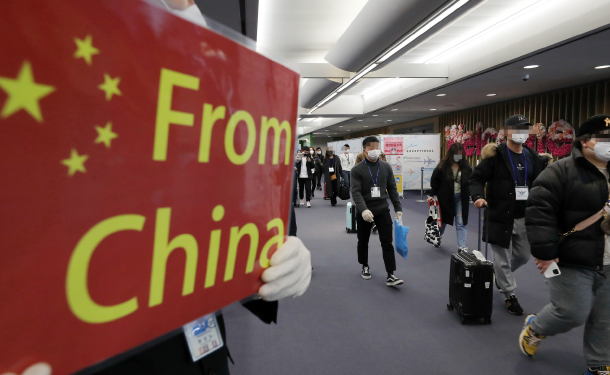 Passengers pass through a quarantine inspection and head to the China-only arrival counter at Terminal 1 of Incheon International Airport Wednesday amid strengthened measures to curb the spread of the coronavirus. [YONHAP]

Remarks made by the new Chinese ambassador to Seoul urging countries to abide by the United Nations health agency’s recommendations against travel restrictions amid the novel coronavirus outbreak have been drawing controversy, with contrasting reactions from the ruling and opposition parties.

Chinese Ambassador Xing Haiming on Tuesday urged countries to make a “scientific decision” based on the global health authority World Health Organization (WHO) recommendations against unnecessary interference in travel and trade, adding he would however refrain from further assessing of the Korean government measures to combat the virus. Korea from Tuesday restricted entry to foreigners who recently visited China’s Hubei Province.

The Chinese diplomat’s remarks at the rare press conference drew some backlash from the main opposition Liberty Korea Party (LKP), especially as Xing only took the post last week and has yet to present credentials to the Korean president.

LKP Rep. Shin Sang-jin, a four-term lawmaker who heads the party’s task force on policy to combat the coronavirus, said in a radio interview Wednesday that the remarks “by the Chinese ambassador to Korea who took the post just five days ago can be seen as disregarding Korea as a sovereign nation.”

He accused the government of being “pushed around” and pandering to China.

Lee Chang-soo, the LKP spokesman released a statement Wednesday expressing “regret that a foreign ambassador five days into the post evaluated a country’s measures on the protection of its citizens.”

In contrast, the ruling Democratic Party (DP) lawmakers took a restrained approach, saying they understood the overarching context of the ambassador’s remarks.

DP Rep. Song Young-gil, a four-term lawmaker and member of the parliamentary foreign affairs committee, pointed out in a radio interview Wednesday that the “Chinese Ambassador to the United States also made remarks criticizing U.S. measures.”

The United States has implemented a travel ban on foreigners visiting from China since Sunday.

Song added, “We can keep it in mind, but we don’t have to be shackled by it.”

Likewise, he said Xing holding a press conference even before presenting credentials to President Moon Jae-in could be understood as “relaying his position because of an emergency situation.”

When asked if Xing’s remarks could be construed as critical of Korean health authorities and intervening in domestic affairs, Song said, “We will not be affected and made decisions independently.”

DP lawmakers have previously been critical of U.S. Ambassador Harry Harris’s remarks seen to be meddling in sensitive sovereign matters like the deployment of Korean troops to the Strait of Hormuz and the bilateral defense cost-sharing negotiations.

Rep. Song during a radio interview at the time said that “the remarks were too excessive [and] not suitable for the position of an ambassador.”

Domestically, there have been calls for stricter measures to curb the coronavirus, such as restricting the entry of foreign visitors from all regions of China instead of just Hubei.

Prime Minister Chung Sye-kyun said Wednesday that Seoul will take “necessary measures” to check the situation in Hubei and surrounding areas at a meeting on the coronavirus outbreak.

The Blue House, government and ruling party in the meeting Wednesday proposed a new mobile phone app to keep track of the whereabouts of Chinese visitors while in Korea to help curb the spread of the coronavirus. This could serve as an alternative to a more extensive travel ban on China.

Currently, separate China-only arrival counters have been installed at airports to strengthen the screening process of travelers entering the country since the implementation of the travel restrictions from Hubei on Tuesday. Chinese travelers are requested to fill out health questionnaires and provide their mobile phone numbers and addresses in Korea and disclose if they have visited Hubei Province in the past two weeks.

However, the process of manually writing down phone numbers and checking if they work on the spot during the customs process has been proving cumbersome.

A DP member who attended the meeting told the JoongAng Ilbo Wednesday that the app is currently under development as a part of more extensive measures to help keep track of Chinese visitors.

The new process being reviewed will enable the Chinese visitors to install the government app on their mobile phones in order to help keep track of their locations while in Korea as it will have a GPS tracking feature to monitor the visitors during their sojourn.