No. 17 got the virus in Singapore

No. 17 got the virus in Singapore 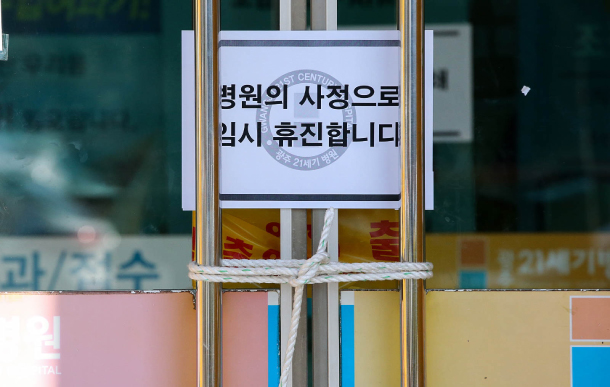 The Gwangju 21st Century Hospital in Gwangju is temporarily closed on Wednesday after Patients No. 16 and 18 were found to have been treated there. [JANG JUN-PIL]

Health officials said No. 17 might have contracted the disease from a Malaysian person in Singapore, who was recently diagnosed with the new coronavirus. Details of Patient No. 19 weren't released as of press time.

Officials from the Korea Centers for Disease Control and Prevention (KCDC) said Patients No. 1 through 19 were mostly in stable condition. All except Patient No. 2 are hospitalized in government-designated hospitals for isolated treatment.

Patient No. 2 was discharged from the National Medical Center in Jung District, central Seoul, Wednesday after the hospital said he fully recovered and was showing no symptoms of the virus. The doctor who treated him told reporters that there was very little risk of him transmitting the virus to others.

Doctors at the Incheon Medical Center said Wednesday that Patient No. 1, a Chinese visitor to Korea from Wuhan, Hubei Province, the epicenter of the coronavirus outbreak, was also improving significantly and might be discharged soon as well.

By Wednesday at 9 a.m., data from the KCDC showed 24,506 infections and 492 deaths across the world, mostly in China. Singapore had 22 infections, Thailand 19, Malaysia 10 and Japan 19. Two deaths were reported outside of China, one in the Philippines and one in Hong Kong.

He returned to Korea on Jan. 24 and felt a fever come on two days later. His body temperature reached above 39 degrees Celsius (102 degrees Fahrenheit). On Jan. 26, he went to Hanyang University Guri Hospital, but doctors didn’t suspect the new coronavirus because he hadn’t been to China recently, said the KCDC.

The KCDC, at the time, only told hospitals to categorize patients as “suspected patients” if they had a fever, breathing problems and had been to China lately. Based on this, Hanyang University Guri Hospital gave him a fever reducer and sent him back home, the KCDC said.

But Patient No. 17 wasn’t getting better. He went to two other hospitals after that, but it didn’t help.

On Monday, he got a call from the Malaysian person he went to the buffet with, who said he had been diagnosed with the coronavirus.

Patient No. 17 dialed his neighborhood’s community health center on Tuesday and told them the situation. He was immediately sent to Myongji Hospital in Goyang, Gyeonggi, a government-designated hospital for quarantine treatment for the new coronavirus, and test results turned out positive Wednesday.

In the case of Patient No. 18, health officials believe she contracted the disease from her mother, Patient No. 16.

Health officials have yet to disclose the specific travel routes of Patients No. 16 and 18 in Korea but said the mother and daughter visited Gwangju 21st Century Hospital for different treatments before they were confirmed to have been infected by the coronavirus later on. The hospital has been closed since Tuesday, when Patient No. 16 was confirmed.

Facing mounting criticism that the hospital failed to quarantine the mother and daughter earlier, Choi Min-hyok, head of Gwangju 21st Century Hospital, told the JoongAng Ilbo in a telephone interview Wednesday that it was the government who messed up. Choi said his hospital called Gwangsan District’s community health center last month to report Patient No. 16 as a suspected case of the new coronavirus so that she could be tested, but according to Choi, the health center told him she wasn’t eligible for a test because she had not come back from China.

Amid rising fears about tens of thousands of Chinese students returning to Korea this month following winter breaks, the Ministry of Education advised universities Wednesday to postpone their start dates for the spring semester by up to four weeks. The ministry recommended universities make up for missed classes by holding extra sessions during the semester or by offering online courses to students.

About 71,100 Chinese students were studying in Korean universities last year, accounting for 44.4 percent of all foreign students.

Seoul’s education office announced Wednesday that it ordered 42 kindergartens, elementary, middle and high schools in Jungnang District, eastern Seoul, and Seongbuk District, central Seoul, to shut down for a week starting today following reports from the government that Patient No. 5 roamed around those districts before getting quarantined.

The KCDC’s National Institute of Health said Wednesday it would kick off a research project within this month to develop a treatment and vaccine for the coronavirus.