Curl up with a good book all night long: These four guesthouses around the country are a bibliophile’s dream

Curl up with a good book all night long: These four guesthouses around the country are a bibliophile’s dream 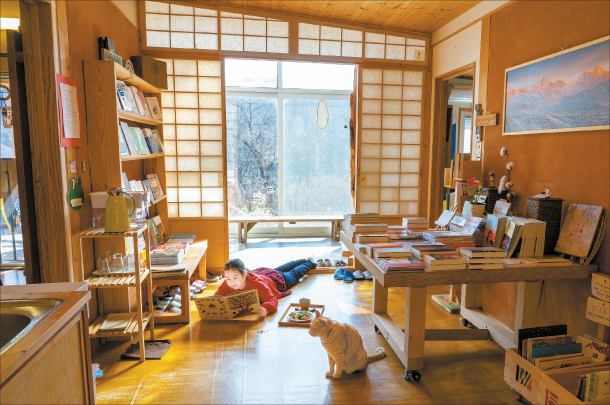 A child reads a book at Tudeukgol Book Shop in Wonju, Gangwon, which also runs a guesthouse for overnight guests. [BAEK JONG-HYUN]

Even though, according to 2017 statistics from the Culture Ministry, four out of 10 Korean citizens don’t read a single book a year, book lovers continue to create spaces where fellow readers can enjoy a book and get lost in stories. These days, some bookstores even operate as guesthouses as well.

Some book lovers have found homes that they fill with books and open up to visitors, while one luxury hotel is focusing on making more libraries inside. Take the weekend and visit one of these four book-filled spaces during your free time.

Many bookworms dream of reading a book in a tree house in the forest or falling asleep in a room filled with books from floor to ceiling. Any fantasy you have with books can come true here at this one-story house on Mount Myeongbong in Wonju, Gangwon.

Large windows surround the building so people inside can see the seasons change on the mountains and smell the trees. Every morning, sunlight brightens up every corner of the house. The house was built by designer Park Jong-seon, who made the furniture seen in the hit movie “Parasite.”

A couple who works as a publisher and a children’s book author turned the home into a bookstore that also functions as a cafe. They started the guesthouse service in 2016.

The cabinets in the kitchen in this house are not filled with dished but books. Each bookshelf has some sentences or phrases attached to it. In the children’s book section, one shelf reads, “The age range of the readers of the books with images inside is from newborn to 100.”

Don’t expect to be able to hear nothing but pages turning in this bookstore. The space plays host to many lectures on the humanities, and book clubs are often gathering. There are even architecture classes held at the store, and sometimes small concerts are held outside. Behind the bookstore there are some rocks for people to sit on while enjoying some live music.

The guesthouse is open to only one group per night. The owner couple leaves the house to visitors from 7 p.m. to 10 a.m. If you are a solo traveler staying overnight at the guest house, you have the privilege of enjoying the entire bookstore to yourself. There is a separate guest room, but you are welcome to lay anywhere you want inside the house.

From top: A visitor to Saenggak House in Yongin, Gyeonggi, reads a book in a cafe area; One of the owners of Book Seejum in Incheon organizes books; Visitors to the library at The Glass House at Walkerhill in eastern Seoul talk about their books. [CHOI SEUNG-PYO, BAEK JONG-HYUN]

On the north side of Mount Jeongjok on Ganghwa Island near Jeondeung Temple is a bookstore that also operates as a guesthouse. The bookstore is run by three book-loving friends whose nicknames are Dolgim (laver), Buchu (chives) and Wueong (burdock).

The story behind the bookstore is quite interesting. When Dolgim and Buchu were dating, they fell in love with Ganghwa Island while walking along the long road known as Ganghwa Nadeul-gil. After they got married in 2015, they were living in downtown Incheon, but they found some land they liked and made an impulse purchase, with the help of a large loan.

After that, they were looking to do something fun together on that land, and they decided to open a book stay in April 2019. The name Seejum came from Buchu - seejum means a starting point as well as one’s point of view - who loved how the word has two different meanings.

They thought it wouldn’t be financially viable to run only a bookstore, so the two decided to operate a guesthouse as well. Dolgim said most of the revenue comes from running the guesthouse for now, but they plan to boost book sales as well.

Dolgim used to be an editor at a newspaper, and he displays books as if he is laying out news articles. Near the entrance of the store are the shop’s best-selling books at the moment and a collection of light essays.

There are three rooms available for overnight guests, who can read the books that are on sale, as long as they keep them clean. The three friends run a blog to communicate with fans and take reservations.

The smaller the bookstore, the more the taste of the owner comes out. The owner of this bookstore, Im Hu-nam, is not only the president of a publishing company, but also an author of many poems, travel books and musical education books. The 57-year-old owner used to also work as a magazine writer.

The dream of running a cafe where Im could sell books in the countryside came true two year ago. Im bought a four-level house located between Mount Chilbong and Yongdam Reservoir after deciding to leave Seoul.

When a guest looks like they don’t know which book to pick up, Im offers to help them choose a book they would like. There are no new books at this store because Im wants to guarantee that what’s available on the shelves is informative or entertaining. The attention to detail has attracted quite a number of regular customers who come by often to check out what Im has put on the shelves.

The rooms here are very quiet. Each room features only a desk and a bed. On the balcony, guests can take in a beautiful view of a pine tree forest.

The building was renovated in 2018, and now the most eye-catching spot in the space is the library on the first floor. There are about 900 books organized by theme, and the owner of independent bookstore, Choi Ina Books, is in charge of curating books and choosing the book of the month. The music in the library comes from Tokyo’s popular Tsutaya bookstore. You can’t take any books to your room, but the library is open 24 hours a day.