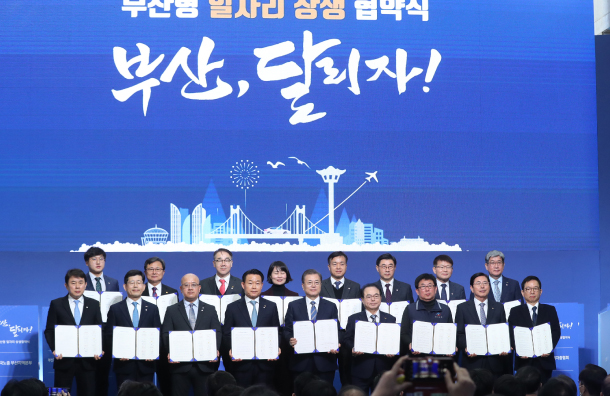 President Moon Jae-in, front row center, poses with other government officials at the Busan government complex on Thursday after announcing plans to create a manufacturing complex in the city. [YONHAP]

Busan held a signing ceremony Thursday for an electric vehicle component manufacturing complex that is supposed to create 4,300 jobs.

The southern port city is the seventh place in Korea to offer partnerships between the public sector, private sectors and regional labor unions to create manufacturing jobs, a joint venture model pioneered by the city of Gwangju in June 2019.

Other cities that have adopted similar programs include Miryang in South Gyeongsang, Daegu, Gumi in North Gyeongsang, Heongseong in Gangwon and Gunsan in North Jeolla.

In Busan, an affiliate of the automotive parts supplier Korens and roughly 20 business partners will be investing a total of 760 billion won ($642 million) between 2020 and 2031 to create 4,300 regional jobs in Busan’s international industrial logistics city.

The Busan government is offering investment subsidies, loans, buses to bring workers to and from the factories and 2,000 units in state-owned apartments for workers, as well as day care for their children. The labor union for the industrial complex has promised no labor disputes for five years. Technicians and researchers at the industrial complex will be restricted from applying for jobs at other companies for the next three years.

Korens was planning to invest in a facility in China. But last July, Busan approached the company’s chairman, Cho Yong-kuk, with the idea of a joint project.

“I gave it a lot of thought as China offered a bold investment proposal,” Cho said during a signing ceremony Thursday. “However, I made the decision with the future of Korea in mind.”

He said his company is a future-oriented globalized business that develops, manufactures and exports powertrains for electric vehicles.

“If the [Busan] industrial complex is a success, it will contribute significantly not only to the smart factory and artificial intelligence projects pushed by the [central] government, but also the autonomous vehicle and smart city project pushed by the city of Busan,” Cho said.

President Moon Jae-in attended the ceremony with 300 other people including Finance Minister Hong Nam-ki. The president praised the company’s decision to invest in Busan.

“The novel culture of harmony between labor and management that started with the joint regional job program [in Gwangju] not only turned around a Korean company that was planning to go abroad but has brought new vitality to investment,” Moon said. “This year, through more joint regional job creation, we will actually be able to feel the difference.”