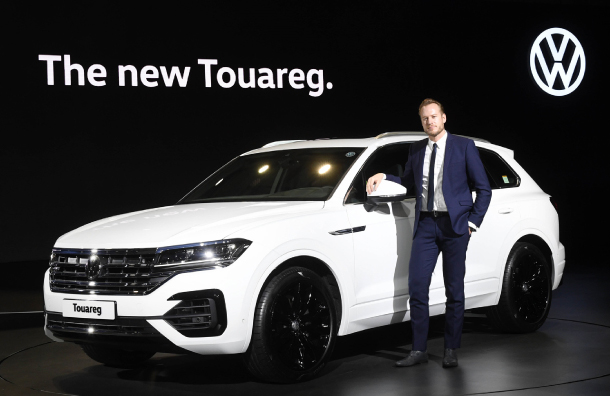 Volkswagen introduced the new Touareg SUV to the Korean market as it works to gain a stronger foothold in the luxury SUV market and as it continues its comeback from the 2016 emissions scandal.

The Korean unit of the German automaker announced Thursday that the third-generation Touareg has been upgraded with significant design changes and the addition of high-tech features.

“The Touareg has contributed to the development of the auto industry by presenting a new vision to the SUV market and global auto market,” said Audi Volkswagen Korea Executive Director Stefan Krapp during the launch event held at the Grand Hyatt Seoul in central Seoul.

Since the rollout of the first generation in 2002, more than 1 million Touaregs have been sold globally. While the first- and second-generation models were geared more toward sports and off-road capabilities, Krapp said the third generation added luxuriousness and digital-friendliness to better appeal to modern consumers.

All three versions being offered come equipped with a 3.0-liter V6 turbo diesel engine that is rated at 286 horsepower and 61.2 kilogram-meters (442.6 pound-feet) in torque.

In the second quarter, a new 4.0-liter V8 diesel engine will be offered in two limited-edition versions. That engine is rated at 421 horsepower and 91.8 kilogram-meters in torque.

The “Innovision Cockpit” has a 12.3-inch display dashboard and a 15-inch touchscreen display infotainment system. The “ergoComfort” implemented front seats can be adjust to 18 positions.

The new Volkswagen SUV comes with a range of high-tech safety features. It has collision avoidance warning and assist systems for all sides.

The latest from Volkswagen follows the automaker’s strategy to introduce five SUVs to the Korean market in recovering from the 2016 diesel emissions cheating scandal.

During a press event in September last year, Krapp said Volkswagen will try to tap into rising demand for SUVs in Korea by reintroducing the Tiguan and Touraeg SUVs while launching the T-Roc compact, midsize Teramont and Tiguan Allspace SUVs in 2020.

Krapp added that the Tiguan Allspace will be officially introduced in Korea in April this year.