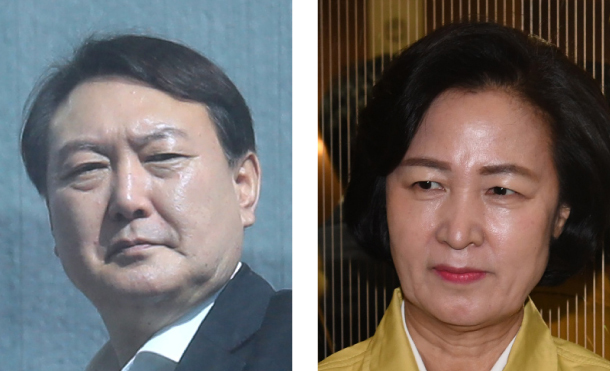 Justice Minister Choo Mi-ae made a rare visit to the prosecution on Thursday and asked Prosecutor General Yoon Seok-youl to cooperate with the administration’s campaign to overhaul the criminal justice system.

Choo made the visit before she attended the opening ceremony of a new office for the Justice Ministry spokesman, located inside the Seoul High Prosecutors’ Office. Sources said Choo proposed the meeting.

It is their second meeting since she took office on Jan. 2. The first meeting between Choo and Yoon was on Jan. 7, when Yoon visited her office at the ministry in Gwacheon, Gyeonggi, to extend a greeting.

During their meeting, Choo and Yoon were accompanied by their aides. According to Choo, she expressed her appreciation to Yoon for offering a space inside the prosecution building to open the new spokesman’s office.

Choo ordered the ministry to open the spokesman’s office inside the prosecution building, apparently based on the assessment that the administration was losing the public affairs war against the prosecution ever since it started a series of probes into key associates of President Moon Jae-in. Many journalists stay inside the press room of the prosecution headquarters to access information and maintain their contacts, while the ministry’s spokesman’s office was in a remote location at the Government Complex in Gwacheon.

The ministry will have two spokesmen, and one will stay in the new office at the prosecution to promote policies and contact with the press.

“There are many things that the ministry and the prosecution need to cooperate on,” she told reporters after meeting with Yoon. “The president has said we must maintain the state’s capability in investigations while pushing forward reform. So I told him that we should communicate and the opening of the spokesman’s office is meaningful in terms of communication. Yoon agreed.”

Both the ministry and the prosecution said their leaders did not talk about the latest controversy surrounding Choo’s unprecedented decision to stop the full disclosure of indictments of allies of President Moon in an election-meddling scandal.

On Jan. 29, the prosecution indicted 13 people including Ulsan Mayor Song Cheol-ho, a longtime friend of Moon, and former Ulsan police chief Hwang Un-ha as well as three former Blue House aides on charges of election law violation. The prosecution said Blue House aides had helped Song win the election in 2018 by triggering a police corruption investigation into his rival just three months before the race. The prosecution dropped the case in March 2019 and criticized the police for overreacting.

The Justice Party, a progressive political party and a strong ally of the ruling Democratic Party (DP), on Thursday condemned Choo’s latest move. “The ministry cannot avoid the criticism that it was attempting to hide something without legitimate justifications,” Kang Min-jin, spokeswoman of the party, said.

“If the contents of the indictment document [reported by some media] are true, the Blue House did abuse its power and influenced the election,” Kang said. “All suspicions must be investigated without any protection and the whole truth must be laid bare.”

The opposition Liberty Korea Party (LKP) stepped up its attacks. “President Moon must stop hiding behind a figurehead minister,” LKP Chairman Hwang Kyo-ahn said. “He must disclose the indictment in person and explain the charges to the people.”

The ruling DP tried to protect the administration. “When an indictment document is sent to the National Assembly, the entire text was often leaked to media immediately after the reception,” said Rep. Lee Hae-sik, spokesman of the DP. “Choo was stopping this wrongful practice. The ministry’s measure is actually belated. It doesn’t deserve any criticism.”

Choo continued to defend her decision on Thursday. After the opening ceremony of the new spokesman’s office, Choo told reporters that the ministry is trying to follow the constitutional principle of the presumption of innocence.

She also dismissed the criticism that the latest decision went against her past behavior. When she was the DP chairwoman, she attacked former-President Park Geun-hye in a post on her Facebook in November 2016 by quoting the indictment documents of Choi Soon-sil, Park’s close friend. “In the 30-page indictment, the prosecution called Park a co-conspirator, and sometimes the primary suspect,” Choo wrote at the time.

“It was a constitutional trial,” Choo said. “This case is a criminal case.”