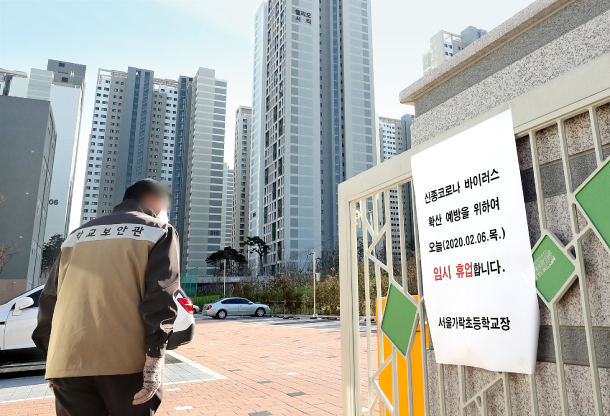 Garak Elementary School posts an emergency notice on its main gate informing students of a temporary closing on Thursday as a confirmed coronavirus patient was found to live in the neighborhood. Four elementary schools and one middle school in Songpa District, southern Seoul, shut down on Thursday. [YONHAP]

Four more people were diagnosed with the Wuhan coronavirus, bringing Korea’s total number of infections to 23.

Two were relatives of previously identified patients, one was an acquaintance, and Patient No. 23 was a Chinese national visiting from Wuhan, Hubei Province, the epicenter of the new coronavirus outbreak.

All 23 patients except Patients No. 1 and No. 2 are hospitalized in government-designated hospitals for isolated treatment and are mostly in stable condition. Patient No. 2, a 55-year-old Korean national from Wuhan, was discharged from the hospital Wednesday upon full recovery, health officials said.

Patient No. 1, a 35-year-old Chinese national also from Wuhan, was discharged from the hospital on Thursday afternoon.

Incheon Medical Center, where Patient No. 1 had been treated, released a photocopy of an English letter the Chinese patient wrote to her doctors, which read, “I have been deeply moved by your neighborliness. You gave me meticulous care. As the saying goes in Chinese, ‘The healer has benevolence.’”

She added, “To me, you are more than that. All of you are my heroes, and I will never forget this experience. I will learn from you and try my best to help others for the rest of my life. Thank you and your government once again for all you did for me.”

Patient No. 19, whose details were revealed by the Korea Centers for Disease Control and Prevention (KCDC) on Wednesday night, has been identified as a 36-year-old Korean national from Songpa District, southern Seoul, who visited Singapore from Jan. 18 to 23 for a conference with Patient No. 17, who was diagnosed earlier Wednesday.

On Jan. 22, the two ate at a buffet with a Malaysian national. On Monday, the two were informed that the Malaysian colleague contracted the disease. They contacted their local health community centers the next day, were put into quarantine and tested positive for the coronavirus Wednesday.

On Thursday, KCDC officials said it appeared Patient No. 17 was in the physical proximity of at least 188 people after he arrived at Incheon International Airport from Singapore on Jan. 24, traveled to Daegu on a KTX bullet train from Seoul Station in central Seoul and roamed around Guri, Gyeonggi, where he lives. His parents live in Daegu.

All 188 people will be quarantined for 14 days, the incubation period of the coronavirus.

According to the KCDC, the two live in the same building in Suwon, and so do six other relatives. After Patient No. 15 was diagnosed, the seven relatives were all tested Sunday, but results turned out negative. Nevertheless, they were still isolated at their homes and monitored by local government officials on a daily basis for possible symptoms.

On Tuesday, Patient No. 20 felt a sore throat. She tested positive Thursday.

Health officials said it was the second time after Patient No. 8 that someone tested positive for the new coronavirus after initially testing negative. Patient No. 8 was found to have visited a restaurant and a large supermarket in between the two tests, but Patient No. 20 stayed home, officials said.

Patient No. 22 lives in Naju, South Jeolla, and is the older brother of Patient No. 16 from Gwangju. On Jan. 25 when Korea celebrated Seollal, or Lunar New Year, a grand national holiday for family gatherings, Patient No. 16 and 22 visited their mother’s house in Naju. The two patients plus Patient No. 22’s wife ate together, KCDC officials said.

The news instantly stoked fears in the nation’s southwestern region, which has been waiting for health officials to disclose the travel route of Patient No. 16 - who appears to have wandered around the area for at least 10 days since she first started feeling symptoms of the virus.

Patient No. 22’s wife recently tested negative for the coronavirus.

KCDC officials have yet to disclose the specific travel route of Patient No. 22 and his wife, but details so far indicate they visited a supermarket in Naju on Saturday and Sunday and ate at a restaurant on Saturday afternoon.

Patient No. 16 is suspected to have contracted the disease during a trip to Thailand from Jan. 15 to 19. She said she felt a cold coming on from the evening of Jan. 25.

Officials from the Gwangju Metropolitan Government Office said Wednesday that Patient No. 16 appeared to have contacted at least 306 people from Jan. 25 to Tuesday, when she was diagnosed. That includes 272 people at Gwangju 21st Century Hospital, 19 at Chonnam National University Hospital, both in Gwangju, and 15 relatives.

No one except Patient No. 22, her older brother, and Patient No. 18, her daughter, have tested positive so far.

But the count doesn’t include people she came in contact with from Jan. 19 to 25, after she arrived in Korea from Thailand and before she started feeling the symptoms. Gwangju officials said they were investigating further.

KCDC officials said Patient No. 23, the latest patient in Korea to have been diagnosed, is a 58-year-old Chinese national from Wuhan, who entered Korea on Jan. 23 with six others to sightsee and visit a relative who’s studying at a local graduate school. She was said to have wandered around Seodaemun District, western Seoul, and Jung District, central Seoul.

The patient started feeling a fever on Wednesday and contacted health authorities.