Career saves record well within reach for the Eagles’ Jung

Career saves record well within reach for the Eagles’ Jung 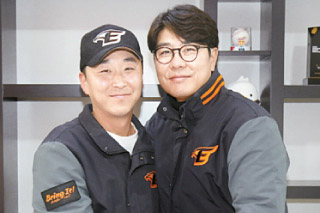 Despite missing out on the saves title last season, Jung Woo-ram of the Hanwha Eagles is top of the table after picking up the most saves in the KBO, 87, over the past three seasons.

Jung, who is turning 35 in June, chose to become a free agent (FA) once the season ended and successfully re-signed with the Eagles, agreeing to a four-year contract at 3.9 billion won ($3.3 million).

The Eagles struggled throughout the 2019 season and finished ninth in the 10-team league, with 58 wins and 86 losses. Although being given limited playing time due to the team’s performance, Jung still managed to play at his best and finished the season with a 1.54 ERA, picking up four wins, three losses and 26 saves.

He may have blown some saves in a few of the games, but he was evaluated to be consistent and very stable in his pitching. Due to this, Jung was able to sign his FA contract earlier than others.

By signing a new four-year contract, Jung has now earned another chance to achieve the record of picking up 200 career saves. Currently he is only 35 saves away from the feat.

Below are edited excerpts from an Ilgan Sports interview with Jung.


Q. Last season, it seemed like the young Hanwha pitchers had a tough season. What are your thoughts?

A. We played worse than the previous year, so I think we lost confidence. But to grow from here, they need to break down that wall. I encouraged them by saying that this can be a good experience. They are probably very determined not to repeat the same failure they did last year. All our pitchers need to be desperate to bring back the fans’ love.

Do you have any advice in terms of offseason training?

I don’t give any technical advice. Since they played one season, replenishing their energy is important. I emphasized that I didn’t want them to focus only on their pitching or gaining strength. I think young pitchers in their third or the fourth years have their own insights by now.

Will you be the Eagles’ pitching team captain again in the 2020 season?

In the upcoming season, [pitcher] Lee Tae-yang will be the captain [of the pitching team]. He’s at a point in his career where he can balance the veterans and the younger players. I think that there should be a leader from the younger players. In their process of becoming veterans, they need to learn. But I’m not going to care less. I’ll help a lot.

You are now back at the starting point. How do you feel?

Every season during this time of the year, I think I have the same goal to not get injured and secure my spot throughout the season. I’ve been preparing myself to bounce back quickly in terms of getting in a slump during the season physically and mentally. My goal is to have the strength to hang on.

That number wasn’t bad. But in terms of my pitching, personally I wasn’t satisfied. I couldn’t keep the balance in my pitching using my hip and torso. To throw more pitches this season, I’ll have to remedy that during spring training.

Our manager had been taking good care of me, but I always think that I can get on the mound even in the worst situation. When I have to get on the mound, before getting fully warmed up, during the eighth inning at one or two outs with runners on bases, I always do some image training.

You are only 35 saves away from picking up 200 career saves. It seems like it could be possible this season. What do you think

I feel like it was only yesterday when I picked up my 100 career saves. To be honest, I started thinking about it when I got to 150 or 160 saves. If I can continue being the closer, then it is definitely a record I want to achieve.