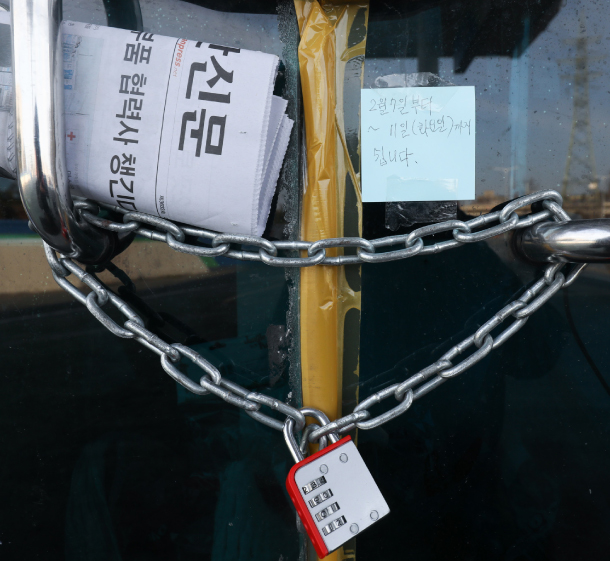 A store near Hyundai Motor’s factories in Ulsan closed on Friday after production lines were shut down in the wake of the Wuhan virus outbreak. [NEWS 1]


The government on Friday promised to support industries hit by the Wuhan coronavirus outbreak, especially the Korean automotive industry, which is having trouble getting parts out of China.

Meanwhile, the government made more promises to free up supplies of protective masks and hand sanitizers, two days after threatening to penalize hoarders with up to two years in prison or a maximum fine of 50 million won ($42,000).

On Friday, the government said it will negotiate with regional governments in China to reopen automotive parts suppliers who have shut down production as the coronavirus spreads.

“To stabilize our automotive industry’s short-term supplies, we will strengthen our talks with Chinese regional governments,” Finance Minister Hong Nam-ki said during an economic ministerial meeting held in Seoul.

Hong said the government is using the Korean Embassy in China as well as the state-owned Korea Trade-Investment Promotion Agency to convince Chinese authorities to reopen the plants.

The government said it will also work on securing alternative sources of supply from places like Vietnam, Cambodia and the Philippines.

To speed up the supply of parts from alternative markets, the government said it would cut red tape on customs processes.

If parts can’t be imported from another country, the government will offer short-term research and development support so that the parts can be made locally.

It will also streamline environment regulations that usually take two to three months.

The government will offer 11 trillion won in financing through state-owned financial companies - the Korea Development Bank (KDB) and Industrial Bank of Korea (IBK) - for investments in new equipment and machinery as well as plant expansion.

The state-owned banks will extend loans or loan guarantees for small- and medium-sized enterprises (SMEs) affected by the new coronavirus.

Additionally the Ministry of Employment and Labor said it will relax the 52-hour workweek regulations to allow overtime at automotive parts companies.

The government said 31 companies have expressed interest in extending their working hours, and two have formally applied.

“Through these measures we will quickly resolve the uncertainty in automotive parts supplies and normalize the production of cars,” said Minister of Trade, Industry and Energy Sung Yun-mo. “We will take every necessary action to minimize the negative impact on our industry and economy.”

Korea’s dependence on China for automotive parts has grown in recent years.

Hyundai Motor Group has 170 first- and second-tier partners that have 300 plants in China.

Since the Chinese government ordered a suspension of plants, Hyundai Motor has been stopping its production lines on a staggered schedule since Feb. 4. SsangYong Motor has also suspended some production.

For Hyundai Motor, a suspension of production for five days translates into a loss of 30,000 vehicles, or 600 to 700 billion won in revenues.

This has affected other Korean companies including Hyundai Mobis’s Ulsan plant as well as three Kumho Tire plants.

Moody’s on Friday warned of the impact of the coronavirus on the Korean economy.

“The outbreak of the coronavirus is credit negative for rated Korean companies in many sectors because it weakens consumer sentiment and spending inside and outside China and poses a risk of disruptions to production and supply chains,” the Moody’s report stated. “Among rated companies, those in the retail, auto, tech, refining, chemicals and steel sectors will be most affected.”

The impact of the coronavirus is threatening Korea’s overall economic growth, which the Korean government has estimated at 2.4 percent this year.

S&P Global Ratings in a report released on Friday estimated China’s growth at 5 percent this year, a revision from an earlier outlook of 5.7 percent, as a result of the new coronavirus.

“China accounts for one-third of global growth so a one percentage point slowdown in the country’s growth rate is likely to have a material effect on global growth,” said Shaun Roache, the Asia-Pacific chief economist for S&P Global Ratings. “The global impact will be felt through four real economy channels: sharply reduced tourism revenues, lower exports of consumer and capital goods, lower commodity prices and industrial supply chain disruptions.”

The government also laid out plans Friday to offer 1.9 trillion won in financing to SMEs affected by the coronavirus as well as low-interest-rate loans to small businesses in traditional markets that have been struggling with a drop in customers since the outbreak.

The government also plans to offer 20 billion won in loans with interest rates in the 2 percent range for smaller private businesses affected by the virus.

Additionally private businesses in 318 traditional markets will have access to 10 million won in unsecured loans whose maturity will be two years with an annual interest of 4.5 percent.

Meanwhile the government has decided to further tighten its regulations on hoarding of protective face masks and hand sanitizers.

Starting next week, all suppliers will have to report the daily amounts of protective masks that have been manufactured as well as exported to the Ministry of Food and Drug Safety.

Retailers have to report to the same authority when there’s a big purchase.

“Despite [the government’s] efforts to stabilize the market, the public’s worries over supplies of protective masks and hand sanitizers continue,” Hong said.

Protective masks and sanitizers have been selling as quickly as they are being stocked.

A woman in her 20s on Thursday first picked 10 or so KF94 masks off a rack at a pharmacy in Jamsil, southern Seoul. But she ended up taking all 20 of the masks.

Hyundai Home Shopping saw orders of 60 KF94 masks sell out in a single second after they became available at 3:30 a.m. Friday.